Kelly Reichardt makes films so keenly in tune with the natural world that it seems appropriate that the director of “Meek’s Cutoff” and “Wendy & Lucy” would turn to the world of eco-terrorism for her newest thriller, the excellent “Night Moves.” Her story of three people caught in a web of mistakes and distrusts may first seem like a departure from her more character-driven dramas but, trust me, it’s not. “Night Moves” eschews traditional tension-building through plot twists and betrayals to focus on its characters, as Reichardt uses her increasingly impressive sense of composition and intuitive pacing to slow burn the audience into a state of anxiety instead of manipulatively pushing them there.

“Night Moves” is about three people itching to make a statement in a world in which technology has overtaken agriculture. Josh (Jesse Eisenberg), Dena (Dakota Fanning), and Harmon (Peter Sarsgaard) are going to blow up a dam. The first half of Reichardt’s delicately timed narrative sees the planning of the event; the second details the inevitable fallout. Reichardt and her writing partner Jon Raymond don’t weigh their narrative down with political rants or environmental messages. These are people who have had enough and feel that protests are no longer getting the attention their issues demand. That's all you need to know. And that they're going to take action.

As with all of Reichardt’s films, it’s more about the journey than the destination. As played by Eisenberg with more subdued detachment than usual (and perhaps more than the part called for, especially in the final act), Josh is a deliberate, patient terrorist. Eisenberg and Reichardt sketch him too organically to call him calculated but Josh is definitely the most deliberate of the three terrorists. Harmon, as perfectly captured by Sarsgaard in what ends up being a disappointingly small role, is more able to adapt to the situation. Sure, the waiter who recognizes him during part of their journey could be a problem. As is the fact that Harmon knows the guy from his time behind bars, which he failed to disclose. But it's not a big deal. Josh is the one who needs every detail to fall into place; Harmon is the one who rolls with the punches. In between, we have the lovely Dena, closer to Harmon in her willingness to work with what she’s given, such as in a masterfully tense scene involving the purchase of fertilizer, but clearly drawn to the brooding, purposeful Josh.

Reichardt builds tension through the cumulative impact of seemingly minor moments. What will be the downfall of this trio? Will it be the aforementioned fertilizer scene? Will it be one of the people that they seem to always inadvertently run into as their plan materializes? Will one of the three leads destroy their plan or betray the other two? As one might expect who knows Reichardt’s films, the director avoids easy thriller clichés or even answers. Major events take place off screen. A key one in the final act is shot with close-ups of eyes and feet. In “Night Moves,” as in all of Reichardt’s films, it is not just the incident that matters but its build-up and follow-through. And, again, she makes a decision with her ending that will frustrate some with its ambiguity but thrill those willing to accept her desire to work more in ellipses than periods.

It should also be noted that “Night Moves” is a gorgeously composed film. Reichardt’s emphasis on the natural world in all of her films has led to an under-appreciation of her skills as a visual artist. As shot by the increasingly impressive Christopher Blauvelt (who also shot “Meek’s Cutoff” and took over for Harris Savides after his passing on “The Bling Ring”), "Night Moves" is one of the most literally dark films you’ll see this year. So much of it is lit by on-set sources like the dash of a car, the lights of a boat, the dim light of the moon, etc. This is not one of those awful blue-lit movies in which the moon casts a turquoise hue that one could read by in the real world. It is a film about people who move in darkness, willing to take chances for what they believe but only under cover of night. 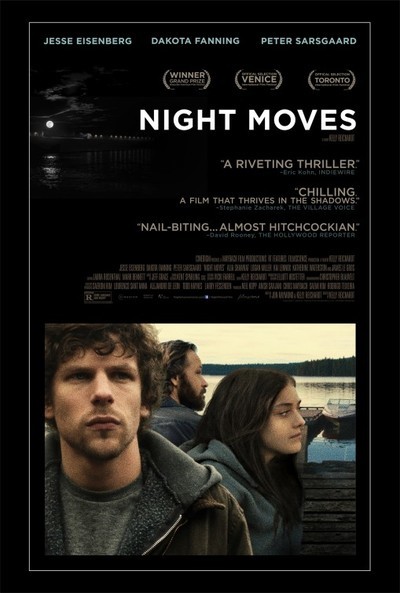 Rated R for some language and nudity.