Are you a fan of “A Fistful of Dollars”? Were you ever curious, watching that movie, about the guy who makes the coffins? Piripero was his name, and Clint Eastwood’s largely-taken-to-be-nameless character in that film really boosted his business when he breezed into the arid, sun-parched town of San Miguel and started shooting bad guys who had hurt the feelings of his mules, and then other bad buys besides. Eventually the two became pals, sort of, at least to the extent that Piripero abetted the stranger’s activities by sneaking him out of town in a coffin.

Other than that, the wizened, vaguely comical craftsman wasn’t much of a character. In “Never Grow Old” Emile Hirsch plays a much younger undertaker and carpenter, settled with his family in a town called Garlow, located, a title card tells us, on the California Trail. That trail extended from Western Missouri to Northern California, and while Northern California weather is decidedly different from that of the state’s southern regions, I reckon this environment is pretty far from the Sunshine State. The environs of this revisionist Western written and directed by the Irish filmmaker Ivan Kavanagh are relentlessly glum. Gray skies and mud abound.

Hirsch’s character, Patrick Tate, is/was a cog in Garlow’s slow-turning wheels, we learn after a prologue promising cathartic violence. After showing him presiding over a burial, the film presents the town’s fire-and-brimstone preacher discoursing, tiresomely, on how much better the town is now that liquor is banned. He prattles on about what it means to be in America and all that nonsense that contemporary writers of revisionist Westerns like to imagine unenlightened 19th century characters used to dribble back before everybody knew better. Except everybody doesn’t know better, is the point. And what a great point it is, one that no other movie has ever made.

The peace of the town is interrupted by the arrival of outlaw Dutch Albert, played by John Cusack, who’s dressed entirely in slimming black and often hides much of his face behind the large brim of his cowboy hat. Dutch is unimpressed with the town’s piety and reopens the saloon, soon turning it into a brothel. He also starts killing people, which ups business for Patrick. In the grand tradition of no actual criminal ever, Dutch takes an interest in the relatively virtuous Patrick. Noting that he is an Irish immigrant, he quizzes the undertaker on how he’s getting along in these United States. Does it bother him that the Irish are seen by other portions of the populace as “savages?” Finally, he asks, “You think a decent, honest man like you can be friends with a guy like me?”

Patrick’s wife Audrey (Deborah Francois) cocks an eyebrow at such an alliance, which of course is bound for ruin.

This strain of “revisionist” Western—stolid, earnest, glum, determined to punish the viewer by sucking the marrow of potential entertainment value out of its storyline—strikes me as perhaps the most unnecessary genre variant. And as revisionist as it might aspire to be, “Never Grow Old” is rife with clichés, Cusack’s philosophical villain one of the most conspicuous. “Sometimes I think the whole world is strung together by lies. But I’m not gonna lie to you, Mrs. Crabtree. I’m gonna kill your husband,” he says at one point, going on to repeat that “Dirty Harry” line about blowing a head clean off. As Eli Wallach said in another Sergio Leone Western (and how fondly I do remember the pronounced lack of speechifying therein), “When you have to shoot, shoot. Don’t talk.” 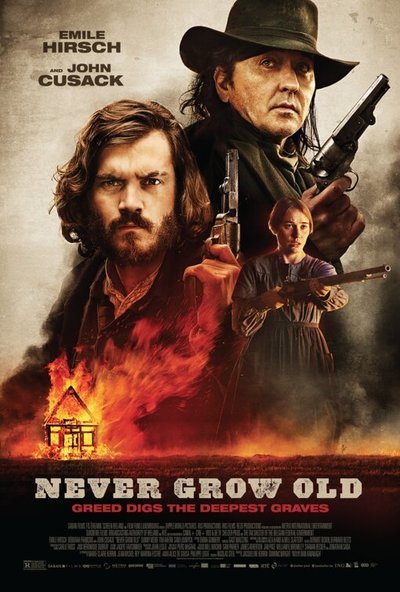