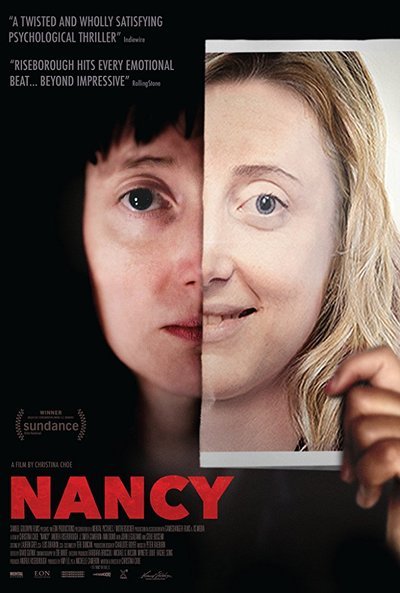 Writer/director Christina Choe, here making her feature debut, frames the first half hour or so of “Nancy” in a boxy, Academy-ratio format. It’s a suitable cage of sorts for the title character, played by Andrea Riseborough. In her mid-thirties, whippet thin and sporting a shag of jet-black hair, she is not a person who projects a lot of confidence and doesn’t seem to have much reason to.

She lives in a filthy hovel in upstate New York with her mom (Ann Dowd), who suffers from Parkinson’s disease. Their TV is a CRT type; the house’s climate control is a plastic fan. Nancy works at a local dentistry mill, and regales her colleagues with tales of her vacation in North Korea—one that we are apt to believe she did not, in fact, take.

Nancy’s imaginative life is pretty active. Her glove compartment is filled with short-story rejection letters, the latest one from The Paris Review, showing she aims pretty high at least. But she also keeps a blog, written under an assumed name, concocting tales concerning the birth and death of a child. Through this guise, she connects with and meets a bereaved father (John Leguizamo) and fools him into thinking she is once again pregnant. This ruse has consequences when they meet again by happenstance.

In her own little corner Nancy can’t, or at least doesn’t, do a whole lot of damage, but you get the sense that she could be very bad news for someone. After her mother dies, Nancy gets it into her head that she could instead be very good news for a bereaved couple a few hours’ drive away.

Ellen and Leo, played by J. Smith Cameron and Steve Buscemi, are a couple of kind, cozy academics who, 30 years before, lost their five-year-old daughter. In that she disappeared. They go on television to promote a scholarship they set up in her name. Watching the report, Nancy is transfixed. When a simulated picture of what girl, Brooke, would look like today, is put on screen, Nancy is overwhelmed. The “adult” Brooke does indeed look an awful lot like Nancy.

Nancy calls the couple’s home, speaks to a shocked and initially put-off Ellen, but talks her way into a visit. She packs a few clothes and the only object of meaning left to her—of course it’s her cat.

Around this time, unnoticeably, the movie literally opens up. The frame widens, and the rest of the movie plays out in a standard 1.85 format. In the Xavier Dolan movie “Mommy,” the director kept most of the movie in a narrow aspect ratio except for one scene set to an Oasis song in which the movie goes very wide, then shrinks down again. Dolan’s trick was to remind the audience who’s boss, a typically obnoxious move by a typically obnoxious filmmaker. Choe’s “opening up,” on the other hand, signifies just that and keeps the audience suspended—there are a lot of questions to come.

Including just what Nancy’s intentions are. As played by Riseborough, Nancy has a quiet, wide-eyed intensity that’s just this side of scary. Cameron and Buscemi, on the other hand, are warm, friendly, accepting. One is more accepting than the other; Ellen is practically ready to make Nancy family as soon as she moves in, while Leo, tiptoeing around his wife’s expectations and clear fragility, is more skeptical. He’s also allergic to cats, which makes the presence of Nancy’s beast a sticking point and eventually a plot point.

The filmmakers—it’s worth noting that this is a movie whose behind-the-camera creative team is almost entirely female—enact a strange but ultimately successful balancing act; the tension as the trio awaits the DNA test that will reveal if Nancy is indeed Brooke has a pall of dread over it. But what the film is finally about is not whether or not Nancy will inflict damage, but whether these lonely people can receive true grace. In this respect and several others, “Nancy” exhibits a seriousness of purpose that’s rare in American movies today.

Rock and Roll Me: On Andrea Riseborough's Spellbinding 2018 Performances