My Entire High School Sinking Into the Sea

“My Entire High School Sinking Into the Sea,” Dash Shaw’s debut feature, strives for spectacle with its patchwork animation style. Animated by Shaw and Jane Samborski, his wife and credited lead animator, “High School” prominently features a grab-bag visual aesthetic, complete with wiry hand drawings, gouache-painted backgrounds, and Ralph Bakshi-esque psychedelic abstractions. It takes its stylistic cues from a variety of sources, including German expressionism (particularly the frequent silhouettes) and "A Charlie Brown Christmas." A graphic novelist by trade, Shaw has clearly transferred his well-honed artistry on the page into widescreen compositions, and if any of the above descriptions sounds superficially exciting, “High School” is well worth seeing on the big screen.

However, the animation’s novelty wears off long before the film concludes, even at its brisk 75-minute running time. Though certain scenes have lasting imagery—Shaw and Samborski frame an elevator shaft with borderline-religious beauty—“High School” often defaults to maximalist chaos, even if the animation itself has a lo-fi, minimalist sensibility. In short, the imagery blends together often in self-defeating ways. When everything feels broadly “dynamic,” it becomes harder and harder to pinpoint specific achievements, and subsequently the whole tends to fade even when the parts excel.

“High School”’s stale high school narrative doesn’t help matters either. The film follows sophomores Dash (Jason Schwartzman, working well within his wheelhouse) and Assaf (Reggie Watts, warm and friendly), best friends and on the writing team for Tides High School’s newspaper. The two are a classically unpopular duo—Assaf has a genial, well-meaning personality that’s frequently impeded by Dash’s arrogant, chip-on-his-shoulder posturing. When Assaf embarks on a burgeoning romantic relationship with the newspaper’s editor Verti (Maya Rudolph), it sends Dash into a rage spiral as he fears that their friendship will soon break apart.

Things get worse when Dash discovers that the school isn’t up to “earthquake code” and will collapse into the sea once they open the brand-new auditorium. Dash’s pleas fall on deaf ears, and before long, an earthquake sends the school into the water and as a result everyone into a mid-‘70s Irwin Allen film. To escape their doomed high school, Dash must work together with Assaf, Verti, popular girl with a heart of gold Mary (Lena Dunham), cynical druggie Drake (Alex Karpovsky), and the gruff but powerful Lunch Lady Lorraine (Susan Sarandon) before it’s too late.

It’s one thing for the adolescent plot to be so tired that it’s basically indistinguishable from any past or present teen soap, but the disaster plot never quite excites either beyond Shaw’s willingness to tackle the real threat of death in a school setting, albeit with a morbid sense of humor. “High School” dramatically adopts a video game’s forward motion, as the gang must reach the roof by passing through floors that each contains a different grade of students. They encounter different obstacles along with a variety of faces, both sinister and welcoming, such as an obnoxious golden boy senior (John Cameron Mitchell) and the one-eyed negligent principal (Thomas Jay Ryan). Like other propulsive disaster films (Bong Joon-ho’s recent “Snowpiercer” comes to mind), the action moves at a clip, stopping only for appropriately timed emotional appeals and exposition dumps. While the high school melodrama dovetails nicely with the absurdist action drama, there are still no real surprises here. Death is narrowly avoided, at least for our heroes. Relationships are mended. Friendships are formed. Redemption is achieved. And so on and so forth until the credits roll.

It’s not like a trope-laden story registers as a high crime or anything, but there’s little to recommend beyond the intermittent delights of the animation and the impassioned voice work, especially from Sarandon, who embodies an ass-kicking, self-serious school employee like a pro. Shaw’s characterizations might deviate from the norm ever so slightly, but they are still too beholden to mid-‘00s indie clichés of the earnest, twee variety. The droll humor never livens the action up as well as it should, and it’s not helped by the dialogue’s stilted rhythm. There are some nice concessions to teenage reality, like an explanation of the “placeholder friends” concept and a gross, yet fairly heartbreaking flashback to Dash and Assaf’s Boy Scout days, but not nearly enough to provide it with much specificity. “High School” might dazzle some, but in the words of a fictional New York Times review that’s quoted in the film, it “ultimately falls short of its grand ambition.” 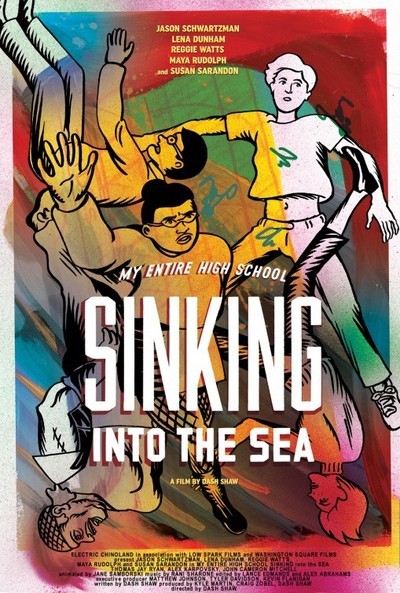 My Entire High School Sinking Into the Sea (2017)

Rated PG-13 for some images of peril, sexual references and drug material.