In 2015, "Mouthpiece," a show written and performed by Norah Sadava and Amy Nostbakken, premiered at The Theatre Centre in Toronto as part of the Why Not Theatre residency program. Nostbakken directed, as well as composed the music. Taking place in and around a bathtub on an empty stage, Sadava and Nostbakken, in white bathing suits, played different fragments of the same woman, as she struggles with life, personal problems, men, family. "Mouthpiece" was just over an hour long, and often featured the women moving in tandem (you can find clips on YouTube). "Mouthpiece" won all kinds of awards, and was eventually brought to Los Angeles by Jodie Foster, who had seen the show while on vacation in Canada. It has now been adapted into a film, directed by Patricia Rozema ("Into the Forest"), with both Sadava and Nostbakken playing the roles they created. The original idea was built as a performance-art piece, and is so high-concept, so abstract, you might think it wouldn't work in a cinematic context. But Rozema, Sadava and Nostbakken have done a beautiful job moving this material into the "real" world of cinema—cinema is a much more literal space than theatre. They've kept the concept intact, and they have a lot of fun with it, finding ways to make it visual. Best of all, they haven't sacrificed emotional impact. "Mouthpiece" is a deeply moving piece of work.

Cassandra, a 30-year-old woman living in Toronto, wakes up one morning, hungover, to the horrifying news that her mother—who had sent her a series of rambling voice-mail messages the night before—died of a stroke. Now Cassandra has to get herself together to plan the funeral, flowers, food, eulogy. She's not ready for any of it. None of us are, when the moment comes.

"Mouthpiece" unfolds over the couple of days leading up to the funeral, with flashbacks to Cassandra's childhood, living in the shadow of a mother (Maev Beaty) who has given up her career as a writer to raise children, and clearly has a lot of ambivalence about it, ambivalence which she passed on. The solemn-faced child Cassandra (not yet "split off" into different selves) observes her mother, catching glimpses of adult misery: her mother crying at night, or—in a crushing moment—dropping her writer's notebook into a bowl of soup she's cooked for her kids. The child absorbs the adult's anxiety. The main struggle Cassandra has is writing the eulogy (which nobody in her family wants her to do. They fear she will make a scene). The two Cassandras riff on their mother as they bicycle around Toronto, throwing out ideas, at a total loss as to how to sum her up: "She made pie." "She was a hardass." "She was a doormat."

What makes this material charged and exciting is Rozema's approach, and the performances of Sadava and Nostbakken, not to mention the many ways they find to portray the "conceit" of having two women playing one role. The women move in unison, creating a strange doubling effect, and Rozema and cinematographer Catherine Lutes double it up further, using mirrors and beveled glass in many scenes, fracturing the faces into fragments, or reflecting them into infinity. Sometimes one of the women is "sent forward" to deal with a certain situation, almost like "I got this one," while the other hangs back. They trade off "mouthpiece" duties. One has to deal with the brother. The other handles the florist. There's one scene with a sometimes-boyfriend where the women share duties (this is a brilliant scene, portraying self-consciousness in the most literal way: "What is that face you're making right now? Where did you learn that?" asks one of the women, observing her "other" in action with the boyfriend). The women push their hair back together, trip over their dangling scarves, curl up in the tub together, their bodies curling around each other protectively. Eventually, they come to blows, in a highly stylized sequence that builds on all that came before.

Throughout, other issues come up: eating French fries in public, the ridiculousness of Spanx, the objectification of women, catcalls from men. A guy on a scaffold shouts "You look pretty good!" at them, and one of them responds with, "Go fuck yourself" while the other smiles and says, with what looks like true appreciation, "Thanks!" These are moments where the "conceit" works best, where the idea of women split off from their natural responses, fractured into separate voices, is made palpable. There are a couple of full-on musical numbers, too, "All That Jazz"-inspired, as Cassandra attempts to imagine a proper eulogy for her mother. The play has been opened up to include more characters, a friend, the brother, the boyfriend, the father. Some of these characters feel shoehorned in, particularly the best friend, but it's a small lapse. Music composed by Nostbakken, and performed by Nostbakken and Sadava, swoons throughout, and since it's just vocals without words it makes an eerie counterpoint.

"Mouthpiece" is the kind of movie-going experience I love. I felt a similar way about Celia Rowlson-Hall's "Ma" from 2016, which I also reviewed. "Mouthpiece" so clearly comes from a very authentic place. These two actresses/writers wanted to create a piece about their experiences, right now, in today's world. They have put their whole lives into "Mouthpiece," everything they know, everything they don't know, everything they're attempting to understand. I appreciate so much those who grapple with things, those who aren't certain 100% of the time. Needing characters—particularly female characters—to be strong all the time is just as limiting as any other kind of stereotype. Being vulnerable is not being weak. Not knowing what to do is not being weak. It's being human. In an increasingly corporatized world, where franchises suck up all the oxygen, where small personal films can barely get made anymore, "Mouthpiece" vibrates with the urgency behind its shared expression. Nostbakken and Sadava had something to say, and found a unique way to say it. The existence of a film like "Mouthpiece" is a small triumph for art. 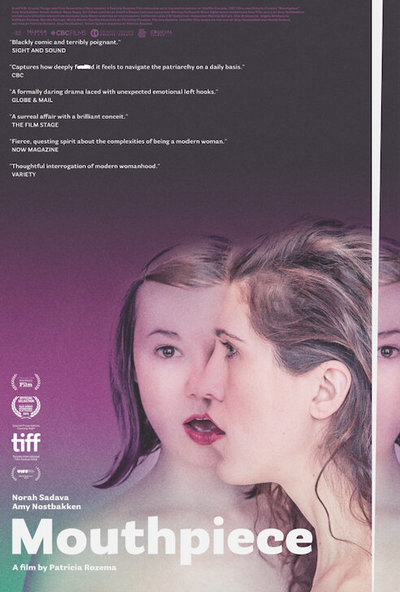