Mountains of the Moon

Based (quite faithfully) on Bibhutibhushan Bandyopadhyay's beloved novel, the long-awaited film "Mountains of the Moon" (2013) ("Chander Pahar") mirrors its protagonist's adventure in terms of scale: It's both one of the most expensive Bengali-language films ever made and is shot almost entirely in South Africa. The story—detailing young Bengali Shankar Roy Chowdhury's time in early 20th century Africa, when danger finds him at his quiet job at a remote railway station, after which he goes out in search of more in the company of a Portuguese adventurer whose life he randomly saves—is rich with event, and certainly the stuff of a classic adventure yarn. There is, however, more to a movie than its script. Someone, at some point, has to film it, and there is where things go wrong.

Considering that "one of the most expensive Bengali-language films ever made" cost a mere $2.5 million US, beating it up over the terrible digital FX would be a little unfair, especially considering that some of the effects, like a particularly lengthy volcanic eruption, look faintly Ray Harryhausen-esque if you squint, which is an asset to the type of old-fashioned adventure picture "Chander Pahar" sets out to be. The guilelessness of the presentation is as well, aided immensely by a sincere and warm performance as Shankar by Dev, one of the biggest stars of the Tollywood (that's the Bengali Hollywood) film industry and rightfully so.

Where the film stumbles—or more accurately, never stands up at all—is in the direction. I have admittedly not seen Kamaleswar Mukherjee's first two films, and so can't speak to whether this is an issue with his filmmaking in general, or whether this is specific to the challenges of working on a larger-than-customary scale in a foreign country, but literally every aspect of the work he does in "Mountains of the Moon" fails. The compositions are dull. The scenes are flimsy and shapeless. The pacing is the direct antithesis of what normally induces the excitement of adventure. Continuing the litany would be gratuitous except to point out one recurrent peculiarity, which is that the world of "Mountains of the Moon" is one in which guns can apparently only be fired after running slowly for five minutes and then jumping, twisting backward, and firing two shots that miss by a mile. (This happens several times; it never occurs to anyone to stand, distribute their weight evenly, and aim for the center of their target.)

A byproduct of "Mountains of the Moon" lacking the narrative drive to be a successful adventure movie is that it allows for far too much time to contemplate some of the less savory aspects of the genre. To wit, old-timey adventure yarns, be they set in Africa or elsewhere, all too often feature horrible racial stereotypes, and this is no exception, featuring tribespeople identical in every regard to their counterparts in movies seventy-five years ago. There's one conversation between Dev's Shankar and another Indian, in Africa with the British Army, about colonialism, but the story drops  the subject immediately, never to return to it. There's also a distinctly anachronistic attitude toward humanity's relationship with nature, one manifestation of which will get the movie off to a rocky start with any animal lovers. These complaints aren't necessary related to the technical quality of the movie itself, but it's pointless to pretend that we watch movies in a vacuum.

That last point carries over to the question of whether or not one grew up with the book. If yes, "Mountains of the Moon" is doubtlessly essential viewing, and many of the directorial missteps may very well be irrelevant in the face of finally getting to see the story on the screen after all these years. Absent that, there isn't much to recommend the film, which only escapes being truly awful by a complete absence of meanness and a compelling lead performance by Dev. 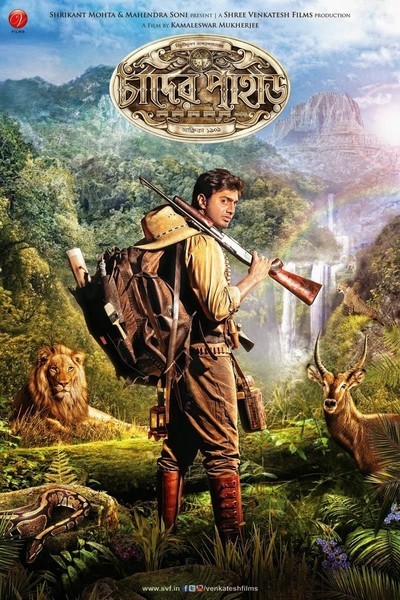