"In another country, with another name, maybe things are different, maybe they're the same." - Brian Eno, "Mother Whale Eyeless"

As of this writing, the affable Chinese blockbuster fantasy "Monster Hunt 2" has demolished opening day records in its native country: $97 million today alone. (1) This comes two weeks after the film's pre-sales reportedly hit $11 million. (2) It's also roughly two years after the release of the first "Monster Hunt," another family-friendly action-comedy that follows cuddly computer-generated monsters as they frolic about their forest home and chase live-action Chinese and Hong Kong comedians and marquee stars.

"Monster Hunt 2" offers a lot more where that busy, good-natured mess came from. It just happens to be raking in enough money to give "Black Panther" some decent international competition this weekend. The target audience for "Monster Hunt 2" knows very well what the film is, and probably whether or not they're going to enjoy the film. Everyone else probably hasn't even heard the title mentioned in passing.

Which is strange because, in this country, most discussions about popular foreign films begin with a tacit conflation of the film's inherent merits, and its cultural footprint. If it's bad, but big, it has a far greater chance of being treated as an event than if it's good, but small.

Then again, "Monster Hunt 2" isn't being actively promoted to Western audiences, nor to anyone beyond its established Chinese-American audience. Why should they? The Chinese box office is still poised to overtake the waning American market some time very soon. And "Monster Hunt 2" probably won't change your mind about Chinese or Asian pop culture. It's not a cultural ambassador, but rather the kind of crowd-pleaser that a snotty American distributor probably would have deemed to be "too regional" for a mass audience ten or twenty years ago. It’s the kind of movie that might not have even been released in a few theaters nationwide. The kind that sells out a 3:30pm show on opening day at Manhattan's AMC Empire 25, the bedbug-plagued multiplex that has become many Asian film buffs’ last year-round bastion for popular Chinese, Korean, Indian, and sometimes Japanese films.

Still: all this fuss for a cutesy kid's film? Pretty much, yeah.

"Monster Hunt 2" is charming enough on a scene-to-scene basis that its success is worth noting. Director Raman Hui (co-director of "Shrek the Third") and screenwriter Alan Yuen peddle kid-friendly conservative values: The nuclear family is sacred! Not all authority figures are bad! Money can't replace good relationships! And they do so with a smile, and a lot of goofy, but pleasant jokes. Many scenes revolve around happily-married, monster-hunting couple Huo Xiaolan (Bai Baihe) and Song Tianyin (Jing Boran) as they attempt to re-unite with Wuba, their lovable adopted squid-monster baby. Xiaolan and Tianyin are just one of a handful of interested parties who are looking for Wuba, including cocky gambler Tu (Tony Leung Chiu-Wai) and his chubby monster companion Ben-Ben. Tu inevitably learns from Xiaolan and Tianyin's example, and realizes that the money he needs to dig himself out of his massive personal debt can't make him happy in the same way that a good relationship can.

As you may have guessed by now, "Monster Hunt 2" is an entry in the burgeoning sub-genre of fluffy, innocuous kiddie blockbusters. A small but noteworthy amount of charm sets this disposable bauble apart from other films that came before it. For starters: Wuba is genuinely cute. He coos and giggles with enough abandon that you want to half-strangle and half-embrace him every time he's on screen (and that is often). Baihe and Boran also have low-key on-screen chemistry, and they earn belly laughs just by bickering like a much older, married couple, as when she jokingly dismisses him by saying he should stick to giving birth to monsters (as he did in "Monster Hunt") or when he teases her for shamelessly flirting with a weapon-smith ("I can see you haven't washed your hair in two months. You must be the kind of man who focuses on the big picture!").

Leung, perhaps best known to American audiences for his smoldering dramatic role in "In the Mood for Love," does a fine job with goofy material. His mugging is never distractingly excessive, nor is it too light to be notable: the man is clearly committed to his silly part, as we see every time he sweats, and cajoles his way out of trouble. Wuba and his friends are also notably more charismatic than they were in the first "Monster Hunt," possibly because more money was invested in their design and development.

All of which to say: "Monster Hunt 2" isn't a game-changer, and it doesn't have to be. The independence of the mainland Chinese audience is quickly becoming self-evident. Soon, China's box office will play a larger deciding role in American blockbusters successes. And there won't be a reciprocal component to that. A film that many of you won't have the chance to see in theaters is about to bust open a major market like an over-stuffed piggy bank. And its success will be largely covered in trend-pieces that consider its worthiness in abstracted terms of timing, marketing strategy, and general audience appeal.

Still: "Monster Hunt 2" is equally charming, sweet, slight, and unmemorable. It will also make truck-loads of money, and inspire at least one more sequel. But by now, you either already knew that, or simply don't care. There's no such thing as critic-proof movies, just films that we don't care enough about to consider. 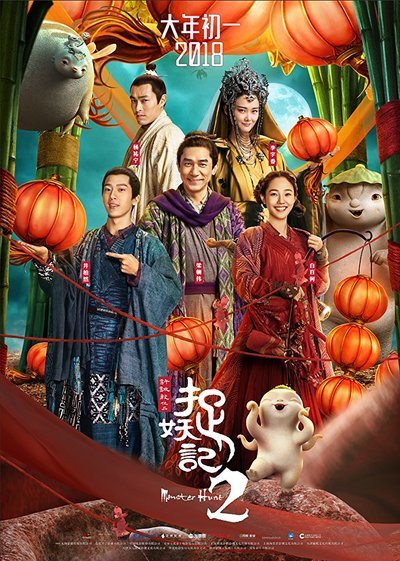