For the sake of full disclosure, I should begin this review of the exciting War of 1812 revenge-thriller "Mohawk" by saying that I'm friends with director Ted Geoghegan and his co-writer Grady Hendrix. This, admittedly, means that I tend to forgive their scrappy little genre hybrid's rougher patches. It also means that I tend to value their chutzpah more than their ability to fully develop the world of avenging heroine Oak (Kaniehtiio Horn), a young Mohawk Indian who is targeted and hunted by a group of blood-thirsty American deserters.

Geoghegan and Hendrix have the right instincts, which goes a long way, given that their vision is slightly limited by their budget. I didn't just fall for this type of film: I also admire its creators' knack for conveying what they like most about their characters through pulpy dialogue, impressive shot choices, and satisfyingly gory set pieces.

Oak is not, after all, a typical western heroine. She's one-third of a menage a trois with reserved Mohawk Calvin (Justin Rain) and jittery British arms dealer Joshua ("Twin Peaks" star Eamon Farren). This relationship is remarkable for a couple of reasons, the chief one being the way that Geoghegan and Hendrix gently defy decades of generic expectations that have taught us to favor Calvin and mistrust Joshua. Calvin is, admittedly, the more sympathetic of Oak's two lovers. But Joshua isn't just another self-involved exploiteer. Which thankfully means that Oak's faith in Joshua and the new settlers who inevitably decimate the Mohawk tribe is thankfully not dismissed as proof of her naive faith.

That said: "Mohawk" is also thankfully not "The Last of the Mohicans" meets "The Dreamers," but rather a little melodrama that quickly shifts gears into war/horror territory. Instead, Geoghegan and Hendrix quickly establish Oak, Calvin, and Joshua's fragile bond in a handful of small scenes. These young lovers quietly lavish attention on each other simply by staring, embracing, and getting high together in (perhaps too-tight) extreme close-ups. And for a while, you can buy that this type of relationship was normal for these characters.

But Oak is soon confronted by blood-thirsty American Hezekiah Holt (Ezra Buzzington), and his small band of misfit deserters. These stereotypically ugly Americans are portrayed with a little too much broad, goony humor, especially since they are often as freakish as they look and/or act. One of them (Robert Longstreet) has a a Don Van Vliet-style croak of a voice, and a clunky, steam-punk-worthy set of goggles covering half of his face. Another one (Jon Huber) is seemingly covered from brow to chin (and beyond) in facial hair and/or sweat. And don't get me started on the shy one (Rian Johnson regular Noah Segan) who predictably dies early on.

That said: Geoghegan and Hendrix do deliberately strip away their baddies' ranks so that their most sympathetic antagonists disappear first, leaving behind only the most unlikable antagonists to fend for themselves. In this context, Huber's character, an overwhelmed grunt, looks better than some, but worse than others simply because he failed to take steps to help Oak and/or stop Holt. Even the villains are sympathetic enough to be compelling, despite some sketchy details.

Still, the fact that these characters can essentially be boiled down to first impressions says a lot about this film's point-of-view. Holt's desperation eventually becomes more sensible: he thinks he's the victim. But "Mohawk" is really Oak's story, so it's fitting that Holt's gang has the kind of paradoxical flat-ness and immediacy that monsters often do in our nightmares.

You can see Geoghegan and Hendrix's flinty, dream logic most clearly during their film's big action/chase set pieces, like Oak and Holt's climactic final showdown. You can also also see their attention to detail in the way that they studiously avoid cliches, like their refusal to give us a full, psychologically comprehensible breakdown of Oak's character. She's a little mysterious throughout, even though her actions, and concerns, are always fairly well-grounded.

Geoghegan and Hendrix have all the right ideas, and usually in the right proportions. "Mohawk" consequently has the same political urgency as Wes Craven's now-classic, but rough-around-the-edges early films, like "Last House on the Left" and "The Hills Have Eyes." I have no idea if this film will enjoy the same status as Craven's masterful provocations, nor do I expect it to. But I'm so grateful that "Mohawk," a movie that I wanted to love, is as small and energizing as it is. 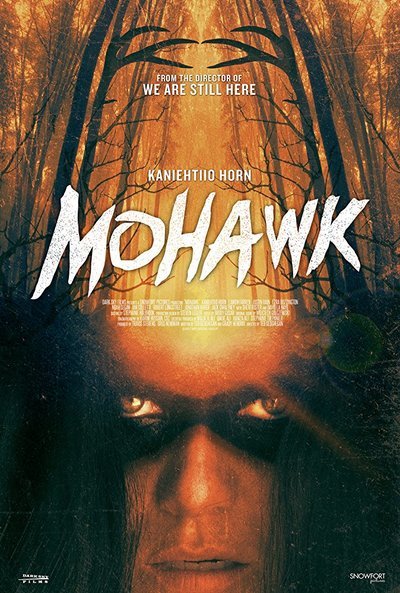