In Gerardo Naranjo’s 2012 drama, “Miss Bala,” an aspiring beauty queen is caught in the crosshairs of a cartel strike. She’s kidnapped, raped and forced to work for the gang in the hopes of finding her missing friend. It’s a bleak story, a loose reflection of how cartel violence has ruined the lives of countless innocent bystanders. It was released at a time before cartel violence would reach its fever pitch, or at least, before many Americans knew about its escalation. Seven years later, the Mexican film now has a Hollywood remake, one that adds new elements to the story but is less coherent in its message.

“Twilight” director Catherine Hardwicke’s new version of “Miss Bala” follows Gloria (Gina Rodriguez), a makeup artist who was born in Mexico but moved to the States when she was young. Her hometown connections to Tijuana have grown thin over the years, but she continues to visit her close friend Suzu (Cristina Rodlo) and her son. On the night the two young women go out to a club, a shooting erupts, separating the two friends in the chaos. In trying to find out what happens to Suzu, Gloria falls deeper into the cartel world that has ensnared them both.

Changing the main character of “Miss Bala” from Mexican to Mexican American adds a different kind of complexity to the story, like Gloria’s guilt over her inability to fit in with other Mexicans and when others mock her for being a pocha (a Mexican or someone of Mexican descent who lives in the States and loses their ability to speak Spanish). In Tijuana, the members of the cartel exploit her American passport to do a job for them. And when the American Drug Enforcement Agency arrives, they’re not much help and they assume she’s inherently guilty by cultural association. Gloria becomes a woman without a country or a people, like a drug war version of the phrase “Ni de aqui, ni de alla” or “Neither from here or there.”

There are plenty of plot twists in Gareth Dunnet-Alcocer’s action-packed script to keep things lively, but some new additions to the story may amplify complicated feelings about the film’s subject. There’s no separating either version of “Miss Bala” from its relationship to cartels and violence. Since I have long tired of only seeing Latinos as gun-toting drug runners, I had avoided the original until recently. While I want to cheer for all the Latino talent involved in making this big studio movie, taking home big studio-sized checks and, hopefully, getting opportunities most of us would have never thought possible in the entertainment industry unless your name is Sofia Vergara or Jennifer Lopez, I’m still very conflicted that the only way we could get this spotlight is by playing the worst versions of our communities.

Soon after her capture, Gloria meets face-to-face with the cartel’s leader, Lino (Ismael Cruz Córdova), who reveals he was once an undocumented immigrant in Bakersfield, CA., before he was deported and pushed into a life of crime. Lino is the movie’s thorniest character, a sensitive bad guy who warms up to Gloria to gain her trust. His manipulation and control are subtly romanticized, much like how movies have romanticized power-hungry gangsters in the past. Lino is also the best embodiment of how complicated representation can be for Mexicans or Mexican Americans. As a Mexican who lived in America like Gloria, his character absolves the movie from portraying all Mexicans as bad or corrupt. However, his character also plays into current anti-Latino rhetoric that undocumented immigrants are dangerous or capable of heinous crimes.

In a change from her upbeat persona from “Jane the Virgin,” Rodriguez dives into her character’s many emotions and action sequences with ease. She leans into the movie’s twists, moving quickly though Gloria’s shock and onto her quick thinking to escape. Although the plot to enter the main character into the beauty pageant loses much of its poignancy in the 2019 movie, the remake holds onto the visual motif for a dramatic final showdown in which Rodriguez, in a ballgown, reclaims her independence with bullets.

Although the new “Miss Bala” gives its lead character the agency to fight back and outsmart her captors, the film overdoses on its own message of pop feminist empowerment, changing its lead from a survivor to a superhero, as if the only way to liberate herself was by using the same violence that kept her captive. It’s a move that sanitizes the original’s direct and harrowing story, while casually leaving the door open for what looks like a sequel. 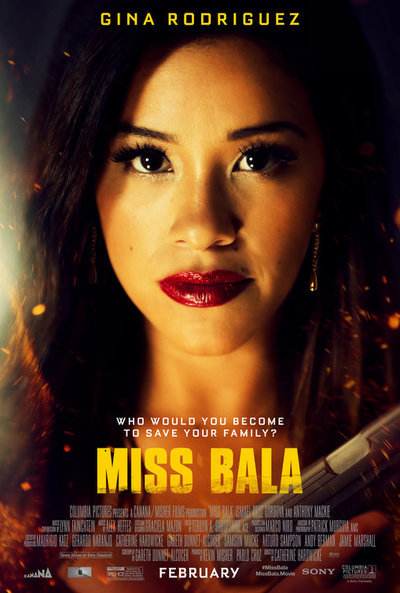