Fabio Guaglione & Fabio Resinaro’s “Mine” is practically a one-man show. There are tech elements that are essential to its success, but this film lives and dies on what Armie Hammer does at its center. He’s not only in every scene, he’s often the only person in the scene, playing a guy trapped in the middle of nowhere and reflecting on exactly how he got there. Hammer is riding a wave of success and acclaim, appearing in “The Birth of a Nation” and “Nocturnal Animals” last year and about to blow people away in “Call Me By Your Name” later this year. It’s easy to see him becoming one of his generation’s most interesting actors. And when that happens people will come back to this relatively small thriller and appreciate how he’s had the skills for some time now. Every time that “Mine” threatens to come apart under its own pretensions (which is relatively often), Hammer does something subtle and believable to ground it.

Mike (Hammer) is a sniper; Tommy (Tom Cullen) is his spotter. They are on a ridge, on assignment in a dusty land, when it looks like their target is in sight. A convoy comes over the horizon, met by another group of people in the sand. Over the radio, Mike hears that their target is in the last car, but the color is wrong. Mike hesitates. What if this is the wrong guy? And the situation is complicated even further when Mike and Tommy realize that the group below them is gathered for a wedding. Is Mike really going to shoot the father of the bride at a ceremony when he’s not even positive it’s the right guy? He hesitates long enough that the situation goes haywire, and Mike and Tommy are forced to walk hours to the nearest village. Then Tommy steps on a land mine. And so does Mike.

Much like “Buried” or “The Shallows” trapped their protagonist in a specific place, Mike literally can’t move his left foot or risk going boom. He calls in the disastrous situation they’re in and is told that someone can come rescue him … in 72 hours. He considers something daring called “The Shoeman Maneuver” that involves basically digging a trench next to you and then trying to fall in it in time to minimize damage. If you’re lucky, you’ll only lose a leg. He has to deal with sandstorms, running out of water, and animals in the middle of the night. And then he starts going crazy, flashing back to his abusive father and a wife he left behind.

“Mine” is unapologetically philosophical. We all have land mines in our life that we’re not willing to step off, dude. It’s a film in which a character literally says, “Every day can be your last step.” Oh, really? Thanks. In remembered moments of his past that got him here, we literally hear a mine sound, as if Mike has stepped on them symbolically before. We get it. “Mine” is the kind of movie in which you will even likely say, out loud, “We get it,” at least once. It hammers its themes and messages, and then hammers them again and again and again.

While it’s clear that the filmmakers were somewhat scared of the simplicity of their concept in the way they weigh it down with flashbacks and messaging, the real tragedy is that Hammer could have pulled off a real one-man show. He does some of the hardest work of his career here, conveying both the trauma of his situation and the baggage that Mike brought with him to the desert. We believe that Mike is likely going to die—eaten by animals, blown up by a mine, or simply dying of thirst. It’s odd to say that Hammer gives a physical performance given he’s stuck in one place, but he remarkably sells his predicament as a real, dangerous one. The film works because of him (with a shout-out to excellent editing by Filippo Mauro Boni, Guaglione, and Matteo Santi, too). It’s a really good performance from an actor I suspect will give several great ones over the course of his career. 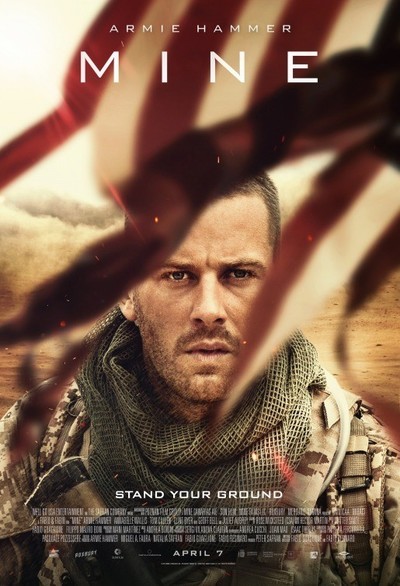