Like all great films that nudge the world toward being a slightly more compassionate place, the creation of “Menashe” is an act of empathy. Co-writer/director Joshua Z. Weinstein’s film achieves this initially by putting a soulful gaze on a world we rarely see in American film, the Hasidic community of New York City, using non-actors who speak entirely in Yiddish. But the emotional focus is what makes the film so incredibly special. Here is a film dedicated to recognizing our most common obstacles, its quiet storytelling largely accompanied by those feelings at the bottom of anyone’s gut: guilt, shame, defeat. "Menashe" is a gorgeous ode to everyone's inner screw-up.

Those reactions come from observing the life of Menashe (Menashe Lustig), our hero and our tragedy. His wife has recently died, his son Rieven (Ruben Niborski) has been placed into the care of his brother Eizik (Yoel Weisshaus), and he keeps screwing up at his job at a local food store. Menashe is a direct opposite of what his rabbi, The Ruv (Meyer Schwartz) says that the Talmud indicates any good man should have: “A good wife, a good home, nice dishes.” Stubborn yet prideful, he is desperate to prove to his peers that he is fit to take care of his son, despite being a widower, something that they essentially hold against him. But he keeps screwing up, with some problems the cause of his own foolhardy nature or nearsightedness, and others are less so. He slams back and forth between two Yiddish terms: a schlemiel (inept) and a schlimazel (unlucky).

Everyone is going through their own stuff, as we should always try to remember, and “Menashe” looks deep into that ideology of compassion. Menashe looks a bit insane compared to his peers, not just in that he doesn’t wear the traditional hat and coat like other men, but that he’s a black sheep in every responsibility, as a father, a worker, as a person in his community. As the story moves, Menashe tries to take control of his roles, getting custody of his son for a week, but he also doesn’t think straight with his actions, for whatever reason. In one gently heartbreaking moment, he ruins a shipment of gefilte fish, while trying to squeeze in time with his son at work, because he forgot to shut the van’s back doors. Throughout moments like this, the film asks: How much of this is rotten luck? Or, even larger: How truly helpless are we, when faced with things that make our days worse?

Weinstein captures Menashe’s turmoil with utmost sincerity and stunning control. Adding to its neorealist flavor, intimate cinematography places us in Menashe's cramped apartment, (where he can only feed his son soda and cake for breakfast) or in the middle of his tense meetings with The Ruv. And every now and then, a moment of meditation is offered by a gorgeous melodic motif (from a score credited to Aaron Martin and Daq Rosenqvist), inhaling and exhaling with just a few notes. Rarely has ordinary clumsiness been treated with such heart or beauty.

But the profound effect of “Menashe” comes in large part from its title performer, Menashe Lustig. It's the type of non-actor performance that directors dream about when they risk their narrative on someone with no previous IMDb credits, where natural line-reading blends with the sharing of someone's fascinating, true perspective. You see him, you recognize him, you forget you are watching someone pretend. The way that Weinstein works with Lustig is vital too, carefully doling out emotional moments and not pushing for reactions after something disheartening happens to his character. With its performance and direction in particular, “Menashe” is sublimely delicate.

Like “Moonlight” before it, “Menashe” makes an incredible case that the specific is universal, and that stories shouldn't compromise perspective for a wide audience to get it. With this film, the focus is incredibly specific on different Hasidic traditions and communal expectations, but the low-key emotions that fill each scene require no explanation. Weinstein also intentionally withholds details about the various ceremonies or gestures experienced in Menashe’s world, but it only opens his world up naturally. You can fill in the specifics later by looking it up, or asking a friend.

“Menashe” is tenderly paced and expressed, though it is also tense in its own way. And yet while the movie is full of a characters’ stress, it is not dominated by that feeling like so many other movies that show people squirming through the worst days of their lives. Instead, “Menashe” transcends its anxieties and becomes wholly comforting, like the closest that art can come to offering a big hug. What an extraordinary feeling to watch a movie that essentially wraps its arms around you and says, It’s okay, buddy. We’ve all been there. 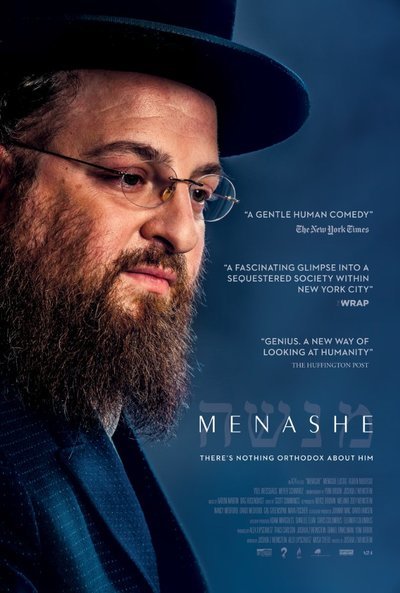