A group of women in creepy, featureless white masks shout “Jezebel! Slut! Sinner! Satan’s Child! Delilah!” as they chase a young woman walking home on a dark night. Once they catch up with her, they kick her and they beat her until she admits she deserves punishment. Finally they ask her to “promise to accept Jesus into her heart and become a devoted, virtuous woman, submissive to the Lord,” filming her confession with a cellphone. This visceral scene of ethical tension opens Anita Rocha da Silveira’s mesmerizing sophomore film “Medusa.”

Inspired by the rise of radical evangelical Christian factions and women-on-women violence in her native Brazil, director da Silveira crafts a film that oscillates between satire and out-and-out horror as she analyzes the world of these so-called pious, yet actually brutal women. As pointed in its criticism of the Christian Right as Beth de Araujo’s 2022 SXSW breakout “Soft & Quiet,” what separates da Silveira’s film is its interest in the structures that birth these kinds of women, not just the brutality of their actions.

“Medusa” follows two lifelong friends, Mari (Mariana Oliveira) and Michele (Lara Tremouroux), whose church vocal group, Michele and the Treasures of the Lord, sing political propaganda and love songs to the Lord in the style of '60s-style girl groups while awash in purple-pink neon. They also moonlight as vigilantes who roam the streets at night beating up women they deem sinful. Meanwhile the organized army run by the young men of the church, Watchmen of Sion, seem to spend all their time doing choreographed exercises taken from Claire Denis’ “Beau Travail.”

These women have been raised in this church sponsored purity culture, where outward beauty supposedly correlates with inward virtue. Mari slicks back her naturally curly hair and stifles any hint of passion behind a passive smile, while Michele hides her relationship traumas behind a perfect face of make-up. From this hyper-focused pursuit of purity and perfection, the pink-clad Michele runs a religious YouTube channel from her bubble gum pink bedroom aimed at grooming virtuous women through tutorials and life hack tips. Did you know a selfie from below is Hell’s Gaze and above tries to mimic God’s gaze? Always snap a pic straight on! Mari works at a creepy plastic surgery center where all the patients, and even the doctor, look like they fell out of Terry Gilliam’s “Brazil.”

The vigilante group traces its origins to the myth of a woman named Melissa, who was the most promiscuous girl ever to live in their town—more sinful than Lot’s daughters. Although she was beautiful, she was a homewrecker. One day a woman dressed like an angel wearing a white mask lit her face on fire and it is from this cleansing fire the young women find their mission. The Christian church has a long history of using fire to purify the bodies of the living to prepare their souls for the hereafter. Here da Silveira finds the horrific echoes of colonialism, from its forced conversion of indigenous peoples to its burning of their land, painfully reverberating ever still.

When one of these purifying attacks goes awry, leaving Mari visibly scarred, she loses her plastic surgery job and decides to search for Melissa, whom she believes is still alive in a coma ward. While on this search she meets a new set of people, whose point of view and way of living cause her to reevaluate everything she’s held to be true. This of course causes a rift with Michele. It’s in the way da Silveira handles this rift that we see the strength of her empathy. If women have been conditioned by the patriarchy to control each other, it’s only women who can also save each other.

As the two begin to find freedom within themselves and the strength to push back against the abusive men who run the church, other women in the vocal group step into the power they have relinquished. After observing Melissa defy her boyfriends, one such woman whispers to Mair: “Michele, Mariana, Melissa ... I once read that girls’ names that start with the letter ‘M’ are names of malicious women ... Mary Magdalene ... Messalina ... Monsters.”

Da Silveira’s film seeks to dismantle this very concept of the monstrous woman, and especially how women themselves uphold it. In Greek mythology, when Medusa broke her vow of celibacy, the goddess Athena turned her hair to snakes and made her beautiful face so hideous that all those who gazed on it turned to stone. Medusa isn’t a villain, she’s a victim. She dared embrace her sexual freedom and was condemned for it.

Mari and Michele may not come to see the power inherent in the freedom women like Medusa sought, or even their own culpability in perpetuating their own subjugation, but they at least see the cage within which they’ve been raised. They allow themselves to finally feel its suffocating effects. This realization comes with one one of the best cinematic uses of a primal scream as these two women, and all those around them, embrace the catharsis of seeking true deliverance.

Although its many cinematic influences—from Dario Argento’s “Suspiria” to David Lynch’s “Twin Peaks: Fire Walk With Me”—are apparent, da Silveira wields them to tell a story distinctly her own. Eliciting powerful performances from her two leads and striking visuals from cinematographer João Atala, “Medusa” casts its gaze at the hypocritical and violent world of purity culture with unflinching honesty that will leave the audience spellbound long after the credits roll. 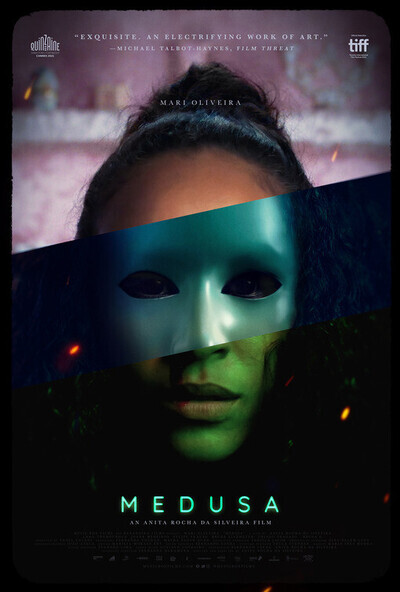