Even in the event that you don’t have any interest in Jerry Lewis as a dramatic actor (which as it happens would be an unfortunate event indeed), the opening credits of “Max Rose” promise some excitement to the well-rounded cinephile and/or connoisseur of American popular culture. A movie with an ensemble cast that includes Dean Stockwell, Claire Bloom, Rance Howard, Lee Weaver, Ileanna Douglas, and Mort Sahl (who hasn’t acted in a theatrical feature since 1984, for heaven’s sake) has to have something on the ball. And “Max Rose,” written and directed by longtime indie producer Daniel Noah, does have something on the ball. Its ensemble cast.

Okay, that’s not all, but that’s almost all. Lewis plays the title role, and as the opening credits roll out, there follow a familiar array of shots of the lead actor in his youth, his face Photoshopped into simulations of the life of his character, stuff you’ve seen in the pages of any Lewis biography. The only way this isn’t distracting is if you have no prior interest in Lewis. Once we get to the actor himself, he is in a bereft, almost catatonic state. His wife of 65 years has just died, and he sits, wearing a red sweater and white shirt, in a grey, spacious living room, one that fills with buttery sunshine light when the movie flashes back to a time when his wife Eva (Claire Bloom) was present. He announces to Eva that Kurt Vonnegut is on “Charlie Rose” this evening, and Eva responds that Vonnegut is a “horse’s ass.” Oh, old couple banter. Vonnegut himself died in 2007, so one may be distractedly wondering when in the hell this movie was even made. (2013, as it happens.) Lewis goes through the paces of playing an old, sad man, and briskly conveys the thousand natural shocks that flesh is heir to. Things pick up in his conversations with his granddaughter Annie, played in alert, appealing fashion by Kelly Bishé. The question of where old Max is to go and what he’s to do is interrupted, in Max’s mind at least, by a discovery. Going through Eva’s things, he comes across a makeup compact that has an amorous-seeming inscription at its base. It’s signed “Ben” and dated 1959. This rattles Max to the extent that at Eva’s funeral he delivers a stony eulogy saying that his life with Eva was a lie, and concluding “I’m a failure. I failed my wife. I failed my family. I failed myself.” This is the most powerful scene in the film.

Contemplating the locket, a viewer with any feeling for poor old Max might want to grab his shoulder and say, “It’s probably nothing. Forget about it.” But the movie’s got another hour to go, and go it does, into Max’s minor breakdown and move into an old-age home, into confrontations with Max’s son Christopher (Kevin Pollak), into Max’s detective work that finally uncovers the Ben of the compact, which of course leads to the confrontation with Ben. And it’s during these final scenes that the movie, which had been skating on the thin ice of ensemble-cast goodwill much of the time, finally and definitively sinks.

I mentioned up top that if you had no interest in Lewis as a dramatic actor it was kind of your loss, but it’s also true that it’s tough to find a really good movie in which the comedic icon plays it entirely straight. The greatest, of course, is Martin Scorsese’s coruscating “The King of Comedy.” But as conventional and stiff as “Max Rose” itself is, Lewis’ performance in it is full of virtues: he’s committed, disciplined, and entirely credible. As are all the other above-mentioned cast members. They’re good enough that they sometimes make the commonplace material seem better, and wiser, than it is; this holds particularly true in the scenes between Lewis and Pollak. But in the end it’s the mediocrity of the scenario that resonates more. 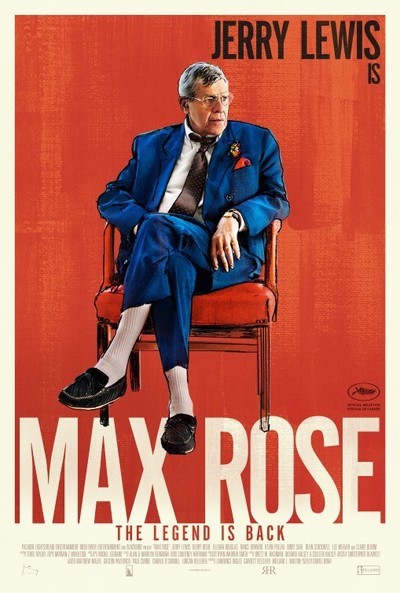