The virtuosic American director David Fincher gets credited with quite a bit, but one quality he’s not credited enough for is playfulness. That’s understandable in a sense, given the themes and subjects of his movies. Serial killers, obsessive entrepreneurs, master manipulators of reality itself: these and their metaphysics are weighty things.

Yet, as to manipulation, so deeply and mordantly treated in Fincher’s last feature film, 2014’s “Gone Girl”—that is in a sense a form of play. And so too we can see Fincher’s mastery of film language as a form of play as well. I think the most productive way to look at “Mank,” a new film about Hollywood in the 1930s and ‘40s, and about the screenwriter of a particularly famous and iconic work, is to understand it as Fincher’s most playful work.

It’s right there in the presentation. Fincher and his crew (cinematographer Erik Messerschmidt, editor Kirk Baxter, sound supervisor Ren Klyce, production designer Donald Graham Burt, and many more) are working with state-of-the-art cinematic tools, largely in the digital domain. And with these tools, Fincher constricts himself to a black-and-white image, and even puts little circles in the corners of frames to create the illusion of old-time reel changes. And for all that, this frame through which we see his version of the 1930s is a wide one rather than a nearly square one, hewing to the form first presented by CinemaScope, the wide-gauge celluloid format not introduced to audiences until 1953, the year this film’s title subject died at age 55. Additionally, the black and white here is not a sharp Gregg Toland black-and-white, nor a deep-dark Stanley Cortez black-and-white. It’s not at all a nitrate black-and-white. It’s a creamy, dreamy black-and-white, at times nearly Lynchian.

So clearly “Mank,” which credits Fincher’s journalist/essayist father Jack Fincher as the screenwriter (although one of its producers, Eric Roth, who wrote Fincher’s 2008 “The Curious Story of Benjamin Button,” had a hand in scripting, if I read this movie’s attendant interviews correctly) is not trying to recreate the feel of a movie that might have been made during the heyday, such as it was, of the man who is co-credited with writing the screenplay for Orson Welles’ 1941 Hollywood groundbreaker “Citizen Kane.”

So what is it doing?

I’ll be honest with you: after two viewings I’m not yet entirely sure.

I do know that with Gary Oldman in the title role and a superb supporting cast, Fincher has crafted an entertainment that’s provocative, pointed, ruthlessly entertaining, and in some respects, particularly near the end, a little bit infuriating.

Whatever it is, “Mank” is not, as several have proclaimed, a “love letter” to old Hollywood, or to the movies themselves, and I can’t fathom why anyone would think so. The movie capital of the United States depicted here is one where almost nobody is happy in their work, or proud of it for that matter. Except maybe mogul Louis B. Mayer, whose pleasure derives from his venality: Speaking of the individual moviegoer, Mayer (played by a very animated Arliss Howard, who is made up to look not just like Mayer, but like Mayer as a wizened homunculus) proclaims: “What he bought still belongs to the man who sold it. That’s the real magic of the movies and don’t let anybody tell you different,” He says this to Herman and younger brother Joseph (Tom Pelphrey) as they walk with the mogul to a presentation where Mayer announces salary rollbacks to the group of employees he calls “family.”

But “Mank” is not entirely a poison pen letter, either. Fincher’s usual mode of cinematic discourse is on commendable display in the shot depicting writer and Mankiewicz crony Charles Lederer’s introduction to Hollywood: a closeup of the telegram, in Lederer’s hand, containing Mankiewicz’s invitation to Tinseltown (“Millions to be made here and your only competition is idiots,” which is what Mankiewicz actually wrote to Ben Hecht, who unlike Mank practically did make millions). Then the hand goes down, and a painted backdrop on rollers travels from right to left on the lot’s street; the camera moves up to show a big poster reproduction for a current Paramount production, painted on a soundstage wall. Here, the breathless rush of a hive of commerce and maybe art is evoked with commendable cinematic dispatch and imagination.

As for its title character, the writer Herman J. Mankiewicz, a New York journalist and wit who sought fortune, and found dissolution, in Hollywood—until the prospect of authoring, or co-authoring, what some might call The Great American Screenplay offered a shot at redemption—“Mank” does not chronicle his fall from grace. Right off the bat he’s a lost soul.

Whether with or without honor in Hollywood, he is no prophet. In an early scene of drunken besottedness, he proclaims to his wife, whom he’s nicknamed “Poor Sara,” that “The Wizard of Oz” is going to “sink” MGM. Presiding over a writer’s room full of other Algonquin Round Table types, Mankiewicz places extravagant bets on coin flips while poor brother Joe tries to work on dialogue with a stenographer who seems to have come straight from a side gig at a burlesque show. Summoned to pitch a story to studio executive David O. Selznick and director Josef Von Sternberg, Mank and his merry men troll him with an improvised “Frankenstein” variant.

Mankiewicz, the man and writer, recollects this, and much more, as he lies bedridden at a remote ranch house, dictating what would become “Kane” to a soulful Englishwoman (Lily Collins) who’s got a husband in the war. She, a German housekeeper, and then-Mercury-Theater-overseer John Houseman (Sam Troughton) are the writer’s keepers during his process, and part of Houseman’s mission is to keep the alcoholic scribe dry. To this end, we learn that Orson Welles has gifted Mankiewicz with a private stock of what looks to be whisky but is actually Seconal, to be administered at the end of a day’s work. This movie is manifestly a work of fact-extrapolated fiction, that can’t be emphasized enough. But while the then-24-year-old Welles is referred to as a “Wunderkind” throughout, the idea that his expertise extended to pharmacopeia is a particularly ostentatious stretch in this film of stretches.

In his labors, Herman also recalls a peculiar tangle of relationships. One with Mayer, another with the media magnate William Randolph Hearst (Charles Dance, in an energetic sketch of magisterial rot) and his mistress Marion Davies (played by Amanda Seyfried, the only actor in the picture who could be said to extend some affection to an Old Hollywood type), a fine film comedienne who Hearst wanted to transform into a dramatic diva. He entertains these powerful folk, and forms a bond with Davies that leans toward intimacy, and never quite achieves it. He also remembers how Mayer and Hearst conspired to squash the 1934 gubernatorial campaign of Upton Sinclair, the inspired muckraking author whose socialist ideals disgusted, and frightened, Hollywood capitalists. Toggling between these remnants of the past and Mankiewicz’s creative efforts—which eventually are speeded to an inspired completion via a smuggled box of real booze, and include a famous bit in “Kane” that is an outstanding highlight of what Mank will recognize as his best work—the movie is at its most engrossing and credible. Its tendrils suggest themes from “Chinatown” and “Shampoo,” and also have slight echoes of Wim Wenders’ “Hammett”—a story of a detective writer working on a case of his own.

Mankiewicz’s isolation (underscored potently by, among other things, a poignant music score by Fincher regulars Atticus Ross and Trent Reznor) gives Fincher the opportunity, in the movie’s last third, to concoct discrete narrative modules in which Mankiewicz is visited by various personages who entreat him to abandon his folly. Hearst is still a powerful man, and can ruin him. But Mankiewicz clearly doesn’t believe he can be ruined any further than he already is. And now, in fact he wants to be known for this work.

Which leads to his final confrontation with Welles. For as long as “Mank” holds the great filmmaker at arm’s length, it’s on solid ground. But the movie doesn’t cover itself in glory when Welles comes center stage to balk at Mankiewicz’s request for credit. It is true that, in his initial contract with Mercury, Welles’ lawyer included a “for hire” clause stipulating that the writer would receive no credit at all. The real-life negotiations that earned the writer the credit we see in the titles for “Citizen Kane” are sufficiently dry that they would not make good “drama.” So here we are given a violent Welles reaction.

The problem isn’t with actor Tom Burke, who does a better than fair approximation of Welles in that era. The problem is the petty material with which he has to work. Certainly there are sufficient real-life examples of Welles waxing indignant and/or truculent to have provided the filmmakers with good models; but what they come up with here sorely lacks. (As do the rationales of the characters working for Welles. At one point fussy Houseman, played extra fussily by Troughton, says of his boss, “Don’t be fooled, he’s a showman, busker, reveling in sleight of hand.” Come on. This is like the bit on “SCTV” with John Candy doing Welles on a “Merv Griffin Show” parody saying that in showbiz you need something to fall back on—“fortunately I have magic.”)

And because of the richness of “Kane” itself, turning over the argumentation of this particular scenario about a part of its making (the movie proper ends before the first scene of Welles’ movie is shot, after all) reveals some curiosities. If you’re a man whose idealism and sense of social justice has been trampled by dark forces ruled by a ruthless media tycoon, and you contrive to get a form of payback by writing a movie about that tycoon, wouldn’t it stand to reason that you include the relevant precipitating incident in that movie? Charles Foster Kane is never shown steamrolling a socialist’s gubernatorial campaign; rather, it shows him losing his own bid, on what we can infer was a progressive platform, because of his own personal indulgences and some attendant political blackmail. And Kane refuses to accept any attendant humiliation stemming from this course of events because he can afford to. Some pieces of this movie’s puzzle aren’t an entirely comfortable fit.

Nevertheless, when the movie swings, it brings you with it. A walk and talk between Herman and Hearst at their introduction to each other happens while Hearst is traveling on a gigantic camera dolly, overseeing a Davies picture. The staging, shooting and editing here represent Fincher at his most inspired, creating an undercurrent of exhilaration even as we are aware that we’re witnessing crummy people doing crummy things.

While watching “Mank,” I was reminded of an essay the critic and filmmaker Kent Jones wrote for Film Comment in 2016, called “The Marginalization of Cinema.” Specifically, its opening: “About a year ago, a director I know invited me to watch a movie on one of the old Hollywood lots. As we were strolling to the screening room, we passed a little gathering of elegant business-casual types seated at makeshift outdoor tables, casually listening to one of their ilk delivering a casual talk. And just as we walked by, we caught the following remark: ‘We have a little saying around here: “F*ck the director.”’ Cue a soft sound of quietly knowing laughter from the casual audience. My friend was momentarily taken aback but finally nonplussed. It was more of the usual. Sort of.”

That story is reflective of the same-as-it-ever-was Hollywood ecosystem depicted in “Mank,” only here it’s more of a chain. The bosses do unto the director, and the director does unto, well, the writer. Again: Some “love letter.”

This review was originally published on November 6th and is being republished for the film's Netflix premiere. 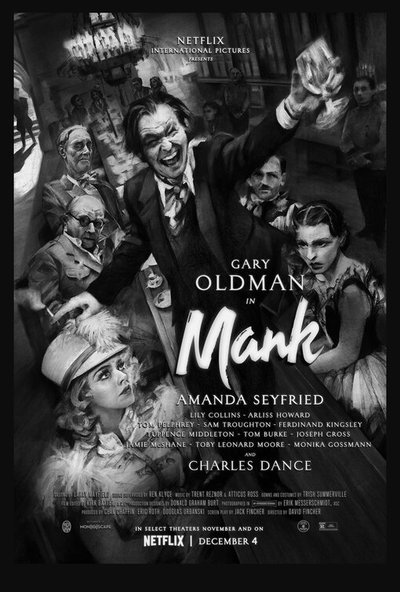 Arliss Howard as Louis B. Mayer