“Manhattan Night” is adapted from a novel by Colin Harrison named “Manhattan Nocturne.” If you ever needed a starker example of what currently separates the worlds of book publishing and moviemaking today, there you go: in books, you can still get away with using the word “Nocturne” in your title.

The movie is a kind of neo-noir that begins pretty unpromisingly, with lead actor Adrien Brody looking hangdog and unshaven as he traverses New York City’s mean, grey streets (the movie has a lot of authentic Manhattan locations, and is pretty resourceful in faking it when its exteriors aren’t the real deal). All that’s fine, but then there’s the voiceover: “I saw the new born and the dead,” Brody’s character, named Porter Wren, intones. Describing his work as a newspaper journalist, he continues, “I’m always running to the place where the bad thing just happened.” Aside from being ineffectually portentous in and of itself, the doominess promises, in a sense, what the movie fails to deliver.

It’s pretty frustrating to watch a close-but-no-cigar movie like this. Brody’s Wren is a family man in a job that he’s afraid in going to be extinct any minute. (And no, this movie isn’t any more perceptive or surprising in its treatment of The Death Of Print And Its Attendant Integrity than pretty much any other movie has been.) At a gala celebrating the acquisition of his paper by a predatory, porcine media mogul named Hobbs (oh yeah—the names in this movie…) he nevertheless catches the eye of a very comely young lady named Caroline (Yvonne Strahovski), who, it happens, wants him to look into the grisly and mysterious death of her husband, tyro filmmaker Simon Crowley. Played by Campbell Scott, who sports dyed hair and the general mien of a guy who sleeps in a disused McDonald’s fryer, Simon, seen in voluminous flashback, is a real piece of work, an emotional vampire obsessed with capturing “truth” via video. Tossing around phrases like “My dark heart to your dark heart,” he captivated the not-necessarily-his-type Caroline. And Caroline in turn tempts Porter from dedicated surgeon spouse Lisa (Jennifer Beals). If all this isn’t enough, Hobbs (played with the usual vicious glee by Stephen Berkoff) wants something from Caroline, and is aggressively going through Porter to get it.

This is not a bad scenario, all things considered: a kind of cross between “The Long Goodbye” and “The Big Clock” with any number of curveballs added in case you think you know where it’s going in the event you’re familiar with its antecedents. And the movie shows a more-than-cursory concern with the inner workings of its cast of desperate characters. But adapting writer/director Brian DeCubellis can never convincingly nail a tone of either dread or erotic obsession. When Brody’s character surreptitiously enters Caroline’s apartment, and comes upon the sight of Strahovski in the shower, the cutaway to Brody in slack-jaw hangdog position is pretty much the most wrong kind of Kuleshov Effect. It’s for this reason, too, that all of the ostensibly Big Reveals for the main characters end up stranded in “Is That All There Is?” land. DeCubellis also commits a few unforced errors, e.g., hiring the actor who played a senile dad confined to a nursing home in “Inside Llewyn Davis” to here play, yes, a senile dad confined to a nursing home. (The actor is Stan Carp, and he does a fine job in both films, but, you know, come on.) Quite a few of the cranky colleagues in the screening I went to also complained that certain plot mechanics didn’t quite work, but they really just weren’t paying close enough attention. They worked fine. 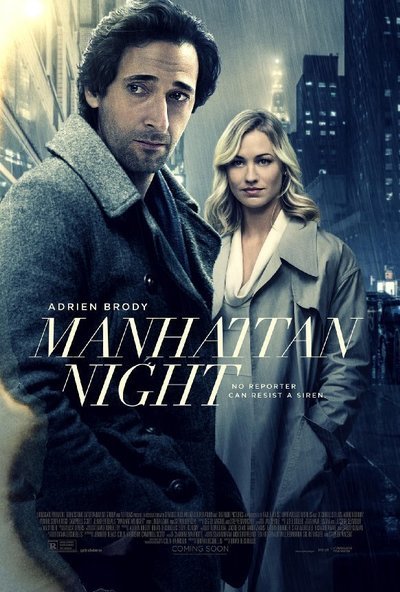