When Manu (Grégoire Ludig) and Jean-Gab (David Marsais) discover a housefly the size of a small footstool in the trunk of a car they just stole, they're surprised, but not for the reasons one might expect. They bluster around in dismay, saying, "Why is this in the back of the car? This screws up our plans! What do we do now?" What they don't do is ask the most obvious question: "How on earth did a fly get this big?" Manu and Jean-Gab take at face value the most extraordinary things, and get discombobulated by the everyday. They are not the brightest bulbs is the kindest way to put it. "Mandibles," the latest from French filmmaker Quentin Dupieux, takes as its premise an absurd situation and then treats it like a normal bump in the road. Manu and Jean-Gab's baffled yet incurious reaction to the fly is the first absurdity, and more and more follow in a farcical and ridiculous avalanche.

The reason the dim-bulb duo stole the car is because Manu—first seen sleeping on the beach, the tide rolling in around him—gets a job. Can he carry a briefcase to a mysterious man and hand it over, without ever looking inside? Manu thinks he can. But first he has to steal a car. And then he has to loop in his friend Jean-Gab. Jean-Gab has nothing else going on so he's down for the adventure. The two clearly go way back, as evidenced by their constant catch-phrase-gesture—making heavy metal bull horns with their fingers, interlocking hands, and saying in unison, "Toro!" "Toro" works no matter the situation. It's how they connect, commiserate, celebrate. When they feel a repetitive vibration from the car trunk, they pull over and discover the enormous fly, staring up at them with gigantic red eyeballs. Normal responses do not apply. Manu and Jean-Gab get the bright idea to ditch their original mission, and instead train the fly to be their own personal bank-robbing drone.

What works so well in "Mandibles" is how it's set up as a basic heist movie, using very familiar elements, so familiar they're almost tired cliches, before going completely off the rails into random demented territory. Dupieux likes to start with an outrageous situation, and then follow it wherever it takes him, anchoring it all in the familiar. Consider his film "Rubber" (2010) featuring a tire as a murderous sentient entity, or "Deerskin" (2019), where a man (Jean Dujardin) becomes unhealthily obsessed with his jacket made of deer skin. Dupieux doesn't develop these ideas so much as present them, reveling in the various possible outcomes of such a weird event. He seems to start with a question: "What would happen if ... ?" His films can seem like one-trick ponies, repeating the same joke over and over, but there's something refreshing and also humorous about Dupieux's outlook, a mish-mash of Dada and Eugène Ionesco and Franz Kafka, with some Salvador Dalí thrown in; he creates a space out of the banal and everyday where unexplainable things happen, where inanimate objects take on intelligence and agency, where two dumbbells see a giant fly and their first thought is: "She would make a perfect drone. We'll be rich!"

If there is a correct choice to be made, Manu and Jean-Gab have never heard of it. Their training sessions with the fly (whom they christen Dominique) are interrupted by a cascade of easily avoidable disasters. Eventually they are picked up by a carload of people, one of whom, Cécile (India Hair), thinks Manu is a guy she knew (and slept with) in high school. Manu goes along with this, leading to farcical almost slapstick moments where he is unable to follow her down memory lane. Cécile: "'Member when we fooled around in high school? You came in two seconds." Manu, who does not remember, because it wasn't him, says, "You too." Cécile's group of friends look on the raggedy interlopers with suspicion. "Mandibles" lingers here for a long while, milking the jokes (to some success) and allowing the mysterious briefcase mission to disappear in the rear view mirror.

The person who is most suspicious of the two newcomers is Agnès (Adèle Exarchopoulos), a young woman who—due to a skiing accident—can no longer speak at normal decibel levels. Instead, she shouts everything, even when she's not angry. The joke of her character doesn't completely land, although Exarchopoulos' attempt is admirable. Such a broad-strokes role, played completely straight, would require a Cloris Leachman, a Vicki Lawrence, a Carol Burnett, a gifted lunatic actress in other words, to pull it off.

The animatronic fly is "a thing of beauty and a joy for ever," to quote John Keats in a completely inappropriate context. Dominique is an amazing creation, with very little CGI trickery. She doesn't seem to have been patched into the film later. She really seems to be there in the room, or in the car, her un-readable face looking on at the shenanigans of the two "Dumb and Dumber" goofballs who have captured her, shouting "Toro" every other minute. Sometimes the film switches to her point of view, a dizzying kaleidoscope of incomprehensible human behavior. She is horrible to look at and the stringy hairs coming out of her head are horrifying in their own unique way—but a funny thing happens as "Mandibles" moves along. Dominique becomes real, becomes lovable, even. Her eyes seem to really see, really take things on. Watch how she cocks her head in alarm when a knock comes at the door. She is thinking and feeling things. The hairs coming out of her head start to look adorable. Dominique is the calm reasonable center of the craziness.

This may be the most absurd part of Dupieux's vision. Who likes flies? What person is happy when flies show up? Fly swatters were invented for a reason. "Mandibles" loves Dominique, and we love her too. Toro! 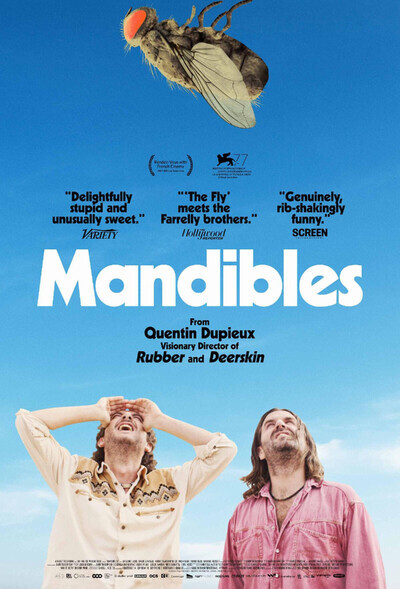