The intricacies of what does and does not get pushed on Netflix fascinates me. Some of their original movies get notable promotion, highlighted on the front page and premiered at film festivals. Other stuff is nearly impossible to find, such as today’s premiere of “Malevolent,” a vicious little slice of horror starring Florence Pugh, who was so fantastic in “Lady Macbeth,” and is in a number of exciting upcoming projects, including new films from David Mackenzie, Greta Gerwig and Ari Aster. Now, “Malevolent” is far from perfect—it kind of sabotages a solid first hour with a clunky, tone-changing climax more likely to leave you queasy than scared—but it’s still better than A) a lot of theatrically-released horror films and B) a lot of Netflix original films. And yet I had to dig to find it this morning—it wasn’t even listed under New Releases. Genre fans may want to dig too.

“Malevolent” starts with a great deal of promise and effective filmmaking, anchored by an excellent performance by the clearly-a-future-star Pugh. The set-up is a familiar one (and an odd cousin of another movie I reviewed this week, “A Crooked Somebody” if you think about it). Angela (Pugh) and Jackson (Ben Lloyd-Hughes) are con artists of the highest caliber. They run a fake ghostbusting ring in Scotland, going into homes that their clients believe are haunted and “exorcising” them of their spirits. They have an elaborate set-up, including prerecorded sounds and scripted speeches designed to send the undead on their way. Angela is a bit conflicted about the scam, but Jackson owes some very bad men some money, and so he’s desperate for a big job. They think they’ve found one when they get a call from Mrs. Green (an excellent Celia Imrie), the owner of an old foster home. She just wants the dead kids to be quiet. Moral of the story: Never go to a haunted foster home.

Of course, the story of the non-believer shown the hard way that they shouldn’t mess around with forces of evil is as old as the horror genre itself, but there’s a surprising amount of effective filmmaking in the first hour of “Malevolent.” It’s mostly due to Pugh’s grounded, in-the-moment performance that sells both her fear and understanding that she’s seeing something supernatural, but there are also some interesting themes tossed around about family secrets and even messing around with other cultures. Angela and Jackson are Americans, and when the latter toasts “To the Scots and their haunted land,” one gets the impression that these are cocky Americans messing with a history and culture they don’t care to understand. Most of all, the set-up works because of Pugh’s commitment. We believe her, and director Olaf de Fleur plays with her perspective, often grounding the camera on his star as she realizes something’s not right—such as in a fantastic scene in which a ghost is foregrounded but we stay on Pugh’s face, as we see her realize something is in the room and convey the “should I look” fear on Angela’s face. It’s a nice beat that other performers couldn’t sell.

However, even in that first hour, there are some cheap filmmaking tricks that can be frustrating. It’s a not a film overly reliant on jump scares (although there are definitely a few) but there are too many scenes of characters moving slowly as something like a leaky tea kettle whistle gets amped up on the soundtrack. (Cut that out, filmmakers.) And then “Malevolent” jumps the rails. Without spoiling anything, it goes from an effective ghost story into something closer to Eli Roth or “The Texas Chain Saw Massacre,” and the tonal jump to something unexpectedly vicious is jarring—and probably the reason Netflix had no idea how to sell this flick, and so buried it.

The horror genre is overflowing with stories of people who messed with the devil and got the horns. But there’s something more going on in “Malevolent” than most other straight-to-video horror flicks that play with the same themes. It’s not going to be anyone’s favorite new horror film this holiday season, but it’s a solid enough start to the month when temperatures drop and it becomes cooler to tell ghost stories. If you can find it. 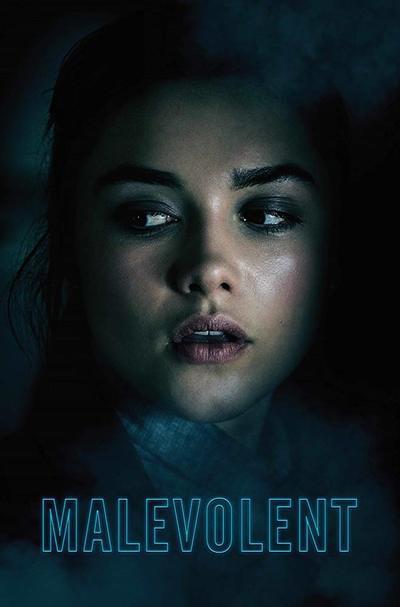