“Lady Macbeth” has the refined, pleasing trappings of a tasteful period piece with the vicious, beating heart of a brutal psychological thriller. You can’t stop watching its beauty, even as you long to look away from its cruelty.

Much of the film’s allure comes from its central, powerhouse performance from Florence Pugh. In only her second feature, the 21-year-old actress reveals the kind of technical precision and command of the screen you’d see in a veteran. And in only his first feature, British theater director William Oldroyd is wise enough to keep the film’s tone and surroundings minimal to give Pugh maximum room to shine.

It’s a sinister light that radiates from her – although, not at first. Part of what’s so fascinating about “Lady Macbeth,” and its script from Alice Birch, is the way in which it manages to maintain Pugh’s character’s status as a strangely sympathetic figure, even as she commits increasingly horrific acts. She does it all in the name of liberation, but that freedom ultimately comes at a hefty price.

“Lady Macbeth” is based not on the iconic Shakespearean character but on Nikolai Leskov’s Russian novella “Lady Macbeth of the Mtsensk,” which tackled the ways in which the female spirit could be stifled in the 19th century, particularly in rural communities. When we first see Pugh’s Katherine, it’s on her wedding day in 1865; just from this opening scene, Oldroyd efficiently sets the tone for the film’s prevailing austerity.

This should, theoretically, be a joyous occasion. But at just 17, Katherine is being forced into a marriage with a man more than twice her age: the emotionally withholding Alexander (Paul Hilton), whose wealthy father, Boris (Christopher Fairbank), has purchased Katherine along with a plot of land. Katherine’s sole purpose is to provide an heir, but it’s clear from the couple’s cold, sexless wedding night that’s going to be a challenge.

“I’m thick-skinned,” she proclaims in the darkness of their bedroom, defiantly. And she’s going to need that.

She slogs around the joyless house, day after day, with her ever-present maid, Anna (Naomi Ackie), serving as the main witness to her boredom and frustration. (As showy as Pugh’s performance is externally, Ackie does just as much mostly wordlessly with just her eyes and her presence, especially as the situation grows more extreme.) But when both of the oppressive men in her life are forced to leave the family’s remote estate on business, Katherine takes the opportunity to begin exploring the outside world – which prompts an awakening inside her.

Cinematographer Ari Wegner gives the wild, sprawling grounds a grimy, tactile quality that’s bleakly beautiful. It matches the sound design, which is spare but intense. Such an approach is fitting given the fascinating contradictions of our heroine. Pugh has a bracing naturalism within this chilly, restrained setting, making her a force of nature unto herself.

Nowhere is that more evident than in the passionate, ill-advised affair Katherine hurtles headlong into with the estate’s groomsman, Sebastian (Cosmo Jarvis). A strong and handsome man of mixed race, Sebastian shows Katherine zero deference, which naturally drives her wild. (And yes, I realize this all sounds like the stuff of cheesy romance novels, but rest assured that “Lady Macbeth” is deadly serious.)

The less you know about where the film goes from here, though, the better. Suffice it to say that the mushrooms that worked their magic in the patriarchal pressure cooker of Sofia Coppola’s “The Beguiled” are just as effective here, across the Atlantic, during the same time period. Both are horror movies brilliantly disguised as genteel dramas, with prim women resorting to drastic measures to assert their identities.

As fascinatingly flawed as Katherine is, though, the source of her treachery remains a mystery. We don’t really know who she is before her dreaded wedding day, which perhaps lessens the enormity of her arc. Similarly, Sebastian is sexy and powerful but there’s not much to him beyond the external manifestation of his masculinity. He is a concept, a catalyst.

Still, the fate Katherine shares with him remains devastating. Hers is a damned spot that nothing could rub out. 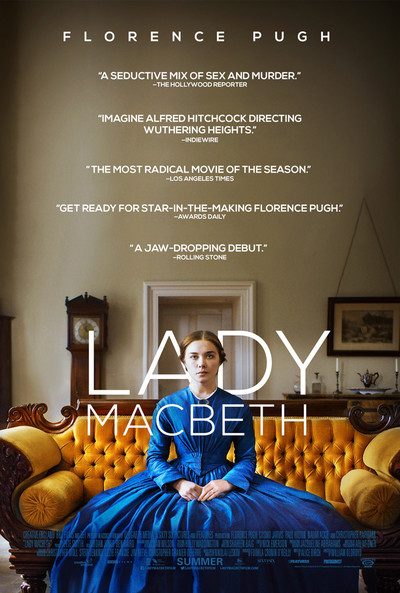 Rated R for some disturbing violence, strong sexuality/nudity, and language.

Writer (based on Lady Macbeth of Mtensk)