Trevor White’s “A Crooked Somebody” is a surprisingly effective drama, an interesting little story of a man who has led the life of a charlatan, and how the decisions he’s made in the past, and some really bad ones he makes here, lead him to ruin. It’s a character piece that reminded me of one of my favorite writer/directors of the ‘90s, Hal Hartley, in the way it captures a protagonist so deeply flawed that you’re left to question for much of the running time whether or not you want to see him talk his way out of his latest debacle or not. It’s filled with really solid character actors, many of whom are known for their excellent work on television, and all of whom know how to help a film like this one seamlessly flow from beat to beat. It’s not a groundbreaking piece of work, and I wish it embraced its indie, Hartley-esque roughness a bit more instead of trying to be too polished in the final act, but it’s always nice when a movie with little to no buzz sneaks up on you like this one did for me.

Rich Sommer knows how to play fast talkers, having played a memorable one as Harry Crane on “Mad Men” for eight years. He stars in “A Crooked Somebody” as, well, the title character—the title also riffs on something his father, played by Ed Harris, says: “Better to be an honest nobody than a crooked somebody.” Well, Michael Vaughn is as crooked as they come. He’s a traveling psychic, one of those guys who goes from town to town, holding ceremonies at which he claims to talk to the dead loved ones of people in the audience. When it’s not going well, his partner (Joanne Froggatt of “Downton Abbey”) pretends to be one of those in need of communication, mostly to impress the other attendees. At one such meeting, someone impressed is a fellow named Nathan (Clifton Collins Jr.), who kidnaps Michael later that night, ordering him to help him communicate with someone he knows on the other side …someone Nathan killed.

To spoil more than that would take away a lot of the charm of “A Crooked Somebody,” but suffice it to say that Michael makes an increasing number of remarkably bad decisions with regards to his kidnapper. "A Crooked Somebody" is one of those movies that's not unlike watching a man build a house of cards. You just know it's going to fall over eventually.

Nathan is a fragile and dangerous man, but he’s also a believer, and Michael has spent his whole life taking advantage of believers. The narrative draws in a few other familiar faces, including Amanda Crew of “Silicon Valley,” Michael Mosley of “Seven Seconds,” the great Paul Ben-Victor of about a thousand things, and Ed Harris’ real life wife Amy Madigan as Michael’s mother. It’s a really solid cast, and everyone in it delivers, especially Sommer and Collins, two actors with what sometimes feel like completely opposite acting styles. Sommer excels at buttoned-up anxiety while Collins has always felt like a very instinctual, in-the-moment actor. They’re perfectly cast here.

The cast is excellent but there are some production choices that hold back White’s film, especially as it builds to a climax. There’s a misguided over-use of score in the final act, something that often happens in movies that are trying to build tension, but it’s distracting here. There are also some underdeveloped threads in the relationship between Michael and his father, a religious man, and the disingenuous way in which Michael views what he does as not too different than what his father does. The film teaches him it’s very different, but it would have been nice to see Harris & Madigan used more; same with Mosley & Ben-Victor, two actors I was very excited to see show up and then aren’t given much to do.

In the end, “A Crooked Somebody” is a movie about a man who has made a living predicting how people would respond to what he says. It could be a general question or an emotionally charged comment that he knows will produce the right response that makes them a believer. There’s an excellent scene in which Michael goes so seamlessly into his routine in a motel lobby with the owner of the property that it’s almost impressive. But he learns the hard way that people can be unpredictable. The grieving can harbor resentment; the violent can want to change their ways; the loyal can betray you. We watch Michael slide into mistake after mistake because his ego blinds him to the needs of others. And then White and writer Andrew Zilch completely nail the landing, dropping the credits after that rare thing, a perfect final line. 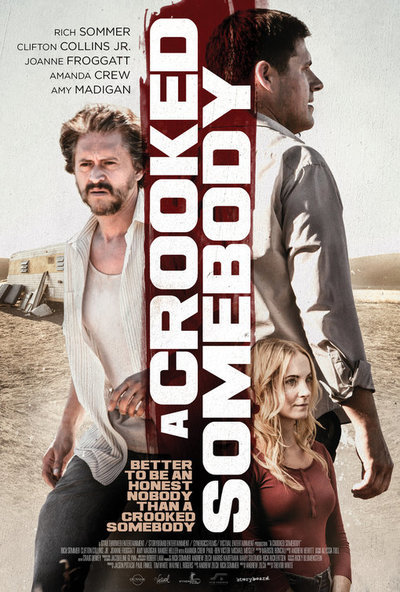