Angelina Jolie is one of the last movie stars, although in recent years, Hollywood has seemed mostly unable to fashion projects that would demonstrate why. Her work as Maleficent, the bad queen from Disney's "Sleeping Beauty," is a reminder of how electrifying and fun she can be.

Jolie first played the part in 2014's "Maleficent," a live-action (but thoroughly CGI'd) fantasy drama that reimagined the story from the character's point-of-view, ultimately treating her as more of a volatile antihero enacting grievances upon the land than a straight-up villain who existed to do mean things and be vanquished. Her razor-sharp prosthetic cheekbones, elegant horns, and velvety wings seem to spring organically from the sorts of roles Jolie played before she took a sharp left turn into more neutered or saintly roles in the mid-aughts—particularly the title character in HBO's "Gia," and the Jack Nicholson-like rebel she played in the mental hospital drama "Girl, Interrupted" (winning an Oscar in the process). Her Maleficent voice channels old movie stars (Joan Crawford especially), and she's never more delightful than when the character is trying to keep her witchiness under wraps and failing.

The sequel "Maleficent: Mistress of Evil" would seem like a perfect complement to the first film, because it's built around a clash between Jolie and another great '80s and '90s star, Michelle Pfeiffer. But having set up this potentially juicy conflict, and having detailed a scenario that would put it front-and-center while deepening Maleficent's relationship with her human goddaughter Aurora (Elle Fanning), the movie repeatedly fails to get out of its own way. The result is a disappointment that's more crushing than an outright bad movie would be. The original, despite its flaws, had moments of primal power and deep understanding of what drives people, qualities that are mostly lacking here.

Pfeiffer plays Queen Ingrith, the mother of Prince Phillip (Harris Dickinson), a human royal from a nearby kingdom who wants to marry Aurora. Aurora and Phillip see their impending union as a "bridge" joining the human kingdom and the magical creatures who live on the moors under the protection of Aurora and Maleficent (a bit of a "Shrek"-y touch here).

Unfortunately for both of them, and for everybody else, Ingrith is a genocidal hatemonger—a bloodthirsty bigot, really. The animosity between the two sides is larded with vague references to racist and genocidal regimes throughout history, as well as the current border crisis in the United States, Ingrith is furious when her husband, King John (Robert Lindsay), asks her to cease her nonstop invective and be on her best behavior during an engagement dinner at their castle.

The long scene that follows is a high point for all of the actors, with animosities bubbling up even when everyone involved is trying to make peace. All of Ingrith's choices are calculated to inflame Maleficent, from serving squab (which requires one winged creature to eat another) to furnishing the table with utensils made of iron (according to the mythology established here, faeries are allergic to iron). But the script doesn't seem willing or able to escalate tension gradually, so that we can savor the characters' psychology and the actors' mostly sharp performances and feel as if this Disney sequel is trying to get at something deep and true rather than just take money from people who liked the first movie.

The dinner becomes an instant disaster that leads to a state of open warfare. Maleficent gets back in touch with the faeries who used to live openly all over the world until human hatred and violence drove them literally underground, where they live in a series of caverns and tunnels. The scenes between Maleficent and her lost fellow winged creatures are sincerely staged by filmmaker Joachim Rønning, who co-directed "Pirates of the Caribbean: Dead Men Tell No Tales," particularly Maleficent's prolonged entrance to the kingdom though a series of spiraling tunnels; but once they're all gathered together, discussing grievances and plans, the film starts to feel like one of those big-budget cable or streaming fantasies that has more money than imagination. At least Chiwetel Ejiofor and Ed Skrein make a strong impression as, respectively, a sensible and cautious character and a rebel hothead.

The stage is set for a clash of armies, with the winged creatures trying to figure out how to penetrate a perimeter guarded by huge crossbows loaded with iron bolts. The final war feels more like a Marvel CGI mayhem-fest or a battle episode of "Game of Thrones" than anything in the traditional Disney animated canon, and the lead-up expends prodigious amounts of time on court intrigue (including the question of whether a major character was poisoned, and by whom) that could have been more usefully spent on continuing to develop these characters.

Worse, the story seems incapable of dealing with the issues that it makes a point of raising. Ingrith's racism (species-ism?) marks her as a villain, one seemingly driven mad with rage, but we know from real life that even if we hate people who hold these views, they're still members of a family, and that makes the dynamics in the household complicated and painful for everybody else. The movie gives little thought to what the war does to Phillip, whose own mother is the architect of the clash, and only slightly more thought to Aurora, who seems a bit quick to accept that the surrogate mother who raised and protected her must be taken out of the picture for the greater good, or so that the wedding can go forward. (It's clear that Ingrith only wants the wedding to proceed so that she can have an excuse to, in the words of Kurtz in "Heart of Darkness," "Exterminate all the brutes.") The climactic settling of scores is particularly cowardly in this respect: Ingrith all but vanishes from the movie, saving the filmmakers the trouble of dealing with anything more complex than "bad lady who did bad things is not a threat to the nice people anymore."

What went wrong? At some point maybe we'll get the full story, but this certainly looks like a case where a hit property was retooled in hopes that it could appeal to a wider demographic (i.e. boys who sometimes get antsy when a story concentrates too much on marriage, love, family and all that stuff). The screenplay is credited to "Beauty and the Beast" writer Linda Woolverton and the team of Micha Fitzerman-Blue and Noah Harpster, and the placement implies that the latter rewrote the former.

But whatever the ratio of good ideas to bad, and regardless of where each bit came from, the result is a cascade of mostly unremarkable live-action fantasy imagery, a jumble of textures and colors and cliched camera movements (like the opening "helicopter shot" flying over the realm, which is exactly how every other movie like this begins). The character designs are lackluster, too: the humanoid animals, the big-eyed "cute" characters seemingly modeled on Hayao Miyazki's woodland creatures, and the borderline-creepy uncanny valley residents who are kinda-human-ish, all lack the spark of personality that Disney's old-school animators could have produced with pen and ink. (Imelda Staunton, Lesley Manville and Juno Temple, who play three good faeries who function a bit like the mice in "Cinderella," somehow seem even more rubbery and toylike than in the first film.)

Worst of all, the movie fails to give Jolie the star vehicle she richly deserves, limiting her screen time in favor of new characters that aren't as interesting, and increasingly conveying her most important relationship, with Aurora, in throwaway dialogue and bits of visual shorthand. The relationship between a fearsome and misunderstood mother with her daughter during the run-up to her wedding should've been the heart of the picture, not all this sub-Tolkien scheming and military strategizing. There are a few striking moments, such as Phillip's first appearance, which is framed through the makeshift iris of Aurora holding up her crown, and a climactic exchange of looks between Aurora and her mother. But it all feels rushed-through and improperly considered, like a fairy tale told to a child by a grownup who's tired and bored and just wants to go to bed. 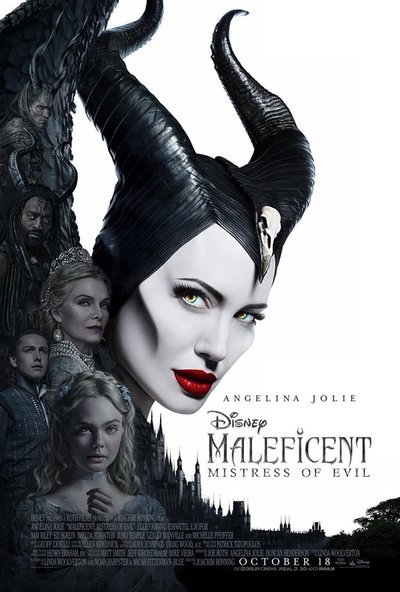