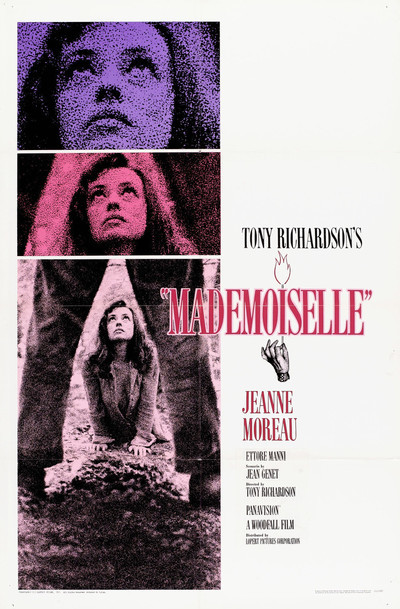 Then there is a great scene where she meets the Italian lumberjack in the woods. He has a pet snake. They shake hands, and the snake crawls down his arm and up hers. For a moment there, while the snake is in midpassage, you could turn the screen on edge and have the trademark of the American Medical Assn.

One day she goes out into the woods and is seduced by the lumberjack. The seduction scene lasts from about 4 p.m. until noon the next day. Miss Moreau and the lumberjack run through the fields and the forest and around the lake, and about midnight it starts to rain. Then it gets muddy. They slosh through the mud, carrying on their carefree lovers' dance. Slosh, slosh, slosh, I hear the lovers dancing.

The town is a very peculiar town. It is a French town in which the Italians speak in English subtitles, and when the French speak, they speak in French to each other, but in English when they are speaking to the camera. Miss Moreau speaks in English and teaches her classes in English, even though she is French. The kids don't learn so fast. Probably confused by the Italian subtitles.

I am not, of course, being very fair to "Mademoiselle," but it is not the kind of movie that encourages mercy. It is murky, disjointed and unbearably tedious. The script by Jean Genet reads like something out of Evergreen Review by way of French pornography.

Tony Richardson has never made a movie anything like this before. His best films ("Look Back in Anger," "A Taste of Honey," "Loneliness of the Long Distance Runner" and "Tom Jones") were all characterized by a fast-paced editing style and a refreshing disregard for pretension. But with "The Loved One," Richardson came down with a bad case of trying too hard, and in "Mademoiselle" there is no restraint at all.

Still, Miss Moreau is as flawless in her lousy roles as her good ones.

Jeanne Moreau and the Art of Refusal