Ever since I read Paul Gallico's The Zoo Gang as a teenager, about a bunch of thieves stealing jewels and priceless artworks off the wealthy in Nice, I've had a thing for heist stories. What's not to like about glittering baubles being lifted right off the pretty necks of the wealthy, especially if the thief looks like Cary Grant? Films like “Rififi" or "Le Cercle Rouge" are classics in the heist genre, so detailed they're practically how-to manuals. Art heists take place in the rarified world of art collectors and the thieves who target them (rarely for reasons of art appreciation), not to mention the cunning forgers who get in on the action (like Patricia Highsmith's Tom Ripley and his grifter cohorts). How on earth does one steal the Mona Lisa, as happened in 1911? How does one just walk off with an Edvard Munch? It seems impossible, and that's the fun of it. "Lying and Stealing," directed by Matt Aselton (who co-wrote the script with Adam Nagata) is a mostly satisfying entry in the art heist genre.

Theo James, from the "Divergent" series, plays Ivan, son of an art thief (now dead), working to pay off the outstanding debt his father owes to a violent slimy criminal named Dmitri (Fred Melamed). Ivan went to art school, mainly for preparation to enter the "family business," and is sent out on jobs by Dmitri, mansions to be targeted, specific art works to be lifted for various shadowy high-rolling buyers. These are elaborate heists, involving cunning on Ivan's part: scoping out the joint, creating cover stories, using disguises, bringing special equipment. Ivan is a success at what he does. He always has a tuxedo at the ready to attend glittering charity functions, surreptitiously eyeing the art on the walls.  However, he is eager to be released from Dmitri's clutches, to put the whole life of crime behind him. Finally he gets the chance he's been waiting for to wipe the slate clean by pulling off one "last big score".

Taking place in and around Los Angeles, "Lying and Stealing" has a sleazy and yet somehow muted glow, the colors cool and blue-tinged, nothing warm or inviting, Los Angeles here is a nocturnal place of all-night pool halls, Edward-Hopper-style diners, empty roads in the Valley and dark alleyways. But there are also the houses perching high on Mulholland Drive, and palatial getaways in Laguna Beach. The Santa Anita racetrack looms as a mostly-empty place, perfect for drop-offs and illicit meetings. The characters in the film are either extremely wealthy or part of the grifter underworld.

At Ivan's first gig, the most high-end poetry reading of perhaps all time, he meets Marguerite (Emily Ratajkowski), a pretty blonde in a tight blue dress. They banter back and forth, for no discernible reason. He's a gentleman with her (which will end up being important, although not stated outright). He gets her a glass of wine, all as his eyes scan the room for the art he's looking for. Of course there's more to Marguerite than meets the eye. There's also more to Ivan. His bipolar brother (Ebon Moss-Brachrach) was kicked out of a halfway house and now shacks up in Ivan's apartment, popping pills and not doing much of anything. Bipolar brother comes in handy a bit later, as well as fills in the backstory for Ivan, but he's mostly extraneous. An FBI agent (Isiah Whitlock Jr.), on Ivan's trail fits right in to the overall vibe: everyone in the movie is working some kind of angle. Nobody is just a functionary, there just to serve the plot. Everyone, to some degree, is looking to escape the confines of their present lives. It's a smart script.

We see Ivan pull off a number of thefts, each one more perilous than the last. The riskiest heist happens in a house with no security at all. It’s a nail-biter. Alone among the characters, Ivan actually appreciates the objects he's ordered to steal. There’s a lot of recognizable art in the movie, a Modigliani, a Degas, a Giacometti. Among the heists are Jeff Koons' steel rabbit statue (just auctioned off in May for a staggering $91 million), a Philip Guston, and a self-portrait of a certain murderous dictator. Aselton and cinematographer Corey Walter keep the style and shots simple, and yet fluid. There’s nothing too fussy or attention-getting (save the opening shot). What’s important is intelligibility in such complex sequences involving multiple locations. We never lose our bearings, we learn the layouts of the rooms, where the artwork is, where the exits are. This lets us into how Ivan sees these spaces, and the challenges he faces.

Theo James gives an understated performance, and it’s the kind of performance more difficult than it looks. He doesn't play the part with an "attitude." He never pushes for effect or emotion. He appears to just be this guy, thinking, listening, reacting. Ratajkowski, who got her start as a model, doesn't match James in skill, but she is believable as a young woman hovering on the fringes of the movie business, prey to the more powerful and rapacious. The dynamic between Ivan and Marguerite is not what you think it will be, and there are unexpected nuances—including humor—along the way. The film could use more humor, in general, and could have had more fun with itself and its tropes. But it seems Aselton wanted to avoid a parodic or broad comedic tone (used so often in heist movies), and in that he has succeeded. "Lying and Stealing"—and the artworks it indirectly celebrates—has some real pleasures. 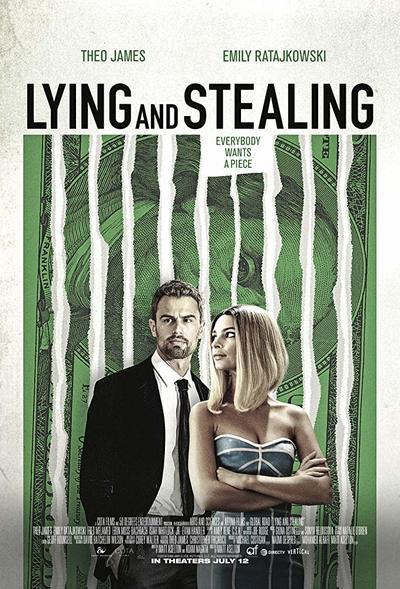