The sense of being cheated by fate is one I suspect most earthlings can relate to, especially as we grieve the loss of loved ones amidst these uncertain days. I’m still shaken by the sudden death of Lynn Shelton, a filmmaker who infused every frame of her oeuvre with a palpable, lived-in humanity. Her characters dared to break their silence over issues that would normally be deemed taboo, while challenging societal perceptions with every twist of the plot. I wish she had gotten the chance to see “Lucky Grandma,” the charming debut feature of Sasie Sealy, which presents us with a heroine unlike any we have grown accustomed to seeing earn top billing in the crime genre. She is Grandma Wong (Tsai Chin), an 80-year-old widow so enamored with smoking that her presence is first announced by the lit end of her cigarette. After spending over half of her life working tirelessly only to be left with no financial means of keeping her cherished apartment, she decides to take her fate quite literally into her own hands, all the while being spurred by the delusional certainty that she has luck on her side, just as the Blues Brothers were convinced that their spree of vehicular carnage was justified by a mission from God.

What makes this film special, first and foremost, is the performance by Chin, who has lost none of the acerbic edge she sported as Waverly’s mother in “The Joy Luck Club,” where she welcomed her daughter’s clueless fiancé with a stiff smile before uttering the withering remark, “So many spots on his face…” Her character’s defining attributes—stubbornness, fortitude, nagging bitterness—are summarized by a fortune teller in NYC’s Chinatown during the film’s opening scene, where she is informed that her luck will shift for the better on October 28th. The number eight not only proves to be Wong’s guiding star during her brief string of victories, but also serves to illustrate the circuitous structure of the plot, in which what goes around comes around with routine rapidity. There’s real satisfaction in watching the glimmers of a smile that warm Wong’s perpetually cranky face, as she finds her lucky streak raking in the dough at a casino—until it inevitably runs out. It’s not until the man seated next to her on the bus back home randomly croaks, leaving behind a bagful of money, that Wong’s unlawful adventure begins. She figures that she’s entitled to the stolen cash since its rightful owner, the Chinese mafia, hasn’t worked an honest day in their life.

It’s in sequences such as the one on the bus where the film’s broadly comical score can become a touch overbearing, needlessly punctuating the laughs rather than allowing the considerable skill of the actors to organically earn them. Yet the instincts for comedy Sealy built as a member of the sketch comedy troupe The Fifth Humour serve her well in other areas, particularly during the quietly tense moments when Wong must rely on her inherent craftiness, such as a gift for haggling, to steer her away from danger. No sooner does she start spending money than her apartment is invaded by cartoonish thugs who claim she stole from them, prompting her to purchase a discount bodyguard, Big Pong (Hsiao-Yuan Ha), from a rival gang. A former Taiwanese professional basketball player, Ha was selected by Sealy as her “Chinese Andre the Giant,” and he does channel the late wrestler’s disarmingly gentle spirit. In fact, the whole picture has a pleasingly gentle quality even as Wong finds herself in over her head time and again. The film doesn't bank on cheap gags requiring a badass granny to fire a gun. The most lethal weapon Wong brandishes is a wok, and even then, her intent is not necessarily to kill.

Editor Hye Mee Na (“Chi-Raq”) effectively conveys Wong’s mounting addiction at the roulette table by accentuating each repetitious motion, which are so difficult to halt when you’re on a roll. She and Sealy also skillfully portray the disorientation felt by Wong in a steam room, where she’s confronted by a crime boss whose formidable presence is felt even as she vanishes from our gaze. My favorite stretches of the picture are the most eccentric, such as the running gag of incessant knocking at the elderly woman’s door turning out to be false alarms, resulting in the entrance of her grandson and his friend, who proceed to begin recording a hilarious dance video as their online duo, Slavic Wong. Though the story is a relatively straightforward one, there is a deeper level of meaning that can be gleaned from how Sealy and her co-writer Angela Cheng approach the alleged elusiveness of luck. Good fortune has been bestowed upon Wong all along, and impacts her life when she least expects it, taking the form of people who may not have been her first choice for companions, yet are those best equipped to ensure her rescue. Viewers could dismiss certain dei ex machina as mere contrivances, yet there is an underlying truth to them that caused me to buy them on their own terms.

During one of her endearing conversations with Big Pong, Wong credits anise, the aromatic plant native to Southwest Asia, as the key ingredient to bring out flavor in her meal. Anise also happens to be a favorite preoccupation of Joshua Leonard’s world traveler in Lynn Shelton’s micro-budget classic, “Humpday.” Though Shelton and Sealy are entirely different filmmakers, both are deft at bringing out the flavor in genres that could’ve easily been treated as run of the mill. As a recipient of AT&T’s Untold Stories grant that boasts an all-female crew of filmmakers, “Lucky Grandma” exemplifies the potential of a more inclusive cinematic landscape, one that is guaranteed to alter the predominant Hollywood beliefs regarding what constitutes a mainstream appetite.

“Lucky Grandma” is partnering with the grassroots initiative Welcome to Chinatown to directly support Chinatown businesses following the rapid decline in revenue as a result of COVID-19 and increased xenophobia. Donations can be made here. "Lucky Grandma" is available today in virtual cinemas. 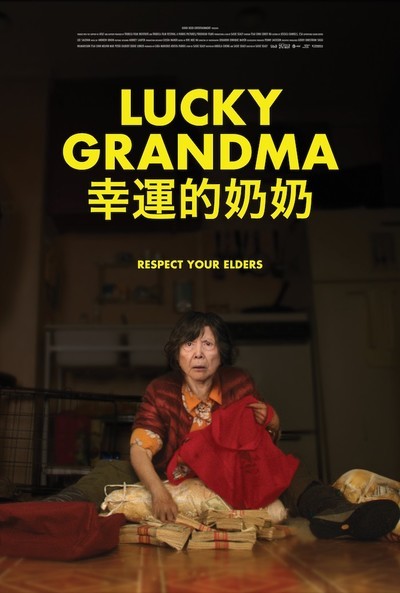