The tight little coming-of-age thriller “Low Tide” often feels like a slow-motion car crash. From very early on, we know this can only end in tragedy, and it becomes a matter of trying to figure out exactly from which direction it will come. Will it be greed, anger, or plain old stupidity that breaks up the quartet at the center of Kevin McMullin’s film? This is an old-fashioned hybrid of a thriller and a coming-of-age narrative that explodes when a fortune gets dropped into it. Think of it as an adolescent “The Treasure of the Sierra Madre” with echoes of '80s adventure classics like "The Goonies" and "Stand by Me."

Alan (Keean Johnson), Red (Alex Neustaedter), and Zmitty (Daniel Zolghadri) live day to day down the Jersey shore. Their backgrounds are left somewhat vague, but one gets the impression that blue-collar, possibly-single parents are a part of the picture. Both to alleviate boredom and so they can get some of the creature comforts life has denied them, the trio performs routine burglaries, nabbing a few things from the McMansions down the shore. In the one that opens the film, Smitty is caught on a second floor when the owners come home, and he’s forced to jump to the patio below, injuring himself pretty badly. This means that the guys will need a new lookout, which brings Alan’s brother Peter (Jaeden Martell of “Midnight Special”) into the gang. Is this the decision that will be their undoing?

Early on, McMullin sketches character details as a form of foreshadowing. There’s a great scene in which a group of preppie-looking kids pull up to near where the gang is sitting. The rich kids are showing off, playing their music loudly. Red's eyes look red with jealousy and anger. He flashes a knife, just enough so the driver can see it. Not only is Red territorial, but he’s probably a little dangerous. In the same group is a young lady named Mary (Kristine Froseth), who catches Alan’s eye. In one scene, without too much overly expository dialogue, we have easily delineated between Alan and Red – the lover and the fighter. When the boys find some literal treasure as a result of their next job, we can see where the cracks will form before they do.

“Low Tide” is filled with small decisions that work. It could have been melodramatic nonsense in the wrong hands, but McMullin has a subtle, clever touch—I particularly loved a late scene in which one of the boys is trying to shake down the others and caps his demands with a long sip on a juice box, reminding us these wannabe men are still children. He also works very well with actors, giving all four of his young men a chance to shine while also using Shea Whigham as a local cop. Neustaedter is menacing in just the right measure, Zolghadri looks right on the verge of making a bad decision at all moments, and Johnson has a warm charisma that fits the role. And then there’s Martell, who anchors the film without stealing focus from his supporting actors.

There are some minor pacing issues that hold back “Low Tide”—for a film that seems comfortable taking its time for an hour, it feels like it then rushes to the ending—but this is a confident debut that seems like a film we’ll be looking back at it in just a few years as an early work of at least one major acting talent. It gives a critic that feeling they had the first time they saw “Stand by Me,” certain that this was a young cast that we’d still know when they got old. Like that film, this is a story of friendship and youth, although one tinged with the sense that we know adulthood often comes early through tragedy. 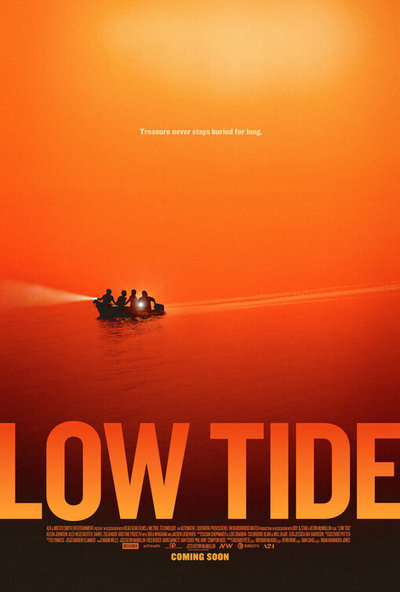 Rated R for language, some violence and teen drug use.