Jeff Nichols’ “Loving” is that rare mainstream film that provokes frustration and rage without resorting to monologues or melodrama. The two people at the center of this period drama aren’t prone to long speeches. They’re quiet, conservative, almost shy folk who ended up at the center of one of the most important Supreme Court cases of the ‘60s by virtue of falling in love, getting married and having children. Nichols’ approach is careful, reserved and deeply considerate of the human story he’s trying to tell. There’s no sense of exploitation here—if anything, he’s almost too reverential in his unwillingness to show any flaws. One can sense a director’s understandable trepidation in telling the story of two private people whose life was made very public. What’s most important to Nichols’ vision is how much trust he has in his two leads, and what they give back to him in exchange for that trust.

In 1958 Virginia, a reserved mechanic and construction worker named Richard Loving (Joel Edgerton) married his pregnant girlfriend Mildred (Ruth Negga). The two drove to Washington, D.C. to make their union official, and Richard bought an acre of land near Mildred’s family home on which he planned to build a house. They hoped that Richard’s mother would deliver their first child, and that they would live in peace in a beautiful, country setting.

In the middle of the night, all of that changed. Officers broke into their home, arresting both Richard and Mildred, stating that their marriage license was no good in Virginia and that they had violated anti-miscegenation laws that stated that mixed-race couples were a violation punishable by jail time. With the assistance of a local attorney (Bill Camp), the Lovings were released under one condition: they had to leave the state of Virginia and not return for 25 years. They had to leave their families, their land, the home that they wanted to build, and the future they had seen for themselves. As the world changed with the rise of the civil rights movement, an opportunity arose to use the Lovings' case to finally eliminate the racist laws still destroying lives in part of the country.

From the opening scenes, there’s a tactile, lived-in quality to Nichols’ filmmaking. People are always doing something with their hands—cleaning a kitchen, laying brick for a house, working on a car, etc. And there’s always something in the air, from the sound of crickets to the palpable heat of the Virginia summer. Nothing here feels like a backlot. The production design and direction is so beautifully detailed that people will take it for granted. The Loving home, the cars he works on, the jail cells in which they spend the night, etc.—every element has been carefully considered but not overly highlighted. It is a masterful example of how to use time and place in a film without drawing attention to it as so many award season movies tend to do. There’s nothing flashy here.

And that filmmaking aesthetic applies to the performances as well, two of the best acting turns you’ll see this year. Edgerton, long a fascinating actor, has never been better than he is here, especially as the weight of his situation almost looks like it’s physically pushing him down. His eyes are squinty, his posture bent from hard labor and the concern over the well-being of his wife and family. As the Loving case became more high-profile, Richard Loving had to live with constant fear and the realization that his family was arguably safer if he would just leave them. Rarely has the oppressive, every-minute-of-every-day atmosphere of the impact of racism been captured as it is here. It is like the dust in the air or the crickets at night—always there.

As phenomenal as Edgerton is here, it’s arguably Negga’s movie. It’s her eyes that I will remember, conveying so much inner monologue with just a downward glance or adoring look at her husband. There’s a scene in which Mildred gets some surprising and good news via a phone call and Nichols knows two things. One, he knows that he shouldn’t give Mildred an exclamation or a monologue. Two, he knows not to leave Negga’s face. Her eyes say so much more than dialogue possibly could in this situation. And that speaks to Nichols’ gifts as a filmmaker: one who understands how to use the tools at his disposal more than just writing expository dialogue. We see films every day in which people openly convey how they feel and what they want in ways that don’t reflect the human experience. And yet there’s more reflected about what it means to be a human being in Negga’s eyes than anything I’ve seen on film in a long time. It’s a complex, subtle, quiet performance that gains its power through its believability more than the showiness we’ve come to expect in films like this one.

“Loving” has few twists and turns. It is a rather straightforward drama, and therefore probably won’t be flashy enough for some viewers. And yet it feels urgent and current to today’s drama. Why do some films set a half-century ago feel like history lessons while others feel essential to not just the ‘60s but the ‘10s? Because there’s truth in the story of Richard and Mildred Loving. There’s something about people who just want to be allowed to start a family that is timeless and always will be. And it takes an incredibly talented trio of people in Nichols, Negga and Edgerton to convey that timelessness in a way that feels genuine. When “Loving” ends, one doesn’t feel like they spent time being manipulated by awards bait or melodrama. One appreciates a story well-told and having been allowed a brief, believable window into the lives of Richard and Mildred Loving, two people who changed the country just by falling in love.

This review was originally published during the Toronto International Film Festival on September 9, 2016. 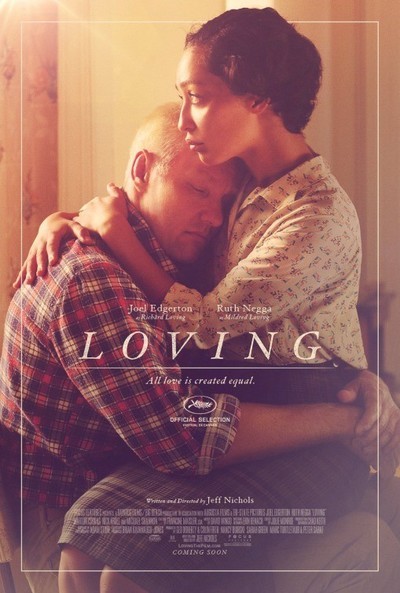 Will Dalton as Virgil