In mid-November I spent a week in St. Petersburg, Russia, as part of an international group of critics invited to participate in the first FIPRESCI Colloquium on Russian Cinema, which involved screenings of new Russian films and discussions with their makers. While Russia’s two best-known directors, Andrey Zvyagintsev and Alexander Sokurov, were not a part of the event, they were referred to often, and not always admiringly. At one point, a skeptical Russian asked me if Zvyagintsev was so esteemed in the West because his films portrayed Russia in such a negative light.

I replied that I heard the same question when I started visiting Iran in the 1990s. Some conservative Iranians felt sure directors such as Abbas Kiarostami and Mohsen Makhmalbaf won acclaim at Cannes and similar festivals because their films showed poor people and crumbling villages rather than the sleek, prosperous Tehran on view in other films. I told them that I thought these directors’ renown had a lot less to do with their subjects than with their strong, humanistic authorial voices and distinctive stylistic sophistication.

The same might be said of Zvyagintsev, who leapt onto the world stage when his first film, “The Return,” won the Golden Lion at Venice and whose last film, “Leviathan,” won the Golden Globe for Best Foreign-Language Film. Like the Iranians before him, the Russian auteur became a favorite at top-tier film festivals with movies whose seriousness of purpose and stylistic élan positioned him squarely in the modernist tradition of international art films.

Indeed, Zvyagintsev compares his new film “Loveless,” a searing drama about a couple going through a bitter divorce, with Ingmar Bergman’s “Scenes from a Marriage.” For films offering highly critical looks at modern life and its inmates, there are of course many other directors one could also reference, ranging from Michelangelo Antonioni to Michael Haneke.

Yet Antonioni and Haneke both moved from country to country and their works could be seen as dealing more with modernity or the prosperous West than with one particular country. Not so with Zvyagintsev. In a way that recalls R.W. Fassbinder’s adversarial relationship with Germany, his films are very much critiques of Russia, its soul and contemporary discontents.

For that reason, “Loveless” can be seen not just as a drama of marital dysfunction but as a fierce metaphorical indictment of the society that produced its characters. Its story is easily sketched in. The marriage of Boris (Alexey Rozin) and Zhenya (Maryana Spivak) has already collapsed when we first see them. They’re trying to sell their apartment, where she is still living with their 12-year-old son, Alyosha (Matvey Novikov). The boy is the big casualty in this battle, and no wonder. When husband and wife argue over the kid’s future, it’s clear that neither of them wants him. He reportedly spends a lot of his time crying.

In the story’s first hour, Zvyagintsev looks at the lives that Boris and Zhenya live apart from each other, each with a different work situation and new partners. Then, abruptly, Alyosha is reported missing. The story’s second hour is a procedural about the search for the boy, which involves a coordinated effort by the authorities and teams of volunteers but no reconciliation or renewed affection between his bitterly estranged parents.

The lives of Boris and Zhenya illuminate different aspects of current Russian reality. He works for a conservative tech company run by religious people who expect their employees all to be married with kids; bucking that regimen, which Zhenya acidly calls “Russian Orthodox Shariah Law,” means risking one’s job. So, Boris is nervously looking for ways to conceal his divorce, though he’s already got a new girlfriend who’s very pregnant. For her part, Zhenya has a boyfriend who’s a part of the new economic elite, so romance and social climbing are indistinguishable for her.

The way Zvyagintsev portrays this world is cold and clinical, just as its people are isolated in self-absorption. Zhenya, a cool, svelte narcissist, is almost never without her smartphone, taking selfies or checking Facebook. Hardly any movie has depicted technological solipsism with the ferocity of this film. There’s a great shot where Zhenya’s on a train and, as it pulls into the station, literally everyone waiting to get off is staring into their phones.

The film’s title couldn’t be more accurate. The couple’s marriage, according to Zhenya, was loveless from the first—at least for her. She got pregnant and was scared of having an abortion or having the kid alone, so she chose marriage. Where does this willingness for a loveless coexistence come from? Zvyagintsev suggests an answer when the couple, looking for Alyosha, visit Zhenya’s mom and find a stocky, religious battle axe who’s ready to heap abuse on both of them. This “Stalin in a skirt,” as Boris calls her, may be a deviation into uncharacteristic heavy-handedness for Zvyagintsev, but she makes a point about family failings that’s brutally clear.

One thing that’s fascinating in the story’s second half is the amount of expertise and effort that’s expended on searching for Alyosha. Zvyagintsev has suggested that it reflects a time in society when people, perhaps afraid of confronting their personal problems, look outward for causes to help them feel better about themselves.

Nor is this the only social contortion the director implicates. In the film’s final minutes, the adult characters are all looking at TV news reports about the conflict going on in the Ukraine following Russia’s annexation of Crimea. Reflecting the government’s position, the reports of course touch on collective media beliefs that stand in stark contrast to the individual critical visions of an artist like Zvyagintsev, who continues to solidify his place as one of the most important and original voices in world cinema. 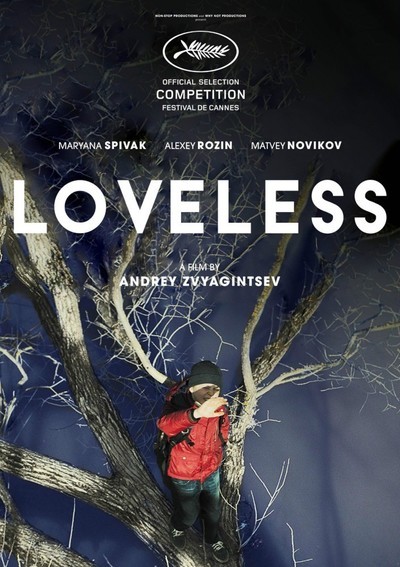