Powered by JustWatch
The number of important, enduring 1960s and early ‘70s songs that a group of studio musicians known as The Wrecking Crew brought to life is staggering.

The Mamas and the Papas’ “California Dreamin’.” Nancy Sinatra’s “These Boots Are Made for Walkin’” (and her dad’s “Strangers in the Night”). The Byrds’ “Mr. Tambourine Man.” The entire, groundbreaking Beach Boys album “Pet Sounds” and pretty much everything recorded through Phil Spector’s famous Wall of Sound, including The Righteous Brothers’ “You’ve Lost That Lovin’ Feeling.”

Director Denny Tedesco has lined up all these rock and pop tunes and many more, along with years’ worth of interviews with the unsung musicians and the far more famous acts they supported, in his documentary “The Wrecking Crew.” While a lot of filmmakers say their works are labors of love, Tedesco’s truly is in every sense of the term. His late father, Tommy Tedesco, was a hugely talented and versatile guitarist who was at the center of a core group of about 20 session musicians who became known as The Wrecking Crew for their ragged style.

The younger Tedesco’s film is an effort to honor his father—which he’s done with great affection and respect—as well as his dad’s colleagues, who were crucial at a particular place and time in musical history. They worked anonymously but seamlessly together in a variety of genres, taking notes on the page, jazzing them up and making them fly in ways the artists and songwriters themselves couldn’t have imagined.

But Tedesco also labored to get the rights to this vast library of hits, delaying the film’s release for seven years. (It premiered at the South by Southwest film festival in 2008 and is just now seeing the light of day theatrically.) The eerie upshot of that is, we get to see interviews with the late Dick Clark in all his richly polished glory prior to his 2004 stroke as well as a lively and lucid Glen Campbell, who was a Wrecking Crew guitarist before launching a solo career and who was diagnosed with Alzheimer’s disease in 2011. (In a reflection of the range these players had, other celebrity interviews include Herb Alpert, Cher and Mickey Dolenz of The Monkees.)

“The Wrecking Crew” is mostly about uplift, however—almost monotonously so. Following in the footsteps of the superior music documentaries “Standing in the Shadows of Motown” (2002), “Muscle Shoals” and “20 Feet From Stardom” (both 2013), it aims to enlighten and inspire by shining a spotlight on the folks who toiled in the background for too long. Tedesco depicts Los Angeles in the early ‘60s as a mecca for musicians—a place where work was plentiful and siren song of surf culture was irresistible.

And the players themselves have a bounty of anecdotes to share, which Tedesco mixes with a vast library of archival photos. But there are so many stories and so many people and so much music, it’s almost too much for Tedesco (who also narrates) to get his arms around. The result is brisk and entertaining but also scattered and repetitive. Only toward the end does he touch on how these folks felt about famous acts taking credit for their work time and time again. They all look back with fond recollections, which can get a little dull. And only through one player—the prolific drummer Hal Blaine—does he explore the economic downfall some of them experienced once musical tastes changed and the work dried up.

But Tedesco also unearths further evidence of Brian Wilson’s genius as members of The Wrecking Crew recall him walking them through each of their parts individually during the recording of “Pet Sounds.” It’ll make you listen to “Good Vibrations,” a song you’ve heard a million times, with fresh ears.

And he devotes a substantial amount of time to group’s main bass player, Carol Kaye. She was a rare woman in this realm—playing studio gigs all day and night at a time when women were expected to stay home and raise a family. Interviews here reveal her to be as cool and sharp as ever—and as it turns out, she’s the one who played the famous bass line on the “Mission: Impossible” television theme. Maybe she’ll get her own documentary next. 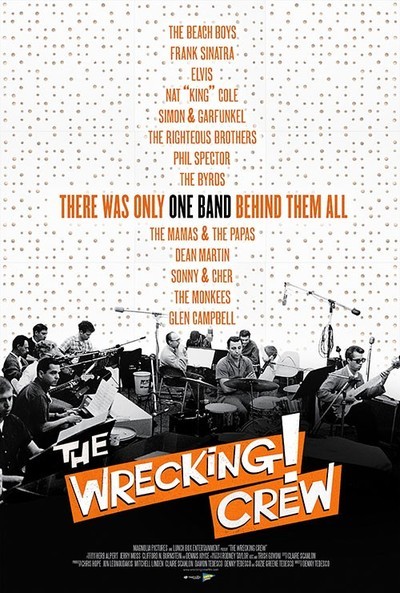 Herb Alpert as Himself

Hal Blaine as Himself

Sonny Bono as Himself

James Burton as Himself

Glen Campbell as Himself

Al Casey as Himself

Dick Clark as Himself

Sam Cooke as Himself

Sammy Davis Jr. as Himself

The Beach Boys as Themselves