“Love and Human Remains" fashions a strange alliance out of sexual politics, serial murder and the dating game. All of its characters are seriously immature and narcissistic - obsessed with their own images and orgasms - but that's the strength of the movie. Its weakness is the way it uses soap opera to veer away from its real concerns. The result is kind of a mess, but an intriguing one; it's not a very good movie, but you don't stop watching it.

The story, based on Brad Fraser's play "Unidentified Human Remains and the True Nature of Love" takes place in a Canadian city where a serial killer is stalking young women. The killer is one of the characters in the story, and if you can't figure out which one, you're not paying attention to the earrings. The story would play better, I think, without the killings or the killer; I was more interested in the relationships, as characters experiment with their sexuality, than with a plot device dragged in from David Lynch movies.

The central character is David (Thomas Gibson), a former TV actor who is now working as a waiter, and who has cultivated a sardonic, cynical pose of perpetual amusement. He lives with Candy (Ruth Marshall), who was his lover until he decided he was gay.

(Coming home at night, he opens the door and shouts, "Honey! I'm homo!") His best friend is Benita (Mia Kirshner), a prostitute specializing in a curious form of S&M (her speciality is tying people up and telling them Urban Legends like the one about the "dog" under the bed). She's psychic, by the way, which is probably a great help when trying to anticipate the needs of her clients.

One day at work, David is approached by a young busboy named Kane (Matthew Ferguson), who is fascinated by David's gay lifestyle and thinks maybe he's gay, too. It's more likely he's simply hero-worshipping the older guy, who affects a bemused superiority; poor Kane never feels bemused or superior. Meanwhile, continuing the theme of revolving lifestyles, Candy (remember her? David's roommate and former lover?) thinks she may be gay, and has an affair with Jerri (Joanne Vannicola). Or is she just getting back at David, who flaunts his promiscuity? On the stage, these character combinations probably provided a springboard for a series of revealing and comic conversations (the central set was a rumpled bed). Film, with its greater realism, has to strain to get all of these people into the same plot.

The director, Denys Arcand, specializes in large, loosely linked groups of friends (his credits include "Jesus of Montreal" and "Decline of the American Empire"). At least he doesn't hammer at absurdity the way Lynch did in "Wild at Heart." He plays every scene for the truth of the characters, and he has a strong unifying force in David, whose attempts to stay aloof and cynical are, we sense, just a way of hiding from his own pain.

If the story is eventually absurd, then, the characters aren't.

One of the most interesting is Candy, the hooker, played by Mia Kirshner, who was the table dancer in "Exotica," earlier this year.

To both roles she brings a kind of ethereal detachment, as if she's giving spiritual, not physical, solace. I also liked the painful sincerity of Kane, the busboy, whose seriousness about life - make that Life - is typical of teenagers. What I didn't like was the way Arcand and Fraser, the writer, distrusted the basic human values in their story, and laid on the serial killer as a way of disguising drama as merely melodrama. 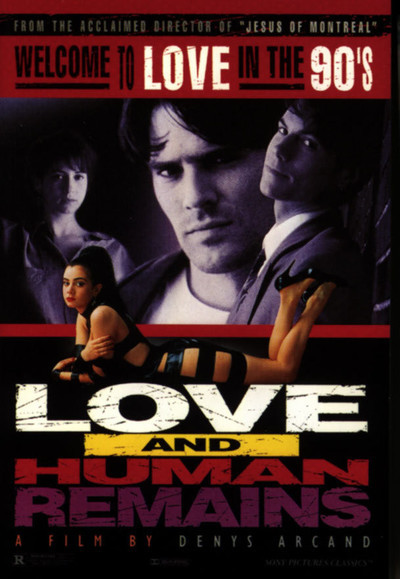