Growing up is difficult, and it can lead to feeling lost. This experience is captured in the toy story of “Lost Ollie,” a new four-part Netflix miniseries from director Peter Ramsey (“Spider-Man: Into the Spider-Verse”) and creator Shannon Tindle (“Kubo and the Two Strings”) based on the book Ollie's Odyssey by William Joyce. We’ve seen the "lost [insert object or animal here] finding their way back to their human" formula numerous times, especially in family media. However, “Lost Ollie” sets itself apart by taking a dark and sentimental approach while always wearing its heart on its sleeve.

Ollie (voiced by Jonathan Groff) wakes up in a box at a thrift store, disoriented and confused. With little to no recollection of his past outside his owner’s name, Billy (Kesler Talbot), this country-twanged stuffed bunny is determined to make it back to his kid. In the store, he meets an old jacket-wearing toy clown named Zozo (Tim Blake Nelson), whom he convinces to help him on his quest home. Along with Zozo’s right hand, a pink hard-boiled sword-wielding teddy bear named Rosy (Mary J. Blige), they embark on making it back to Billy. Meanwhile, young Billy (Kesler Talbot) searches for Ollie amid imminent family tragedy with his Momma (Gina Rodriguez) and Daddy (Jake Johnson).

Considering that the miniseries is from two people who have delivered some of the best narratives in animation during the 2010s, the two pour a hefty amount of heart and soul into making sure Ollie’s story stands out. The story format bears a nonlinear approach as both a means for Ollie to piece together his lost memories, and to achieve duality with his and Billy's sagas.

When it comes to discussing difficult subjects with resounding maturity, the tone evokes an early ‘90s energy in its fearlessness. Though it contains ample beats of whimsy, "Lost Ollie" takes surprisingly dark thematic turns while managing a deft balance throughout; it thoroughly maintains a down-to-earth atmosphere that explores the dangers of the real world. Similar to related projects like “Kubo” or “Stranger Things” (Shawn Levy executive produced both), Ollie's appeal works best in a family setting that can lead to discussions afterward.

Most of the heart of the story lies within the lead’s earnest and lovable personality. Groff’s compassionate delivery mixed with a soft country twang is as endearing as Ollie’s pure design. His determination and passion have the Paddington effect—one can’t help but love him. Surprisingly, the same goes for Billy.

If Andy was always too one-dimensional of a character to care about in those “Toy Story” movies, Billy doesn’t have the same problem. Apart from the titular lead’s journey, the narrative offers enough screen time to Billy and gives him as much agency, and the same somber tone, as with his stuffed BFF. Newcomer Kesler Talbot's passionate debut performance captures the crashing wave of emotions of fear and sadness that many face during childhood. While Billy does get to become a character for viewers to root for and sympathize with as much as his companion, the adults don’t make out as well. Jake Johnson, who previously worked with Ramsey as Peter B. Parker, barely has any lines of dialogue, too little to really land the earnest moments with Talbot.

To say that this is the closest thing to a “Toy Story” live-action adaptation is more props to Ramsey's filmmaking than you think. He captures that same magic of watching toys come to life and setting a story through their perspective. Thanks to his prior experience in animation, his eye for blocking the CG assets in spectacle set pieces is in 20/20 vision. As the story progresses, multiple moments of silent storytelling grip your emotions with how the power of animation speaks louder than words.

The VFX work provided by Industrial Light and Magic (ILM) is breathtaking. Not only are the toys’ detailed textures magical especially in close-up shots, they seamlessly integrate into the backgrounds as if they’re real. The toys were originally puppets, but were brought to life in production by ILM. The loving effort put into how realistic these toys look as they interact with their surrounding environments elevates the overall immersive experience. This series boasts some of the best visual effects work of the year to date.

“Lost Ollie” doesn’t overstay its welcome and keeps you on your toes, especially with its many twists and turns. Boasting stunning VFX work and a sweet-natured story that doesn't shy away from dark elements, it's an outstanding family miniseries that may be small in size but is mighty in heart. 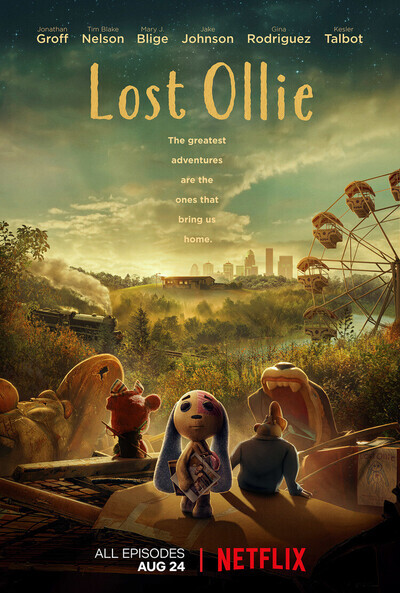