The great actor Nicolas Cage has, one could say, officially entered the phase of his career in which observers are consistently on the lookout for a “return to form.” The upcoming “Mandy,” a new film by the distinctive young director Panos Cosmatos, and starring Cage, wowed more than a few critics at Sundance. Unfortunately, that is not the 2018 Nicolas Cage movie I am reviewing right now.

“Looking Glass” opens with driver’s seat views of roads and credits in red type and a typeface that will look familiar to fans of David Lynch’s “Wild at Heart” and “Lost Highway.” “Heart,” of course, starred Cage way back in the day, when his eccentrically expressive behavioral tics seemed perfectly suited to a Lynchian world. The director of this film, Tim Hunter, was making a mark in the mid-eighties; his wonderful “River’s Edge” mixed a mode of teen realism that recalled early Jonathan Kaplan with a sense of dread that could be well cited as Lynchian. Add to that the fact that Hunter went on to be one of the better non-Lynch directors of the first iteration of the TV series “Twin Peaks.” One can’t be blamed for hoping that this combination of talents at this time might combust into something interesting.

Cage and Robin Tunney play a married couple, Ray and Maggie, who, in response to a family tragedy, are pulling a geographical. In the Arizona desert (the film was shot in the vicinity of Fredonia in that state) they buy a motel, replete with old-school neon. As they set up shop, strangely unable to scare up the fellow from whom they bought the place, Ray discovers a “Private” office whose door is chained and bolted. There’s no key on his own chain for the lock, so off to the hardware story he goes. Once inside, he makes a scintillating discovery: a ceiling-height tunnel big enough for him to crawl through, and to peep on the clients in a particular room. This revelation leads Ray to ignore the better angels of his nature, and soon enough he is practically drooling, watching lesbian S&M play even as he chastises a trucker client for claiming the prostitutes he brings to his own (the trucker’s, that is) room are his, um, daughters.

Things heat up when one of the women Ray has been peeping on turn up dead. Also dead: a pig that some malevolent pranksters have tossed into the motel’s swimming pool. The fellows who run the gas station across the street from the motel, including one standard-issue creepily-skinny guy played by Jason K. Wixom, cast a cold eye on the often abrupt and rude Ray. A cop with a needling sense of humor (Marc Blucas) starts sniffing around. This does not do wonders for Ray and Maggie’s marriage, and in one blow-out scene, all is revealed: dead child, infidelity, substance abuse. Lot of issues.

Tunney does fine with the material, which, as scripted by Jerry Rapp and Matthew Wilder, is not inordinately inspired. Cage, on the other hand, sporting a fake beard that looks like something you might craft with that Wooly Willy magnet toy, here seems to confuse underplaying with flatness. The plot’s central mystery suffers from “Body Double” syndrome in that the movie has so few characters that the villain’s reveal can only elicit a shrug. Director Hunter, whom I infer from the trades took over from originally scheduled director Dori Oskowitz, still has an eye for telling and discomforting detail, as in the visibly dirty soles of the feet of one of the murder victims as she’s being dragged from a room. But these occasional frissons can’t save “Looking Glass” from tepidity. 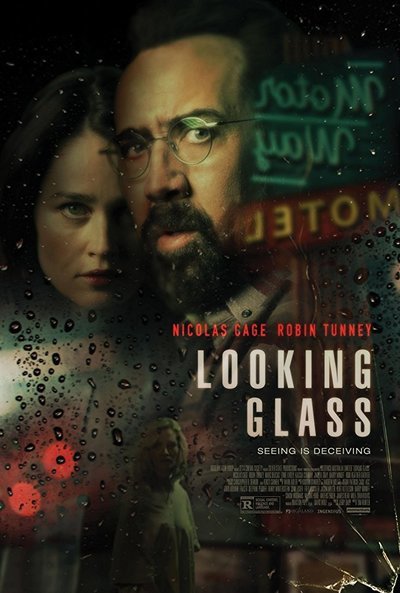