For as many valid and well-reasoned arguments exist about how nostalgia is a spiritually and culturally ossifying force, human beings and the culture industry that pursues them can’t seem to help the practice. Of all the bands that emerged during the U.K.’s punk rock years, The Clash was perhaps the most explicitly anti-nostalgia; the entire point of the songs was a here-and-now anger. This extended from the no-Elvis-no-Beatles-no-Stones new rule of its single “1977” to the 1981 simulated emergency broadcast of “This Is Radio Clash.” By pointing this out I don’t mean to suggest that The Clash’s music has no validity when heard in 2016. But it signifies very differently.

In any event, the particularity of what the band did in the late 1970s makes the nostalgic spectacle of “London Town” kind of curious. The movie, directed by Derrick Borte from a script by Matt Brown (adapting a prior project written by Sonya Gildea and Kirsten Sheridan, and no, these kinds of pass-the-conceptual-football writing credits never really bode well, do they) gets the music pretty well, even as it fudges some release dates. But the movie’s impersonal, conventional telling of a reasonably standard male coming-of-age story almost tends to make the punk milieu it depicts beside the point.

As the movie opens, Shay (Daniel Huttlestone), a fellow in his early teens who wears flared pants that are at least four years behind the times even by 1977 standards, feels oppressed in his just-outside-of-London home, living with single dad Nick (Dougray Scott) and a little sister. He gets a letter and a cassette tape from his mum, who’s apparently swinging in London, punk style. A few tentative forays to the big city find Shay romancing a sassy punkette named Vivian (Nell Williams), finding that his mum’s communal lifestyle is somewhat more rough and ready than is appropriate for a 15-year-old, and being counseled by Joe Strummer himself, a fellow who seems to turn up in the most unlikely places. For instance, as a fare in Shay’s father’s cab, which Shay is driving, in drag.

It’s a long story, tied up with his dad’s hospitalization after an accident and the subsequent economic doom it portends. While trying to stave off disaster, Shay also experiences the exhilaration of being young and idealistic and in love and actually attending Clash rehearsals. In the hands of more distinctive filmmakers this might come off, but the approach here is indie-slick and impersonal. Which, among other things, underscores just what a boring readymade character young Shay is. When he discovers that Vivian’s home environment is quite a bit posher than she’s let on, he responds with a hissy fit of ugly sexism that you just know is going to be forgiven by both Vivian and the film before the final credits. This might be realistic, but it’s also boring and stale. The portrayal of Strummer by Jonathan Rhys-Meyers (who has a history of portraying rockers simultaneously iconic and iconoclastic; see “Velvet Goldmine”) is, I suppose, an interesting rethink of Strummer’s micromanaged guttersnipe charisma. But it’s one that would have been more interesting in a better film.

As it happens, in 1980 Jack Hazan and David Mingay directed a picture called “Rude Boy,” about a genuinely lumpen young man who hangs out around The Clash long enough to become a roadie for the band. It’s not a good film per se but it’s authentically grungy and purposefully uningratiating, and the band members, playing themselves, have the honesty to depict themselves as not-entirely-nice guys throughout. Not louts, but working performers who can’t be around to hold anyone else’s hand, to say the least. It might make an instructive double feature with this film, which is a confection by comparison. 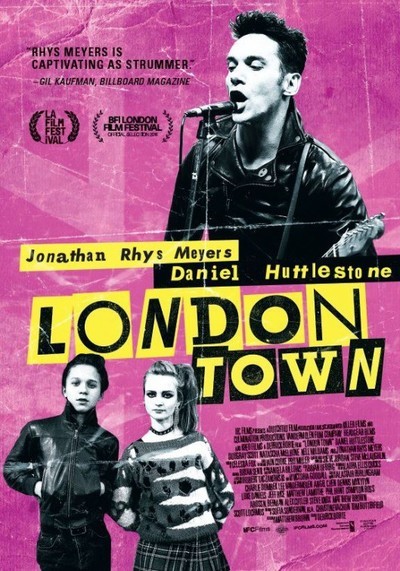 Writer (based on the screenplay "Untitled Joe Strummer Project" by)