Gather round, youngsters. I am, well, mature enough to have witnessed the birth of “Saturday Night Live”—then known as “NBC’s Saturday Night”—back when it was considered a truly revolutionary concept when it premiered in 1975. It was a hipper sort of variety show, an anti-“Hollywood Palace.” One that benefitted greatly from the sense of spontaneity that came from being shot live before a studio audience. And it featured a fearless and hungry troupe of soon-to-be-famous newcomers doing newscast parodies and comedy sketches that were satirical, silly, absurd or all three.

It didn’t take long for early breakouts like John Belushi and Chevy Chase to become not just household names but movie stars. Skits such as Killer Bees and Land Shark as well as such recurring characters as Gilda Radner’s Emily Litella (“Never mind”) and Mr. Bill (“Oh noooo!”) would instantly become part of the vernacular. Much like “Laugh-In” in the ‘60s or “Your Show of Shows” in the ‘50s, it was the very definition of must-see TV. Miss it and you wouldn’t know what your friends were cackling about the following week.

Now, 40 years later, the show is still on the air—probably because NBC hasn’t come up with anything better to replace it on Saturday nights. While it beats infomercials, I am pretty sure I haven’t watched a complete “SNL” episode since Will Ferrell stopped bobbing his head to Haddaway’s “What Is Love?” Nowadays, I wait until Sunday morning to scroll through the highlight clips on my Facebook feed and decide whether they are worth checking out. Face it, I need the sleep more than I need to stay up late just to wade through a lot of subpar material for a few meager laughs and endure the celebrity host du jour flogging their latest project.

I don’t think I am alone in feeling disconnected these days from what the documentary “Live From New York!” presents as a still-revered weekend ritual but what has become in many ways a relic that is past its prime. I don’t think it’s a generational thing, either. I willingly admit that Tina Fey and Amy Poehler might have been the best “Weekend Update” duo ever, and that their Sarah Palin and Hillary Clinton impressions were genius. But “Live From New York!” is required viewing only if the network’s own 3½-hour marathon salute to four decades of skit hilarity earlier this year was not enough of a retrospective for you.

Casual fans might get the most out of this condensed if overly adulatory 82-minute sprint through the decades from director Bao Nguyen. Trouble is, instead of applauding the show’s power to skewer and mock institutions, the doc celebrates the fact that “SNL” itself has become an institution, one that has influenced election results for both Democrats and the GOP by presenting Al Gore as a bore and George W. Bush as a clueless good ol’ boy. It was one thing when Chase stupidly stumbled about as Gerald Ford. It’s another when “SNL” becomes a whistle stop for actual candidates on the campaign trail while trolling for votes. And that makes me kind of sad. “Monty Python’s Flying Circus” never felt the need to invite the queen to join in their reindeer games. They simply inserted a stock reaction shot indicating shock.

On top of that, the film’s constant air of self-importance that is abetted by multiple appearances in footage old and new of the show’s creator and main overlord Lorne Michaels—who took a break for five disastrous seasons starting in 1980, one assumes to ensure that his value was duly recognized—often stifles the handful of opportunities that actually provoke laughter.

Instead of letting us have more than just a few chuckles along the way, Nguyen instead aims to make a serious case for the show’s impact culturally, socially and especially politically. At least he gives a brief hat tip to old-school announcer Don Pardo (frequent host Alec Baldwin suggests the mere sound of his voice announcing who was on each week could make you wet your pants).

However, most of the lip service is paid to topical issues, such as “SNL’s” long-standing problems with diversity – while Eddie Murphy’s talent proved invaluable during the lean years, poor Garrett Morris never really got to showcase his skills much beyond “Baseball’s been berra, berra good to me”—and charges of sexism over the years.

But instead of truly investigating the treatment of females then and now, the message gets confused. “Live From New York” first has Laraine Newman claiming there was no problem since Michaels had always been a champion of humorous women. That is followed with Fey saying that, while there was no institutional sexism, the fact that 70% of the staff that put on the show each week was male did skew matters gender-wise and decided what material made the cut.

At least the doc stirred up memories of controversies that flare up occasionally and provide debate fodder for the news outlets, such as singer Sinead O’Connor protesting the Catholic Church by ripping up a photo of the pope on camera and the uproar over chauvinistic stand-up Andrew Dice Clay’s hosting stint. I had forgotten current cast member Leslie Jones caused a social-media uproar with her bit that dared to touch on the subject of slavery. The role that “SNL” played in leading the way for humor to creep back onto TV in the days after 9/11 also gets a rightful shout-out.

Yes, it is a horrible cliché to suggest that casts of the past were far superior to more recent lineups. But where we once had the Blues Brothers, which spawned a John Landis-directed hit movie, we now get the viral sensation “Dick in a Box.” Is that progress or simply the inevitable need to remain competitive when sex, nudity, cursing and violence are regularly served on cable and online streaming outlets? Discuss amongst yourselves because you won’t find the answer in “Live From New York.” 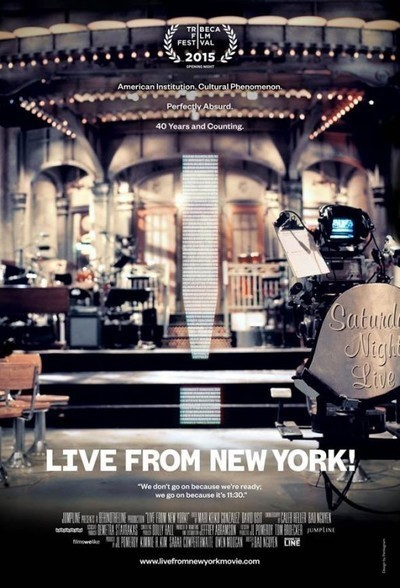 Tom Broecker as Himself

Tina Fey as Herself

Amy Poehler as Herself

John Goodman as Himself

Horatio Sanz as Himself

Rachel Dratch as Herself

Cheri Oteri as Herself

Lorne Michaels as Himself