“Little Monsters,” in which a class of Australian kindergarteners on a farm field trip find themselves surrounded by the undead, handles the zombie comedy with kid gloves. The key to their survival is their teacher Miss Caroline (Lupita Nyong’o), who is able to convince the young ones that it’s all part of a game, and initially receives little help from immature chaperone Dave (Alexander England), and a tormented kid’s TV host played by Josh Gad. It’s all overly precious and just not funny enough, even if it is a blood-soaked tribute to those who would look at the story as just another day of underpaid work.

Nyong'o turns out to be the film’s highlight, and at least it has her in a role that proves she’s game for ridiculousness, and (later on in the film) can master a dryly funny monologue. Along with Jordan Peele’s "Us" proving the Oscar-winning actor's multiple talents, you should hear her sing "Shake It Off" by Taylor Swift here, while (actually) playing ukulele. Even when she’s not displaying an alarmingly tender mezzo-soprano voice, Nyong’o is a life force for “Little Monsters,” cutting through the shrill buffoonery of her male co-leads.

But instead of focusing on Miss Caroline, “Little Monsters” is instead, bafflingly, about a boy with a whole lot of growing up to do: grungy, 30-something Dave. He’s introduced in the film fighting with his girlfriend in the opening credits—watching them spar in various locations not being able to hear what's made them both so angry, the camera floats around them like vignettes. One would expect a zombie to pop up, but no dice. Instead, the story takes roughly 20 minutes establishing him as a now-recently broken up, heavy metal has-been (channeling some major 2000s Jack Black energy) who is just as loud and oblivious as the classmates of his nephew, Felix (Diesel La Torraca). The tedious puppy dog that he is, Dave’s fixation shifts to wooing Miss Caroline when he meets her one day while dropping Felix off at school.

In an attempt to impress her, Dave offers to help chaperone a class trip to a farm, which just happens to be near a US Army base. But before a zombie outbreak next door, things already go disastrously for Dave when he realizes that these kids aren’t as easy to corral as he assumed, and that he has no shot with Miss Caroline. He's especially hopeless against Teddy McGiggle (Gad), a kid's entertainer from America on a world tour, who knows how to enthrall a young crowd, and sweet talk women like Miss Caroline. His chances shot, Dave sulks around, until monsters eventually force the class and the three adults to hole up in a souvenir shop.

Writer/director Abe Forsythe whips up a relatively plain zombie takeover, which is a big tell on the movie’s limited creativity. Yes, there's snarling, flesh-decaying post-humans who saunter around, and sometimes make for gnarly disembowelments straight out of “The Walking Dead.” But there's little inspiration behind the zombies themselves, who don’t create any nervous stakes (even with kids in the mix), or get decapitated in snazzy ways. Nyong’o even has a sequence where she dives into zombie battle, but the film cuts away from it, only showing her after, her dress and hair drastically restyled with blood and guts. It’s another example of “Little Monsters” skipping past even the smallest of gratuitous genre delights—how could you ramp up Oscar-winner Lupita Nyong’o going ballistic on the undead, and then not show us?

The zombie apocalypse of “Little Monsters” largely takes place during the day, a key detail in how the film yearns to balance a light heart with dark comedy. But Forsythe’s script doesn’t have the cleverness to make such a tone pop, instead filling the time with easy, cringeworthy jokes, like often making Gad fall to the ground hard, or watching Dave bumble his way to accidental heroism. “Little Monsters” even has a stereotypical joke about Asian tourists taking pictures, and it would be more offensive if it didn’t seem like it was par for the film’s shallow course. I did laugh hard when a maniacal Gad aggressively cusses out the youngsters—one moment in which adult cruelty barrels through youthful innocence—but perhaps knowing how funny that beat is, and not being able to think of anything else, “Little Monsters” then repeats it over and over, the shock losing its luster.

“Little Monsters” is not for kids, and yet it wants to be as cute as their singalongs, even just by its premise alone. More than with any usual comedy, your mileage will undoubtedly vary with “Little Monsters,” especially if you find kids (with their matching frog backpacks and little observations) unflappably endearing, or man-children instantly worth rooting for. But as someone who constantly struggled to have mindless fun with “Little Monsters”—its self-amusement is far more obvious than it is infectious. 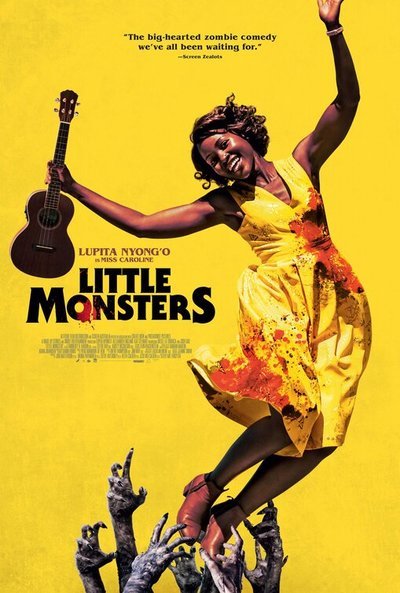