When “Black-ish” star Marsai Martin saw the Tom Hanks movie “Big,” she wondered how the story would work with a race, gender, and age switch. Instead of white male middle-schooler Josh Baskin wishing to be big and waking up in an adult male body, what about a 38-year-old black woman becoming a middle-schooler again? It could be called “Little”! Martin thus became the youngest person to get a producing credit on a Hollywood studio film, and now stars as the young version of an ultra-mean girl boss named Jordan, played as an adult by Regina Hall.

In a flashback, we see why Jordan became so mean: when she was bullied and humiliated in middle school she decided that the only way to protect herself was to become meaner than anyone else. “Nobody bullies the boss,” she declares.

In the present day, Jordan is a boss and a bully. She runs a successful software company decorated with huge blow-up versions of the magazine covers touting her achievements, though her CEO-ship primarily consists of barking orders and insults, swanning around in attire on the cusp between fashion-forward and downright strange, and shrieking at her long-suffering assistant April (Issa Rae) because when she woke up her slippers were further than the mandated 53 centimeters from the bed and she had to stretch her legs to put them on. The horror! Jordan tosses her coat at April like Meryl Streep in “The Devil Wears Prada” and she berates the staff like R. Lee Ermey in “Full Metal Jacket.”

Adults are too terrified to stand up to her. But not the young girl who is an amateur magician, and who is not afraid to ask Jordan why she is so mean.“I got big and I got rich. Who gonna check me, boo?” The girl points her wand at Jordan and makes a wish. And the next day she wakes up inside the body of her middle school self (Martin). This gives April the chance to make some changes at the company – and to rock some of Jordan’s clothes, including an animal-print blouse and gold skirt outfit Jordan correctly tells her makes her look like Cookie in “Empire.” While April is at the office dealing with the threatened departure of an important client, Jordan has to go back to school, thanks to the intervention of a representative from Child Protective Services (Rachel Dratch).

The young/old body-switching premise has been the basis for many films, with “Big” the most successful, along with audience pleasers like “13 Going on 30,” “Vice Versa,” “17 Again,” and four versions of “Freaky Friday.” There is still plenty to explore on this theme, but “Little” misses most of those opportunities in favor of obvious and borderline skeevy jokes about young Jordan coming on to her handsome hunk of a middle school teacher (Justin Hartley), singing tipsily in a restaurant, and being spanked by April. The underwritten middle school scenes are just the usual mean girl versus the kids at the un-cool table in the cafeteria, though Martin shows off some cool '90s dance moves in the school talent show.

Hall and Martin do their considerable best, but Rae's April is the far more interesting character. Rae makes the most of the comedy and the more thoughtful exploration of April’s growing confidence in her own voice. In “Little,” the real story is not the mean girl who gets younger but the assistant who grows up. 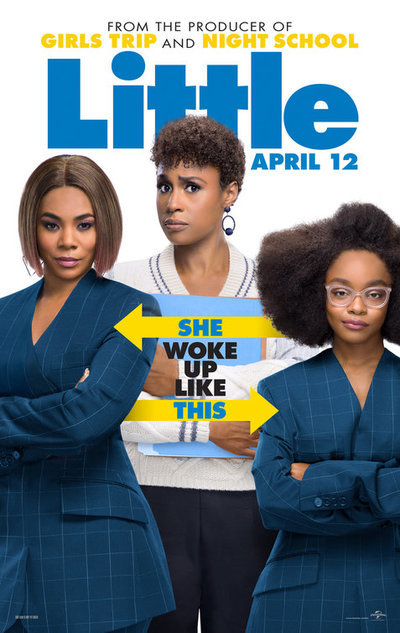