Who would have guessed it? Who would have been able to predict that the plot of one of last year's worst movies could produce one of this year's most endearing comedies? Here at last is proof that the right actors can make anything funny, or perhaps it is proof that the wrong actors cannot. The name of the movie is "Vice Versa," and when they made it last year it was called "Like Father, Like Son." The screenplays for the two movies were amazingly similar, through a rare Hollywood coincidence. But what a difference there is in the movies.

Reinhold plays a Chicago department store executive, divorced, hard-working, upward-bound in his organization. Savage plays his 11-year-old son, who comes to stay for a few weeks while his mother is on vacation. At one point, while they are both touching an ancient gold-trimmed Tibetan skull, they are unwise enough to wish that they could be each other. Through a mysterious magical process that need not concern us, Reinhold and Savage are suddenly consumed in a searing bolt of light, and their personalities are transferred. That puts a little boy into a man's body and, as the title suggests, vice versa.

The movie's plot situations are fairly predictable. The kid goes to the department store in his dad's body, plays with the drums in the musical instrument section, acts like a kid with his secretary and behaves strangely at a board meeting. Meanwhile, his dad, in a kid's body, goes to school in a limousine, barks orders into the phone, finishes exams in three minutes, and talks back to the teachers. In a couple of the best scenes, the kid (as his dad) visits his grade school teacher, and gets even with the bullies who have been tormenting him.

And the dad (as his son) tells his girlfriend things he lacked the courage to say when he was an adult.

All of this is fun, and well done, but it is simply plotting.

What makes "Vice Versa" so wonderful is the way Reinhold and Savage are able to convince us that each body is inhabited by the other character.

They are masters of body language. Notice, for example, the scene where Reinhold demolishes the fifth-grade bullies and then, when he thinks no one is watching him, swings his arm through the air in a joyous boilermaker. Look, too, at the restless and immature way he suggests that a child would inhabit an adult body; children haven't yet had their spirits broken to make them sit still all the time.

Savage, as the adult inside the kid, is equally good at moving with quiet confidence, even impatience, and ordering people around, and expecting to be obeyed. After he calls a limousine and it lets him out in front of the department store, he strides inside and a doorman asks the chauffeur, "Is he famous?" "He's about to be," the chauffeur says, "because I'm gonna kill him." "Vice Versa" is a treasure of a movie, in which the performances hold the key. It's a movie that finds its humor in many small moments of truth and accurate observation, and if there is even a certain gentle knowledge of human nature in this film, you know what? That is not necessarily wrong for a comedy, not even in the cynical weathers that surround us. 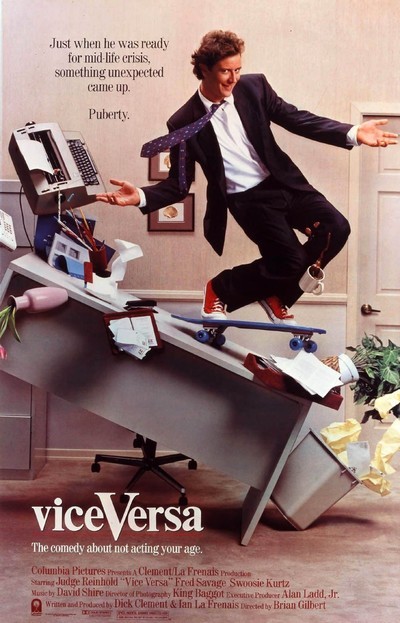