Justin Long plays a fellow named Adam in “Literally, Right Before Aaron,” a movie whose title allusion is explained about 30 minutes in. Aaron is the man marrying Adam’s lovely ex-girlfriend Allison, played by Cobie Smulders, and Adam dated her literally right before. This is something of an issue for Adam.

The movie opens with Adam getting the invitation to the wedding, by phone. Right away we can tell his relationship with Allison was special, because he has brief flashbacks of her face, and the shots all have lens flares in them, and they all look like low-rent ripoffs of similar frames from the Spike Jonze movie “Her,” specifically the parts where Joaquin Phoenix is getting all moony remembering Rooney Mara. So the wedding invite sets him askew. He goes out with work pals Mark (John Cho) and Claire (Charlyne Yi)—did I mention that Adam works in the movie business, or its periphery, editing a nature show for a pompous fake zoologist played by Peter Gallagher?—and he mopes throughout. “Dude. Just bowl. You’re being a douche,” Charlotte tells him. And honestly, writer/director/editor/composer Ryan Eggold, best known for acting on the television show “The Blacklist,” could have ended the movie right there, because what we’ve got for the next 30 minutes is, well, Adam being a douche.

Adam then proposes impulsively to a glossy high-profile girlfriend, whose particular glossiness definitively tags her as Not The One. As she’s about to accept, he blurts, “I think we should break up.” She exclaims, with absolute justification, “You are an a**hole. An A**HOLE.” Storming out of the restaurant, she adds, “You are going to die alone.” Again, this would have made a good ending to the movie. But no. Instead we get an hour-and-a-half of Adam brooding and reminiscing on his shared past with Allison, including their ostensible “meet-cute.” This is really good. He approaches her in the college library while she’s sitting among the stacks reading Of Mice and Men. He says to her, “Do you want to get a coffee, or a juice, or a soda ... ” She replies, “I’m reading my book.”

And he tells her the book’s ending. “I can’t tell if you’re charming or just an a**hole,” she says. I don’t know about you, lady, but I had a pretty good idea during the bowling scene.

Of course, maybe Allison isn’t so delightful either. There’s one restaurant scene flashback that’s meant to evoke “Annie Hall.” Now, only the intent is evident; the evocation itself doesn’t really take. The couple is trying to out-gross-out each other by concocting imaginary crimes against their fellow restaurant patrons. The scenario Allison proposes ends, “and he dies … alone … of AIDS.” Cute.

Back in the present tense, Adam heads to San Francisco to attend the wedding. He accepts an invitation from groom Aaron to play tennis, even though he is incapable of playing tennis. He gets drunk at the wedding and dances like a jerk; he tells a nine-year-old boy to “call me when you’ve got some hair on your balls”; he does some indirect looks-shaming of a character played by Kristen Schaal, and much, much more.

It’s painful to watch. Not because no one cares about Adam’s heartache. But because the movie is boring, trite, sexist tripe that wants to make the viewer empathize with a guy who’s actually pretty aggressive in his pursuit of loserdom. The only achievement Adam seems to have ever racked up in life was in dating Allison, who looks like Cobie Smulders and makes AIDS jokes. And Adam managed to screw that up, and I should care … why? Because Justin Long has a pleasant face? IT’S NOT PLEASANT ENOUGH. Near the end of the movie, Adam defends himself. “Ambush? This isn’t an ambush,” he says to Allison after accosting her in the ladies room at the wedding. Saying this, he’s poking his finger at her in a way that comes close to actual assault. If one of those digits actually lands on her clavicle, it’s going to leave a bruise.

There’s a phrase circulating in contemporary cultural discourse: “mediocre white men.” As a white man who grapples a lot with insecurity and other roiling ups and downs of self-worth even at an advanced age, it’s a group of words that sometimes makes me tetchy. Having watched “Literally, Right Before Aaron,” though, I have a new understanding and appreciation for the term. More importantly, I better understand the people who can’t get their films made while self-pitying, mediocre fare centered on mediocre white men seems to come off something resembling a low-budget assembly line. 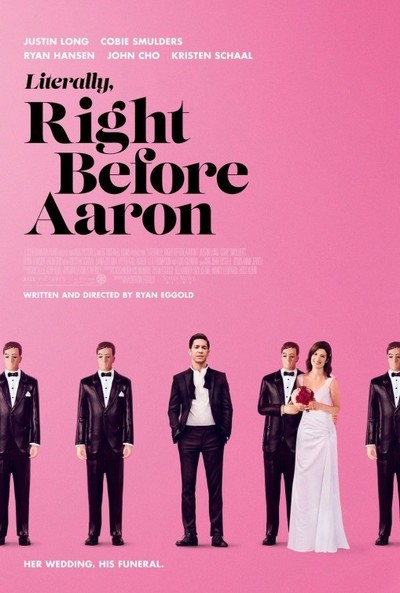