What are they putting in the drinking water over at the headquarters of the Lifetime network? First they offered viewers "A Deadly Adoption," a spoof of their usual melodramatic fare apparently made in secret with co-stars Will Ferrell and Kristin Wiig that was so poker-faced in its comedic approach that it proved to be nearly impossible to tell from the genuine article. Now Lifetime Films, their theatrical offshoot, has given us "Lila & Eve," another film that features a couple of big-name stars—Viola Davis and Jennifer Lopez—in a project not that far removed from what the network airs on a daily basis. The difference between the two is that "A Deadly Adoption" was supposed to be funny and got big laughs from how it dryly mimicked the machinations of its inspirations while "Lila & Eve" is not supposed to be funny—indeed, the central topic is about as unfunny as one could possibly imagine—but nevertheless inspires huge laughs, albeit of the unintentional kind, thanks an idiotic screenplay and a supposedly "shocking" plot twist that even the most inattentive viewers should be able to figure out within the first fifteen minutes or so, tops.

Davis plays Lila, a single mother in Atlanta whose world is shattered when her older son, Stephon (Aml Ameen) is killed when he gets caught in the crossfire of a drive-by shooting. Barely able to take care of herself, let alone younger son Justin (Ron Caldwell), and with the police seemingly uninterested in getting to the bottom of what appears to be just another random shooting, Lila is at wit's end until she joins a support group for other mothers whose children have also been murdered. It is here that she meets Eve (Lopez), a fellow group member who sits off to the side without ever participating, stalks off whenever she feels like it without anyone noticing and who seems less interested in moving on than in having her loss avenged by any means necessary. Naturally, Lila chooses her to be her sponsor, and one night, while engaging in some therapeutic home redecorating (this is a Lifetime production, after all), they find a gun in Justin's bookbag, a discovery that horrifies Lila but inspires Eve to suggest that they go out to look for someone with information regarding Stephon's killing.

Amazingly, the two do find someone with just the kind of knowledge that they are looking for but when he is inconsiderate enough to pull a gun on them, Eve shoots him dead and they flee. When it seems as if they have gotten away with it, the two start moving up the underworld chain of command in order to uncover who ordered the drive-by and to go full vigilante on anyone connected with the crime. As the bodies begin piling up, Lila becomes increasingly unsure of the rightness of their actions while Eve becomes bolder and more daring with each successive hit until a rift finally develops between the two of them and Eve suddenly disappears. Around this time, their actions pique the interest of both the cop (Shea Whigham) assigned to Lila's case and a local crime kingpin (Rey Hernandez) and it appears to only be a matter of time before one of them puts two and two together and figures out who is behind the killings.

"Lila & Eve" is the latest in a long line of films about ordinary people who lose loved ones to horrible acts of violence and who take the law into their own hands when the justice system fails them—a sub-genre broad enough to include the likes of "Death Wish" and "In the Bedroom," to name just a couple. Those two films in particular took the premise seriously and thoughtfully and elevated them above such ugly and debased crypto-fascist revenge-porn fantasies as "An Eye for an Eye," "The Brave One" and all the "Death Wish" sequels. "Lila & Eve" doesn't hesitate for a moment before heading down the latter path thanks to a screenplay by newcomer Pat Gilfillan that constantly seesaws between the stupid and the sickening as our heroines stalk and dispose of their prey with startling ease. These moves have been depicted by director Charles Stone III in the most passionless manner imaginable—even though this was always intended to be a theatrical release, his approach to the material is as blandly formulaic as the weakest offerings on the tube. Instead of the rage, anger and emotional confusion this material should inspire in viewers, they will mostly be veering between bad laughs and utter boredom.

Then there are the endings, of which I will be as circumspect in discussing as possible, though more sensitive readers should consider this to be a Spoiler Alert for the following paragraph. As it turns out, the entire story is building towards a shocking plot twist that introduces the final act and is meant to make us reevaluate everything we have seen up to that point. The only problem to this is that the twist is so obvious and so lame that virtually everyone will be able to pick up on it early on. This is followed by a final scene with the support group that, without giving it away, may have sounded noble on paper but which plays out in such an odious manner that most viewers will be appalled by the lengths that the filmmakers have gone to let their characters off the hook for their admitted crimes.

Despite the film being simply awful through and through, the usually excellent Viola Davis (who also served as a co-producer) does her damnedest to make something of her character and while not even her undeniable gifts make anything of it, it is oddly inspiring to see her at least making the effort. Lopez, on the other hand, coasts through in a particularly lackadaisical manner that is only partially explained by later revelations about her character. Students of film history will note that this is the second time that Davis and Lopez have appeared together in a movie—the first one being Steven Soderbergh's brilliant 1998 crime romp "Out of Sight." Needless to say, if you see only one Davis-Lopez joint this weekend, make it that one and let "Lila & Eve" on its way to a permanent berth as a basic cable staple. 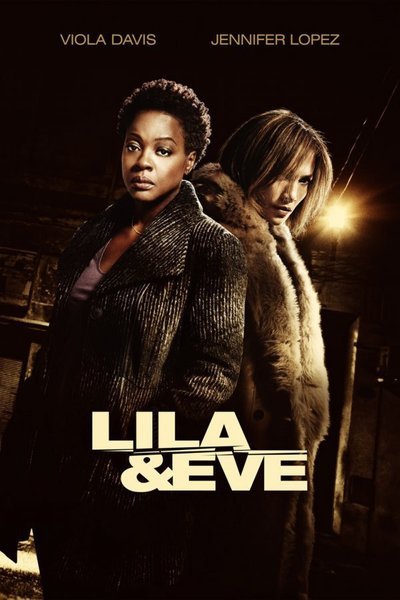