The professor and the call girl

There is a shot about a third of the way through "Like Someone in Love" of a pretty, perky young lady emerging from an apartment bathroom a different woman. Her hair no longer tied up in a bun but falling wide at her shoulders, her feet bare, her legs no longer moving with girlish timidity but easing along in languid strides that show off their shapeliness. She moves down the hallway to the bedroom, turned away from the camera as the rustle of her simple dress fills the silence. An invitation.

The effect is nearly as jaw-dropping as the helicopter attack in "Apocalypse Now," a quiet demonstration of shock and awe. She's in the apartment of an elderly professor, and he wasn't expecting this. How did writer-director Abbas Kiarostami choose to convey this moment of attempted seduction? A tracking shot behind the woman's swaying hips? A slow pan up the curve of her calves as she slinks away? A panicked handheld shot of the professor reacting to this provocation? No, he just offers a steady view of her trip to the bedroom, letting the moment breathe softly into our ears. An Iranian, Kiarostami has learned from the restrictions his government imposed upon filmmakers how to convey sensuality and smoldering inner life in ways that would force a censor to confess to having a filthy mind.

Unlike many of his Iranian peers, Kiarostami didn't encounter much censorship during production of classics like "Close-Up" and "Taste of Cherry" but simply found some of his films banned. He once analyzed the situation: "I think they don't understand my films and so prevent them being shown just in case there is a message they don't want to get out."

That was when Kiarostami was still working in Iran. He started making films a decade before the Iranian Revolution but stayed for decades after many colleagues fled the authoritarian regime. His rationale was that not remaining rooted in one place would have an effect on his filmmaking like constantly uprooting and replanting a tree would have on its fruit. After directing nearly 50 "rooted" films, he's now roaming the earth. His 2010 masterpiece, "Certified Copy," was shot in Italy and this one takes place in Japan. Yet the tight formal control and discretion remain. These strange new entries in an already strange and unpredictable filmography are the harvest of 40 years.

The befuddled but wise professor in "Like Someone in Love" struck me as a Kiarostami avatar, dispensing his wisdom to the young call girl/college student who ends up in his apartment by happenstance — which, typical of Kiarostami, is the result of many offscreen events that our imaginations must provide. (And if you're looking for a plot description right about now: sorry, friend. There is something like a plot unfolding in this film, but it's best discovered cold.)

The filmmaker is interested, as ever, in shape-shifting roles, surfaces and relationships, but Takashi (Tadashi Okuno), the acclaimed professor who finds himself caught in the middle of a young couple's turmoil, sounds a lot like the somewhat conservative and male chauvinist Kiarostami, who once told an interviewer that men are work-oriented whereas women are affection-oriented; that "marriage is essential for all women." (Kiarostami condemns one character who failed in life's marriage sweepstakes by framing her in a claustrophobic window sill that might as well be at Tochigi prison.)

The director who usually seems stoic because of his ubiquitous aviator shades, but actually wears them because of sensitivity to light, likewise keeps a tidy frame with precise, geometric arrangements and movements but is quite tender when relating a moment of affection or protectiveness. As with other great directors who understand the power of the frame, the former quality supports the latter. When the would-be seductress Akikio (Rin Takanshi) first explores Takashi's apartment, Kiarostami pans along at her pace, allowing us a tour of his bursting bookshelves and papers piled everywhere. Takashi's life story is told through carefully placed family photos and artworks.

Later, we learn that the professor has assumed the role of the call girl's "father" with almost desperate passion — not from histrionics or speeches but through revealing, repetitive actions. Messages on his antiquated answering machine let us infer that he's breaking a longstanding orderly routine to become this girl's protector. He ignores all business calls the instant he learns she's in trouble, and gets to his feet with as much vigor as an often desk-bound 80-year-old can muster.

All of which might sound pretty slight, but Kiarostami's eye and ear render it all in an intriguingly odd, often absurd light. So many of his long-take compositions could stand up to hours of museum scrutiny, which is not surprising for a commercial-illustrator-turned-director who has been experimenting with ways to suggest as many possibilities in a single (sometimes rock solid, sometimes constantly shifting) frame as possible since 1970.

Many critics have noted the wondrously jam-packed and disorienting opening shot inside a nightclub, but every shot in the film, really, is its own universe. Window panes and mirrors often relieve Kiarostami from cutting to and fro by including an offscreen character in a gorgeously warped, faded reflection. His joy in discovering a shimmering new canvas, the city of Tokyo, comes through in each cut to something quietly astonishing. It helps that sound designer Mohammad Reza Delpak makes such an enveloping "score" out of Tokyo's ambient urban cacophony.

Some critics who saw the film at Cannes last year had trouble with how abruptly and weirdly it ends. I'm semi-spoiling it for you now so that maybe you'll make less of it. The characters in "Like Someone in Love" are not very strong-willed or dynamic. The promise of income and social advancement in a ruthless economy lure them to adopt roles that fit them uncomfortably, which further prompts them to take on other roles that help conceal their shame and vulnerability.

Kiarostami presents indefinite people with indefinite motivations and desires. The way this film ends is perfect, I've decided (after wrestling with it for a few weeks) because it's a bracing slap to the face of not just these characters who have been slumming, pretending and withholding, but to many of us who might be going through life on some kind of autopilot. The film's craziest, most easily mocked character emerges as the one most fully alive. Old Kiarostami, master of paradoxes, is set in his ways, but his ways are never set. 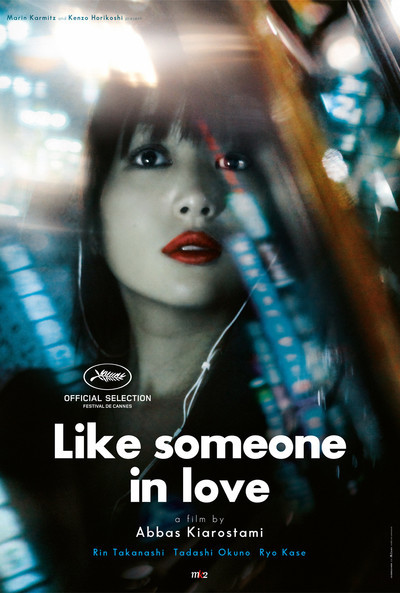