“Like A Boss” is a movie written and directed by men which bears very little resemblance to how women actually relate to each other.

The comedy from director Miguel Arteta and writers Sam Pitman and Adam Cole-Kelly nestles uncomfortably on the flimsy premise that the powerful founder of a cosmetics empire would go out of her way to destroy a decades-long best friendship between struggling entrepreneurs out of spite, or for sport, or a combination of the two. In its tone-deaf crassness, “Like a Boss” struggles mightily to make the most of its R-rating, but the characters’ dialogue and antics tend to be more awkward than shocking.

And then, as so many half-baked raunchy comedies are wont to do, the film attempts a head-spinning, 180-degree turn toward sentimentality at the end. As the briefly estranged besties tearfully reconcile and apologize to each other for their misdeeds, they admit to a litany of supposedly damaging flaws that we’d never seen evidence of previously.

Even the IMDb plot synopsis of “Like a Boss” tells a more complete story: “Two friends with very different ideals start a beauty company together. One is more practical while the other wants to earn her fortune and live a lavish lifestyle.” This is not the movie I saw. This is a movie in which characters stand around explaining themselves to each other and we still have no idea who they are.

The prospect of watching Tiffany Haddish and Rose Byrne play off each other held promise, but these towering and talented comic figures can only do so much with what little they’ve been given on the page. Salma Hayek fares even worse as a cartoon character of a villainess. As the flashy and narcissistic Claire Luna, she’s been made up to look like a petite, real-life Jessica Rabbit, with mounds of dramatic red waves, bright-green colored contacts and an array of form-fitting power outfits and platform pumps. She walks around her glassy, minimalist office smashing things with a golf club for fun—which, again, is more awkward than shocking.

Hayek previously worked with Arteta on “Beatriz at Dinner,” providing the moral spine of the social satire as an unexpected dinner guest: a Latina holistic healer who becomes the increasingly uncomfortable voice of reason in the midst of white, wealthy privilege. She brought just as much of a specific and focused portrayal to that character as she does here; the difference is, as Beatriz, she had the benefit of a sharp Mike White script from which to work.

Like previous (and far more successful) hard-R comedies such as “Bridesmaids” and “Girls Trip,” “Like a Boss” tries to extrapolate the beats and tone of a bromance onto a story of female friendship. Haddish’s Mia and Byrne’s Mel have been best pals since middle school. They started a cosmetics company in their garage in college. Now, 20 years later, they’re the co-founders of their own eponymous makeup line, which they sell online and through a brick-and-mortar Atlanta store. And they’re still single and living together, which their married-with-kids friends (Jessica St. Clair, Natasha Rothwell and Ari Graynor) view with a mixture of concern and envy. The movie itself doesn’t know how to regard them, either. Are they an admirable example of loyalty? Or are they stunted and in need of some time apart to grow?

But when the glamorous Claire Luna swoops in and offers to buy out their company—for ridiculous, nefarious reasons that eventually become clear—it drives a wedge between the friends. Mel, the levelheaded one, wants to say yes to alleviate their significant debt; Mia, the creative one, is mistrustful of Claire and reluctant to give up control. Many misguided wacky antics ensue, followed by empty platitudes about the importance of sisterhood and celebrating your inner beauty.

There’s very little of the effervescent brashness that has made Haddish such a joy to watch over the past few years. Similarly, Byrne has shown she’s game for anything and served as a sly and delightful straight woman; here, she’s stuck playing the uptight voice of reason. And as their employees, Jennifer Coolidge and Billy Porter get little to do besides serve up sassy one-liners and bemused reaction shots. (Although Porter’s presence is the only reason this movie gets one star; his single scene of high drama provides a much-needed laugh.) 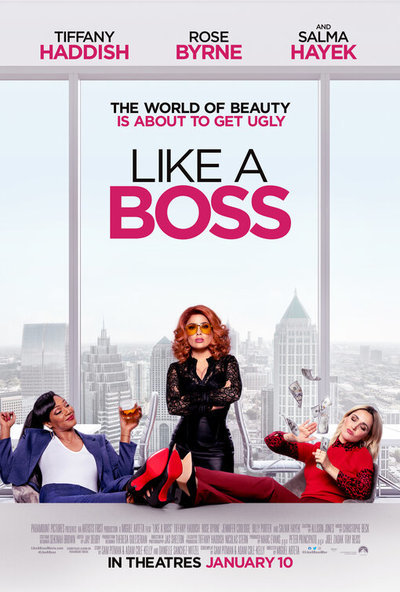 Rated R for language, crude sexual material, and drug use.