Let's Spend the Night Together

It all comes down to the difference between a "concert film" and a documentary. “Let’s Spend The Night Together” is essentially a concert film recording an "ideal" Rolling Stones concert, put together out of footage shot at several outdoor and indoor Stones concerts. If that's what you want, enjoy this movie. I wanted more. I would have been interested in a film exploring the phenomenon of the Rolling Stones, who bill themselves as the greatest rock 'n' roll band in the world, and are certainly the most durable. I would have liked to know more about the staging of a modern rock concert, which is arguably the most sensually overpowering nonwartime spectacle in human history, and which may have been invented, in form and in its focus on a single charismatic individual, at Hitler's mass rallies. I would have liked to know more about Mick Jagger; how does it feel for an educated, literate, civilized man in his early forties, with a head for figures and a gift for contracts and negotiations, to strut with a codpiece before tens of thousands of screaming, drug-crazed fans?

“Let’s Spend The Night Together” does not answer these questions nor, to be fair, was it intended to. It is wall-to-wall music. The movie sells well in home video form; it's a cinematic Top Forty with Jagger and the Stones performing many of their best-known hits. But after a certain point it grows monotonous. At the beginning of the film I was caught up in the Stones' waves of sound energy, and fascinated by Jagger's exhilarating, limitless onstage energy. By the end of the film I was simply stunned, and not even "(Can't Get No) Satisfaction" could quite rouse me.

The movie was directed by Hal Ashby, a feature director whose credits include “Shampoo” and “The Last Detail”. It was reportedly photographed with twenty-one cameras, under the direction of cinematographers Caleb Deschanel and Gerald Feil. They've got a lot of good stuff on film, but they haven't broken any new ground. The best rock documentary is still “Woodstock” (1970), and the best concert film is probably Bette Midler's “Divine Madness!” (1980). The Stones have been filmed more powerfully before, too, in “Gimme Shelter”, the stunning 1969 documentary of the Stones' Altamont concert, at which a man was killed.

The worst passages in “Let’s Spend The Night Together” are the songs in which Ashby and his collaborators try to get seriously symbolic. There is, for example, a montage of images from a suffering world: starving children, a Buddhist monk immolating himself, the skeleton-like bodies of famine victims, decapitated heads of political prisoners, etc. The idea, I guess, is to provide visual counterpoint to the Stones' apocalyptic images. The effect is disgusting; this particular movie has not earned the right to exploit those real images.

The best passages involve Jagger, who is just about the whole show, with the exception of a truncated Keith Richards solo and a strange interlude during which would-be beauty queens invade the stage and dance along to "Honky Tonk Woman." Jagger is, as always, the arrogant hermaphrodite, strutting proudly before his fans and conducting the songs, the band, and the audience with his perfectly timed body movements. There is an exciting moment when he climbs down into the crowd and, carrying a hand-held mike, sings as he is lifted on a surge of security guards from one side of the auditorium to another.

It's fun, but it's about the only time we see the audience in this movie; Ashby apparently made a directorial decision to keep the audience in long-shot, making them into a collective, pulsating mass. But that limits his possibilities for setting up visual rhythms in his editing. In such landmark rock films as “A Hard Day’s Night” (1964) and “Woodstock”, the audience provided not only counterpoint but also emotional feedback. “Let’s Spend The Night Together” seems to have been pretty closely calculated as just simply the record of a performance, and if that's what you want, that's what you get. 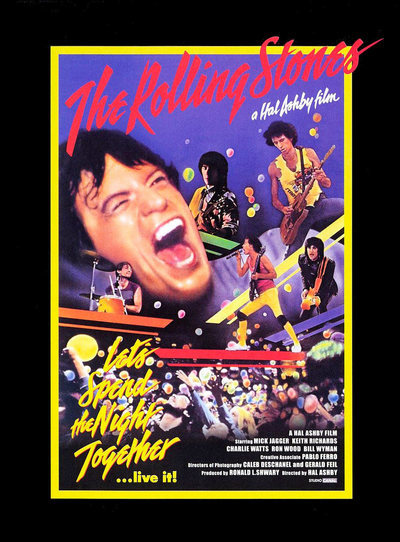