With great power comes great comedy. Well, sometimes. Writers have spent the history of film mining the concept of people without any discernible skill sets turned into figures of authority. And the last few years have seen a lot of comedy mileage in the subgenre of man-children broken out of their doldrums by living lives distinctly not their own (that was the draw of “The Hangover” and “Jump Street” movies—normal guys in abnormal situations). Into both of these comedy pools, we can now throw “Let’s Be Cops,” with TV stars Jake Johnson and Damon Wayans Jr. (both of FOX’s “New Girl”) as a pair of average guys thrust into a life-changing dynamic when they pretend to be police officers.

The best of these movies contain enough edge to be cautionary tales. Don’t be the party animals of “The Hangover” every weekend or risk great bodily harm. The grass on the other side of the fence isn’t just a duller shade of green than we first expect but it’s laced with poison. There's no poison here. Despite a premise rife with potential dark humor, there’s too little edge in “Let’s Be Cops.” Director/co-writer Luke Greenfield chose wacky over witty and the result is a film with no sense of danger, no reason to care and not enough laughs to make the sitcomish handling of a strong premise forgivable.

Ryan (Johnson) is a mostly out-of-work actor whose most infamous credit is a commercial for STD medication. He’s not in a very good place. Neither is Justin (Wayans), a video game developer who doesn’t quite have the spine to stand up to his annoying boss (Jon Lajoie), who takes his hard work on a game about a police officer and turns it into Firefighters vs. Zombies. To research that game, Justin came into possession of a pair of legitimate police officer uniforms, and Ryan convinces his more uptight buddy that they should use them to attend a costume party reunion (that turns out to be more of a masquerade ball, further embarrassing our heroes). Dejected after the reunion reminds them of their recent failures, Ryan and Justin are walking the streets of L.A. when they realize that the uniform commands a certain kind of respect and admiration from the ladies. Why not be cops a little longer?

Well, because it’s highly illegal and incredibly dangerous, of course. Justin realizes this and tries to put a stop to it but Ryan becomes relatively unhinged, buying a cop car on eBay and pulling people over. And the pair even gets involved in a real case involving the gorgeous daughter of a restaurant owner (Nina Dobrev), who becomes a love interest for Justin, and a maniacal gang leader played with physical fury by James D’ Arcy. Rob Riggle pops up as a real cop who crosses paths with the two while Keegan Michael Key steals a few scenes as an over-the-top dealer.

Those early montages of Johnson and Wayans breaking out of their shells by donning the outfits that give them the confidence to do so have a great comedic energy. These are two talented actors, and it looks like “Let’s Be Cops” is going to give them a chance to really find an audience they deserve with a breakout film. And then the film goes absolutely nowhere. To say that “Let’s Be Cops” spins its wheels tonally would be kind. “Paul Blart: Mall Cop” had more edge. The cops of "Superbad" had more edge. Whereas Johnson seems ready to do something truly dark—his character’s increasing willingness to push his false authority could have and should have sent this piece into “Observe and Report” levels of black humor—his writer/director doesn’t seem to want to go with him. Like so many sitcoms or Adam Sandler movies, “Let’s Be Cops” doesn’t take place in the real world. It’s a comedy universe without danger or repercussions. Worst of all, it simply doesn’t have the laughs to make the zany approach feel like the right one. Don’t be edgy, fine. But at least be funny. 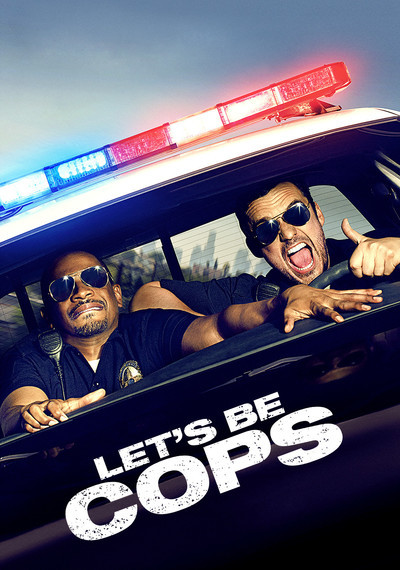 Rated R for language including sexual references, some graphic nudity, violence and drug use