Let Them All Talk

Steven Soderbergh’s “Let Them All Talk,” premiering on HBO Max this week, is a deceptively light film about heavy things. So many of his movies are. As one of the best American filmmakers, his most escapist fare hides deeper meaning and his unimpeachable craft shapes what may seem to be ordinary, mundane lives into something fascinating and deep. His latest was filmed over two weeks on the Queen Mary 2 and reportedly comprised of almost entirely improvisational scenes (although one can hear the voice of credited writer Deborah Eisenberg in enough of the exchanges that some of those reports may be slightly exaggerated). It’s the rare story of older women that doesn’t feel manipulative or glib, depicting three former friends coming to terms with how the success of one of them changed everything forever. Meanwhile, it counters that story through the eyes of a young man for whom his aunt has always been larger than life, and how other people who orbit around her, including an agent, are subject to her moods and whims.

Alice Hughes (Meryl Streep) is a world-famous, Pulitzer Prize-winning author who has been asked to go to England to accept an award. She can’t fly, and so she convinces them to pay for her to take the Queen Mary across the ocean, and to spring for three people to accompany her—old friends Roberta (Candice Bergen) & Susan (Dianne Wiest) and her supportive nephew Tyler (Lucas Hedges). It’s been years since the biggest book of Hughes’ life, You Always/You Never, one that turned her into a household name and one that her new agent Karen (Gemma Chan) is hoping she’s finally writing a sequel to on the ship. Without Alice’s knowledge, Karen actually hitches a ride, drawing close to Tyler in the hope that he can find out something about what the reclusive author is working on. Of course, Alice will eventually discover Karen is on board, but this is not the comedy of errors it could have been with its set-up.

Soderbergh and Eisenberg wisely avoid turning “Let Them All Talk” into a star vehicle for Streep, spending most of the time with Hedges as he navigates these tricky relationships. Susan is an advocate for incarcerated woman in Seattle who doesn’t seem to realize or care that Alice’s biggest hit used her real-life friends as templates; on the other hand, Roberta is obsessed with it, convinced that the only reason she’s on the cruise at all is so the author can study her for the sequel. Wiest is typically solid here, but it’s Bergen who’s phenomenal—as good as she’s been on film in decades. She captures Roberta’s dissatisfaction with life—she works a retail job she hates and stalks the bars on the ship to try to find a man to support her—without ever turning her into the shallow cliché she could have become. It’s one of my favorite performances of the year.

Soderbergh gives his cast the freedom to workshop these characters, finding their flaws and strengths through conversation, while he places them cinematically in the gorgeous backdrop of the Queen Mary 2. Under his pseudonym as cinematographer, Peter Andrews, he captures the imposing beauty of the ship both above deck and through its many bars and corridors. There’s joy in just watching these characters navigate the confined landscape of the film, and he also edits it together wonderfully under another pseudonym, Mary Ann Bernard. He really does do it all.

How does success change a friendship? How does expectation lead to doubt? Eisenberg, Soderbergh, and their cast play with questions like these without overemphasizing them. They allow the characters to wander off into subplots—Tyler expectedly falls for Karen, for example—without worrying about reining them into a traditional narrative. It’s a film that will be, well, too talky for some people (although those people can’t really feign ignorance given the title), but there’s something invigorating about a movie that’s more concerned about well-rounded, genuine people than traditional Hollywood archetypes. And the movie's casual, hang-out feel is buoyed by Soderbergh’s top-notch craftsmanship. This could have been totally shapeless in the wrong hands.

“Let Them All Talk” may be ultimately effective more as a collection of scenes than an overall piece. A last-act plot twist feels forced, and I enjoyed the film much more in its late-night conversations in bars or walking the deck of the Queen Mary 2 than I ever did when its more traditional plot kicked in (and a subplot with another world-famous author on the ship feels undercooked). Having said that, it’s a wonderful film to experience as an acting and filmmaking exercise. Just take the trip.

Available on December 10 on HBO Max. 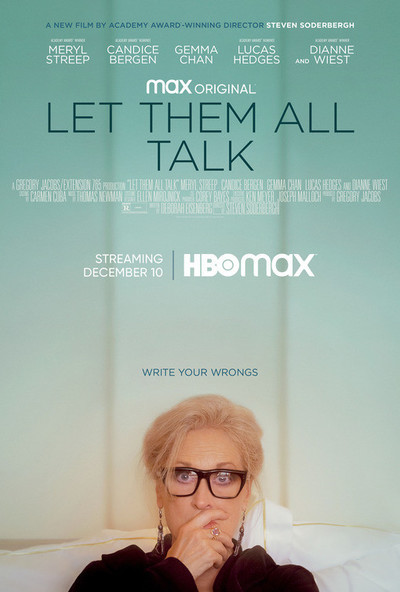