The water’s too hot in the kitchen sink. A black horse quietly returns to the ranch, riderless. A scoop of ice cream falls from a little boy’s cone onto the sidewalk.

Subtle moments, all, but they do so much to set the scene and establish the themes of regret and redemption in “Let Him Go.” This is the kind of solid, grown-up drama we don’t see very often anymore. In a world of superhero blockbusters, this low-key throwback of a Western is the stuff of timeless cinema, but it may as well be a unicorn. Understated in its quiet rhythms and vast beauty, it’s also fortified with strong performances and, eventually, punctuated by shocking moments of violence.

Director and writer Thomas Bezucha takes his time getting to that point, though, in adapting Larry Watson’s novel of the same name. His work—particularly in the beginning—is reminiscent of Clint Eastwood’s style, both in its setting and in the efficiency of its spare storytelling. Bezucha makes clear who these characters are from the get-go in the clear and simple ways they interact with each other. He also establishes an air of danger for the young child who will find himself at the center of the story’s conflict. It’s quick but effective in putting us on edge.

Kevin Costner and Diane Lane are in top form as George and Margaret Blackledge, a retired sheriff and his horsewoman wife living on a Montana ranch in the early 1960s. Working with cinematographer Guy Godfree, Bezucha lets us luxuriate in the endless, blue skies dotted with fluffy, white clouds. Lane and Costner share a strong and seamless connection as a long-married Midwestern couple—especially having played Ma and Pa Kent in the DC universe, speaking of blockbusters. The comfort of their mundane, daily interactions provides the foundation for the way they’ll ultimately fight for each other when the time comes.

At the film’s start, the Blackledges share their modest home with their son, James (Ryan Bruce); his wife, Lorna (Kayli Carter, so great in “Private Life”); and their infant son, Jimmy. But when James dies in a horseback riding accident, their insular, peaceful world is understandably shattered. A few years later, Lorna remarries Donnie Weboy (Will Brittain), but it’s obvious from their dour civil ceremony and the way she offers her cheek when he tries to kiss her lips that this is a union of necessity. A chance encounter in town soon afterward, when Margaret witnesses Donnie’s casual cruelty, makes it clear that her grandson is in danger. The way Bezucha stages this scene—suddenly, wordlessly, from afar through the windshield of her wood-paneled station wagon—gives the moment a startling power. The horror that flickers across Margaret’s face is palpable.

Determined to rescue her only grandson and the last connection to her only child, Margaret quickly jumps into action. That means whipping up a delicious frosted lemon cake and flashing her warmest smile. Lane is dazzling as she turns on the charm, knowing exactly how charismatic she needs to be in every situation to get what she wants. Costner, by contrast, is stoic and circumspect—a posture he could achieve in his sleep, but he imbues the role with an undercurrent of melancholy. There’s also the matter of George’s drinking, which “Let Him Go” introduces as a defining character trait without overdramatizing it in a cliched manner.

But as the couple ventures into North Dakota to track down Jimmy at the Weboy family’s remote compound, they discover they’ll have to contend with another tough-as-nails woman who also knows how to manipulate people with the help of home cooking. Pork chops are the weapon of choice for Blanche Weboy (Lesley Manville), the steely matriarch of a generations-old mob family. All red nails, cigarettes and toying, loud laughs, Manville tears it up in this showy role—so much so that it almost feels like she sauntered in from a totally different movie. It’s fascinating to watch but also a little jarring. As deliciously withering as she was in “Phantom Thread,” she’s deliriously over-the-top here.

As her brother, Bill, Jeffrey Donovan finds a more understated tone to his menace, most notably in a tense sequence when he drives George and Margaret out the isolated Weboy homestead. They don’t know what they’re in for, but they know it’s no good. Along the way, the couple also encounters a young Native American loner (Booboo Stewart) who conveniently shows up to provide geographical and spiritual guidance. He’s more of a concept that an actual human being.

What makes Blanche and Margaret so fearsome in their own ways, though, is that they’re both survivors. And they draw on that fierce, mama-bear instinct as the film reaches its fiery conclusion. Neither of them is willing to let anything or anyone go, and that essential character work keeps us hanging on even as the narrative runs wild. 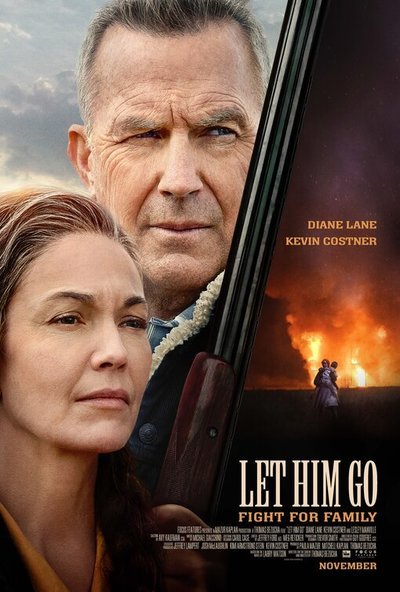 Will Brittain as Donnie Weboy