In Search of Lost Time, Marcel Proust’s seven-volume novel (whose French title was originally translated into English as Remembrance of Things Past) was hailed as a masterpiece when it was originally published between 1913 and 1927. Now, it is regarded as one of the most important works in all of 20th century literature. By making a decisive break from the more realistic and plot-oriented fiction of the previous century in order to serve as a meditation on memory and the whole of human experience, In Search of Lost Time reshaped one’s notions of what could be accomplished in the novelistic form. Its influence can be still be felt in everywhere from references in television shows ranging from “The Sopranos” to “Monty Python’s Flying Circus” (“If you’re calling the author of 'A la recherché du temps perdu' a loony, I shall have to ask you outside”) to the instantaneous response inspired by the mere mention of a madeleine. In Search of Lost Time has become the literary equivalent of the opening notes to Beethoven’s Fifth Symphony.

While its importance in the history of letter cannot be denied, how many people, outside of the halls of academia, continue to make a habit of reading it these days? After all, it's long, complex, and, as far as I can recall, there's not even a single reference to a crawdad, let alone any suggestion of their singing ability. Sure, it's easy enough to carry it around on a Kindle but who actually goes through the effort of cracking it open? As it turns out, such people do exist and “Le Temps Perdu,” the new documentary from Maria Álvarez, follows a group of them as they take their continued fascination with Proust’s work to extraordinary—some might say excessive—levels.

Alvarez’s first film, “Las Cinéphilas,” focused on a group of retired women who attend the films every day, using the power of art to give them a soothing way of forgetting the passage of time. Here, she approaches the same conceit from a different angle and utilizes a different artistic medium by focusing on a book club comprised of elderly men and women who have been meeting regularly at a Buenos Aires cafe since 2001. There, they sit around and read aloud from In Search of Lost Time paragraph by paragraph, frequently stopping frequently to discuss the ideas and meanings behind Proust’s words. Although the conversations often dovetail to talks of the lives of the individual members of the group, Proust’s work is the focus. When they finally arrive at the end of the book, they start it all over again. (As the film begins, they are on their fifth go-around.) One member does attempt to convince the others to form a second group dedicated to reading Dante’s The Divine Comedy, but, suffice it to say, it does not go over well.

Yes, I understand that watching a group of senior citizens reading aloud from Proust may not exactly sound like a gripping 100 minutes of cinema for a lot of you. Frankly, it didn’t initially sound that exciting to me, but it does actually work. Listening to these people grapple with Proust’s work and relate it to their own individual lifetimes of experience is often fascinating. Alvarez wisely keeps her distance as a director, content to quietly observe her subjects as they go about their mission delving into the past (a point accentuated by the lovely black and white photography) while the contemporary world bustles on outside the doors of the café that the film, aside from a few brief transitions, never leaves.

If there's a major flaw to “Le Temps Perdu,” it's that it may be just a little too much of a good thing—Alvarez’s obvious love for her subjects means that she sometimes allows things to go on just a little too long. That said, as an observation of the power of literature and how reading the same book multiple times can still yield new and fascinating observations, the film is a sweet, touching work that viewers with a pronounced literary bent should warmly embrace. Who knows—once it ends, they may even find themselves inspired to begin their own exploration of the book as well. 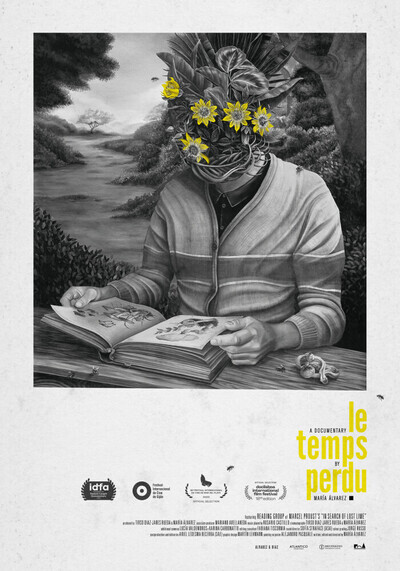 Norma Bárbaro as Self - Reader