Anyone with a Netflix account can attest to the wealth of essential content available to stream online. From Oscar-nominated documentaries like “What Happened, Miss Simone?” and “Winter on Fire: Ukraine’s Fight for Freedom” to oddball curiosities like “A Very Murray Christmas” and the upcoming “Pee-Wee’s Big Holiday,” Netflix is one of many viral platforms providing a place for great films and programs not coming to a theater or TV network near you. With that said, the Internet has also enabled the creation of entities that should never have existed in the first place. Case in point: “Lazer Team,” a would-be sci-fi comedy arriving on the new paid subscription service, YouTube Red (as well as in a handful of theaters). I frankly can’t imagine a worse film to utilize for wooing potential subscribers.

Of course, “Lazer Team” already has a sizable built-in fan base, considering that it’s the first feature from the Austin-based studio, Rooster Teeth, best known for their very funny web series, “Red vs. Blue.” The deadpan quips that work so well in seven-minute chunks are destined to grow tiresome when stretched to feature-length, yet this film doesn’t even contain the wit that once defined Rooster’s Teeth’s brand. It is the most obnoxiously unfunny comedy in many a moon, featuring four alleged protagonists so thoroughly repellant, the audience will find themselves quickly rooting against the survival of humanity.

What’s striking is how the film is reflective of its own shortcomings. The story unfolds in a world where everyone’s worth is weighed in likes, views and friend requests. Superhuman warrior Adam (Alan Ritchson) has been raised from birth to defeat otherworldly invaders in a duel that will determine the planet’s fate. Yet with the battle only a few days away, Adam’s lifetime of training is rendered irrelevant by four self-serving schmucks who stumble upon his armor and try it on for size. Once the high-powered equipment fuses to their bodies, the government is forced to allow these amateurs to take the place of a seasoned master—plus their online popularity doesn’t hurt either. It’s somehow fitting that “Lazer Team” had the most funded film campaign to date on Indiegogo, and that the film’s endless end credit roll devotes over three minutes to listing its donors, who have names like Flaming Muskrat (these names earn the film’s only laughs). This movie is, in essence, a product of fame and money without the slightest tangible shred of effort.

Sure there are plenty of expensive effects onscreen, but the live-action visuals are so crisp that they cause the digital animation (such as the generic martian designs) to stick out like a sore thumb. This wouldn’t be as big of a distraction if the characters were the least bit engaging, and this is where the film fails on an epic scale. Consider Hagan (played by Rooster Teeth co-founder Burnie Burns), an impotent cop treated by everyone—including the filmmakers—as a pathetic punching bag. He’s reluctantly accompanied by a teenage punk, Zach (Michael Jones), who has a habit of getting tasered and likes to punctuate his lines with the word “bitch.” There’s also an embittered loser, Herman (Colton Dunn), who blames Hagan for the mess he’s made of his own life, and the village idiot, Woody (Gavin Fee), who says dumb things that are so dumb they’re—well, tedious. A typical example of the film’s astonishingly lazy humor occurs when Woody’s friends inform him that the alien he’s greeting is, in fact, a recording. “Greetings Recording from the planet Record!” he hollers, as if anticipating canned guffaws.

Burns and director Matt Hullum share co-screenwriting credit with two other scribes, and together they have crafted an interminable string of jokes involving masturbation, vomit and guys getting hit in the crotch. Add to that a dose of gay panic, a plethora of dialogue about “banging chicks” and a mean-spirited streak of put-downs, and you’ll have an accurate approximation of this film’s so-called “comedy,” which would only find itself welcome at a frat party populated by junior high schoolers. Aside from a few cute touches, such as a fleeting nod to Atari’s immortal Pong game, “Lazer Team” is so putridly awful it could give “The Ridiculous 6” a run for its money. And since “Ridiculous 6” is already Netflix’s most-watched film of all time, I fully expect “Lazer Team” to become a big hit as well. But to all the Indiegogo donors who will inevitably be called upon to help make “Lazer Team 2” a reality, I implore you to reconsider. Please, Flaming Muskrat, save your money. 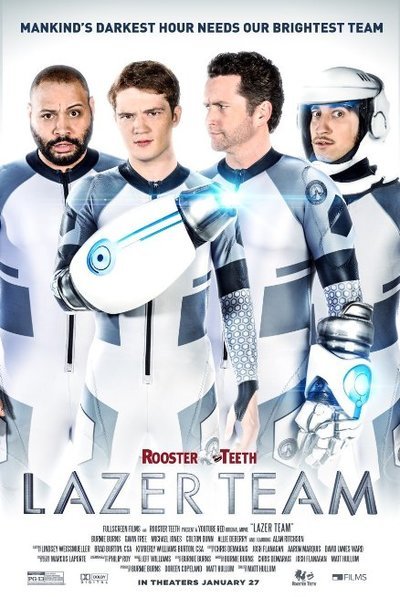