"Last Looks" starts with a montage: a man lives in a trailer in the wild, washing naked in the creek, and listening to apocalyptic predictions on the radio in regarding climate change. He's written on the side of his trailer: DON'T WANT. DON'T ACQUIRE. Got it. We know who this guy is. Or do we? The fun of "Last Looks," and it is often quite fun, is getting to know him. He's been off the grid for a while, but it only takes the slightest tug to draw him back into the smog-covered corruption-filled metropolis of Los Angeles. And so what seems at first to be something along the lines of "Leave No Trace" or "Into the Wild" is revealed, in fact, to be a shaggy P.I. story of the old school (for which I have a soft spot). "Last Looks," directed by Tim Kirkby, with a screenplay by Howard Michael Gould (based on his 2018 novel of the same name) has a familiar form: a disgruntled ex-cop gets drawn into the underworld from whence he came, maybe looking for personal redemption, or at least a way back into the sunlight.

The bearded mountain man is Charlie Waldo, played by Charlie Hunnam, an intriguing actor who chooses interesting material, and appears to choose very carefully. He is in the rare "character actor in a leading man's body" category, and is nearly unrecognizable here with scraggly beard covering his face and neck, crumpled hat pushed down over his eyes. Over the course of the film, he is beaten up over and over again, thrashed by this or that "heavy," cuts and bruises added to his face in every scene. He's a mess.

What draws Charlie out of the mountains is a visit from an ex-flame named Lorena (Morena Baccarin). A famous actor named Alastair Pinch (Mel Gibson) has been arrested for murdering his wife, and Lorena has a vested interest in proving Pinch didn't do it. She begs Waldo to return to solve the case. Turns out, Waldo is an ex-cop who solved a high-profile case and then fell into disgrace. He says he didn't just burn bridges, he "burned the river." Waldo insists to Lorena that he's done, he has "divested," whittling down his possessions "to 100 things." Lorena deadpans, "And you kept that hat?" Waldo eventually caves and bicycles back to Los Angeles (Waldo may have "divested" but he hasn't moved to, say, Idaho, or the Yukon. He is basically right outside Los Angeles, a funny touch).

"Last Looks" features an enormous cast of characters, each with a name as distinct as the guests at Jay Gatsby's famous parties, where it's hard to tell what's a real name and what's a nom de guerre or nom de plume. Charlie Waldo staggers through this bizarre roll call like a man in a maze. He meets: Wilson Sikorsky (Rupert Friend), motormouth head of a television network, Fontella Davis (Robin Givens), Pinch's frustrated famous lawyer, and the murder suspect himself, Alastair Pinch (Gibson), sporting Geraldo-Rivera-style facial hair, who claims he was in an alcoholic blackout when his wife was murdered. Gibson spouts every line of dialogue like he's at the Old Globe, uses words like "élan" and "snifter," and corrects Waldo's pronunciation of "Vase" with "Vahz." It's a very funny performance. Other crucial figures: Don Q (Jacob Scipio, hilarious), Don Q's "heavy" with the diminutive name "Nini" (Deacon Randle), a rapper named Swag Doggg, with three G's. (Swagg Doggg, by the way, is played by Clifford Smith Jr., a.k.a. "Method Man" of the Wu-Tang Clan, as well as his collaborations with Redman. Legend.) Finally, there's Jayne White (Lucy Fry), a first grade teacher with a wild side. Everyone is a potential suspect.

This all sounds like a classic noir, and there are some overt stylistic touches: ceiling fans, Venetian blinds, and a scene in a bar featuring drastic lights and shadows. The noir "nods" are self-conscious set dressing, calling attention to themselves in the midst of the more madcap 1970s vibe of the rest, as the increasingly bedraggled Waldo clambers onto his bicycle again and again to seek out yet another suspect with an unusual name. Shane Black's wonderful "The Nice Guys" is an obvious reference point (including a nod to Christmas in a late scene, a Shane Black motif), although Black's film is more stylistically coherent. "Last Looks" works best in its twisted often-incoherent plot, where no character is generic. Everyone has a secret. No one is on the level. Surfaces lie.

Tim Kirkby is very comfortable in the comedy realm, judging from his television history, and his background filming specials for standup comedians. He skillfully directed the pilot of Phoebe Waller-Bridge's "Fleabag," a sui generis phenom, with wild switchbacks in tone, from raunchy to poignant to thoughtful. (There are so many ways "Fleabag" could have been derailed, but Kirkby set the ship out to sea with sails unfurled to catch the proper wind.) He manages a huge cast here, and everyone is on the same page, tone-wise. This takes real skill. The script makes me want to read the book and is notable in that no two characters talk in the same cadence or flow. Each character has their own rhythm. It's a film filled with unique voices.

Some people might find "Last Looks" frustrating, might find the whole thing artificial or unsatisfying. At one point, Waldo sums up the whole plot to Sikorsky, laying out all he has learned. Sikorsky proclaims in horror, "There are gaping holes in your narrative!" He's right. But it doesn't really matter. 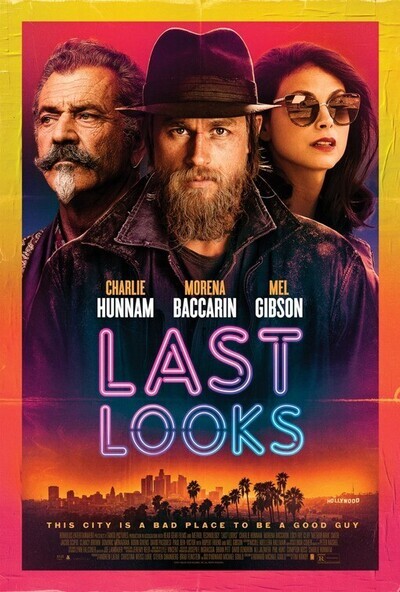