We are always performing a version of ourselves. Through social media: what photos we share, what we write, or what posts we like or retweet. Through first impressions: first dates, job interviews. And, in the age of COVID, the person we appear to be on video through Zoom, WhatsApp, or Skype: the locations from which we call, the outfits we wear, whether we mute ourselves or wear headphones, all those little choices that add up into a certain presentation to people whom we might not know “in real life.” Natalie Morales’ “Language Lessons” navigates all these complexities with a sensitive script written by Morales and costar Mark Duplass, easily charming performances from the pair, and thoughtful emotional intelligence. “Language Lessons” is an alternately comforting and challenging watch, and between this and Morales’s other 2021 directorial effort, “Plan B,” she is making plain the winsome appeal of films about platonic love.

Morales and Duplass star in this tight 91-minute dramedy, which plays out entirely through phone and laptop screens. That method has become more and more common during the pandemic (in films like “Profile” and “Untitled Horror Movie”), and during this time, projects about the tension between our social media lives and our “real” lives have also flourished (“Mainstream,” “Clickbait”). “Language Lessons” strikes a balance between these two visual and thematic approaches. The film begins with a surprise: Cariño (Morales) has been secretly hired by a man named Will (Desean Terry) to teach Spanish to his husband Adam (Duplass). It’s a big investment for both Adam in Oakland and Cariño in Costa Rica: 100 lessons conducted online, which is basically two years of weekly classes. They have to get along, right?

Not only do Adam and Cariño get along, but they become fast friends. Adam is already quite conversational in Spanish because of a childhood spent in Mexico, and so his and Cariño’s first lesson is more relaxed than instructional. He worries that he’s mansplaining, and the two share a laugh when trying to come up with a Spanish version of the concept. He worries that his and Will’s large house and clearly well-off lifestyle might be off-putting for Cariño, and tries to explain that the couple has only really come into money in the past few years. And when Adam insists that he is “embarazado,” Cariño gets the opportunity to correct his Spanish and emphasize that her lessons won’t be provided in vain.

When an unexpected tragedy strikes, the pair’s bond becomes deeper. They talk constantly, trading messages back and forth outside of their lesson time. They unexpectedly share details of their lives. Their lessons veer further and further away from educational content, and more and more toward genuine friendship. But how much do they really know about each other? The way Adam switches up the locations from which he calls Cariño—his home’s many rooms, his sauna, his pool, his hot tub, his balcony, his large property—projects a certain image, as does the fact that Cariño only ever calls from one room in her home or from outside. Could their presumed class differences affect their relationship? What about the details Cariño divulges to Adam about her other students, or the details Adam divulges about his life before he realized he was gay? How does a bond that started out professionally become complicated, or even compromised, when other emotions develop?

This question has played out in a romantic way over and over again in movies, and so the twist “Language Lessons” provides by framing it in purely friendship terms is welcome. The film is divided into thematic “lessons” explained by English and Spanish intertitles (like Immersion and Inmersión or Context and Contexto), and those boundaries help give the film structure and a discernible sense of time.

Morales and Duplass have an effortless chemistry that shines through the confines of cellphone and computer screens, and their nuanced deliveries of the film’s naturalistic dialogue helps them avoid overselling certain emotions. They’re alternately zany and fragile, vulnerable and goofy, and angry and defensive, and how they communicate that range is relatable: faces leaned in toward the screen and wide smiles vs. eyes diverted away from the screen and standoffish body language. And purposeful technical lapses (fuzzy or frozen shots, dropped dialogue) are more tolerable and appropriate than the film’s recurring use of background music while the pair chats, which sometimes feels overly slick and more “cinematic” than the rest of the realist “Language Lessons.”

An array of late-film reveals fall like dominos, and “Language Lessons” lurches a little too quickly into feelings of resentment in its third act: “What’s the narrative you’ve created?” one of them demands from the other when discussing their friendship. That moment circles back to the script’s initial questions about how we present ourselves and how others judge us, but how “Language Lessons” sidesteps truly engaging with the final antipathy it introduces ends the film on a bit of a down note. Perhaps Morales and Duplass felt a need for penultimate conflict before the film’s ultimately bittersweet ending, but the solution they provide for their doubt lands shakily. Before that second guessing, though, “Language Lessons” is an emotionally intricate watch that didn’t need manufactured drama to make an impact. 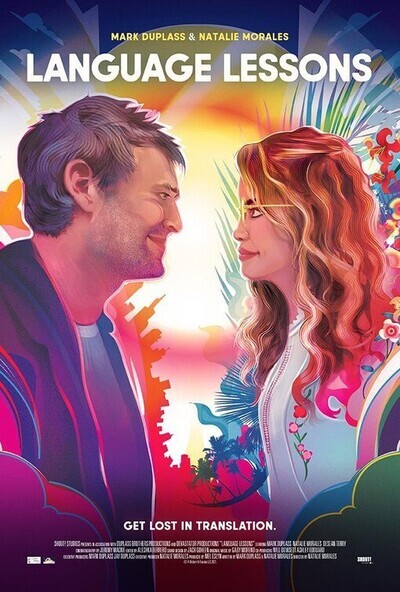 Desean Terry as Will