When we first see Sgt. Rasmussen (Roland Møller) in the opening moments of the Danish drama “Land of Mine,” he’s driving along in a Jeep with a look that recalls Woody’s Harrelson’s derelict cop at the opening of “Rampart”—jut-jawed, determined, a fierce, unforgiving gleam in his eye.

It is the spring of 1945. Germany has surrendered and its forces are leaving Denmark after occupying it for five years. Driving by a column of bedraggled German soldiers, Rasmussen spots one carrying a crumpled Danish flag. He screeches to a halt, jumps out of the Jeep and head-butts the man fiercely, screaming, “That’s not your flag!” And that’s not the end of it. While the dazed man lies on the ground, Rasmussen continues pounding him with his fists, till there’s blood all over his face, the ground and the flag.

Such a display of anger at the Nazi occupiers on the part of a Dane is understandable, but it’s only individual. The punishment described by writer/director Martin Zandvliet in “Land of Mine,” though, is collective. It involved using numerous German soldiers to clear hundreds of thousands of land mines that the Nazis had left buried along the Danish coast, resulting in the deaths of many.

Rather curiously, the film itself doesn’t say what its press notes spell out: under the international treaties of day as well as the 1949 Geneva Convention, this action—which was ordered by the British but carried out by the Danes—was a war crime. According to Zandvliet, it has never been dealt with adequately in Danish histories or public discussions of the period.

Granted, there are large and very obvious reasons why Nazis have been portrayed as the most brutal of human monsters in the popular mythology of the movies. But it was always a simplification that invited correction. In 1981, Wolfgang Petersen’s “Das Boot,” about the perils of life aboard a Nazi U-boat, became an international hit in part by humanizing the servicemen whose lives it dramatized. “Land of Mine” belongs to the line of mostly European films that have continued that effort.

Its task is simplified somewhat by the fact that the Nazi Reich has been reduced to smoldering rubble by the time the story begins, and the Germans we see are scared, skinny kids drafted into the army near the war’s end—most look in the 15-to-17-year-old range. In an early scene, Danish officers explain to them that Denmark’s coast was the most heavily mined in Europe, apparently because Hitler expected the Allied invasion to come there since it was the closest land point to Berlin. More than two million mines were left behind.

How many have seen mines, the boys are asked. Only a few hands go up. So, the Danes provide instruction on this very perilous undertaking. It involves taking a stick and probing the sand till a mine’s metal bulk is detected, then gently removing it from the sand and defusing it by unscrewing and extracting the trigger. Needless to say, one wrong move and life or limb can be sacrificed.

When the story proper begins, Sgt. Rasmussen is in charge of 14 young Germans in a makeshift camp near a beach. (The press notes don’t say whether a group of prisoners was commonly left to a single Dane; it seems a little improbable.) At first, he seems as a fierce as he did in that first scene. He tells the boys there are 60,000 mines buried on a nearby beach; if they remove six an hour, they can go home a few months hence—assuming they don’t blow themselves up while executing their task.

In the tale’s first stage, the Dane treats his charges in a fashion that verges from screaming ferocity into near-sadism. We’re never told the slightest bit about what his particular beef against the Nazis is; we can just assume that as a Dane he has some serious ones. After practically starving the boys and lying to them about one of their number who was injured, however, he begins to soften, to see them as individuals and treat them like actual human beings. Later still, an incident that he blames them for sends him tilting back toward hostility.

These shifts of attitude on Rasmussen’s part can feel a little too abrupt and formulaic in enforcing the dramatic pivots of a standard three-act structure. Nevertheless, the film remains generally believable and consistently engaging due to the high quality of its execution. As Rasmussen, Møller, who has a chiseled Nordic demeanor akin to Michael Fassbender’s, gives a terrific performance, both intense and carefully shaded. The German boys are very well cast, with young actors Louis Hofmann and Joel Basman especially giving the kind of striking performances that should lead to other films.

Zandvliet has said he and his cinematographer wife Camilla Hjelm Knudsen looked to certain films of the 1960s as inspiration for the look of “Land of Mine,” and the influence is salutary. With its muted colors and naturalistic lighting the film aptly captures the beauty of seaside locales that frame the human struggle at the story’s heart. 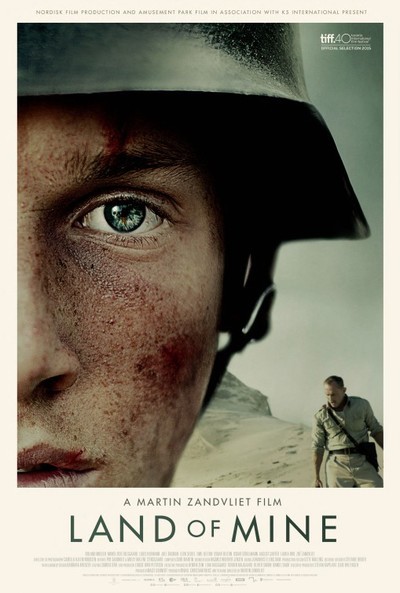 Rated R for violence, some grisly images, and language.