After more than a decade away, a man returns to his former home outside a village in Colombia in order to help his estranged family in their time of need. He meets the daughter-in-law he'd only heard about, reunites with his ex-wife, and seems a bit surprised at the sight of the five-year-old boy who answers the door and asks the older man if he's his grandfather.

We first see Alfonso (Haimer Leal) from a considerable distance, slowly walking toward the camera on a dirt road surrounded by stalks of sugarcane. He seems to come as from the ether. Before we can get a glimpse of his face, he disappears in a cloud of dust from a passing truck.

This is a man whose past and present fit comfortably inside the small suitcase he has owned for decades. Where this man has been, what he has been doing, and why he has been out of contact with his family for all these years are, perhaps, vital questions. They don't matter, though, in these first moments of introduction and reunion—or indeed for most of the film. What does matter is that the man is here for his family now.

Writer/director César Augusto Acevedo's "Land and Shade" is a film of uncommon restraint and considerable compassion. It presents a seemingly helpless situation and focuses on the tiny, fleeting moments of regret, resentment, reconciliation, hope, loyalty and love within and between these characters.

Through those moments, a precise, detailed picture of this particular family forms. There's a degree of external conflict here, mostly to do with a corrupt farming industry and a workers' strike, but it's kept to a minimum. The vast majority of the story's conflict is in the way the characters react to their circumstances.

Under those circumstances, the bonds between this family are tenuous, although a significant portion of that fragility is on account of the bonds themselves. Each character understands that their relationships are an essential parts of their lives. As with any family, there are various relationships within this unit—between fathers and sons, mothers and sons, wives and husbands. With financial and physical strains taking their toll, it's inevitable that a character's efforts to preserve one relationship will come at the cost of harming another.

The film's conflict is primarily about the impossible task of prioritizing these connections. How, for example, can a man possibly decide between his roles as a son, to a mother who already has been abandoned and who relies upon him for the necessities of living, and as a husband, to a wife who wants to leave her husband's childhood home because she is convinced there is nothing there for her own family? How can a woman choose between staying with her sick husband and leaving him to die in order to provide her son with a better chance at life?

Gerardo (Edison Raigosa) is a son, a husband and a father. He is slowly but surely succumbing to a potentially fatal respiratory illness. His mother Alicia (Hilda Ruiz) refuses to leave her home in the middle of the acres of sugarcane, because this place is where she has made her life. His wife Esperanza (Marleyda Soto) knows that this place will offer nothing for the future of their son Manuel (José Felipe Cárdenas).

She also knows that the constant burning of the cane, which results in a nightly rain of ash upon the family's home, is killing her husband. Meanwhile, Alfonso takes to doing the household chores and tending to Manuel. He may have abandoned his family, but he is, as Esperanza points out, a good man who has made mistakes. All of these characters have erred to one extent or another, but there is no blame to be passed to any of them.

There also are no easy answers to the scenario Acevedo has established. Gerardo, like his mother, is too stubborn to listen to the obvious—too loyal to and worried about Alicia to even consider leaving her. Everyone is convinced that he will regain his health with bedrest and the windows of his room closed, to prevent the dangerous ash from filling his lungs.

It's the blind conviction of people who are convinced that nothing bad can befall a loved one, even as all evidence—the way Gerardo's breathing gradually becomes raspier and more strained—points to the contrary. It's the same sort of conviction that pits Esperanza, who—with her mother-in-law—has taken over her husband's job of harvesting the crop, against her co-workers in the sugarcane fields. They haven't been paid in weeks, and the bosses have plenty of excuses to guarantee payment "tomorrow."

The rest of the crew wants to strike. Esperanza worries that all of her hard work will be for nothing if the bosses decide that striking workers aren't worth paying at all. Acevedo obviously has a political point to make here, but the argument is so inextricably linked to the family's struggles that it never overreaches or preaches.

Acevedo and cinematographer Mateo Guzmán observe these interactions from a distance and with an almost impassive sense of objectivity. There are long takes with minimal or no camera movements—a tableau of Gerardo's family at his bedside, a static shot from afar of three generations of the family enjoying the shared knowledge of birdcalls, a heartfelt embrace in the night when Esperanza learns that her son's birthday was not ruined on account of her extended work day, or a simple dolly shot that follows Alfonso teaching his grandson to fly a kite. The film lingers on these moments. It allows them to breathe and offers us a chance to savor Acevedo's naturalistic approach, which extends from the lighting to the performances.

As circumstances worsen and the characters realize that they must make certain difficult decisions, the camera gets closer. Acevedo keeps us at a comfortable distance for so long that there's a visceral impact to witnessing the consequences of action and inaction on such an intimate level. Even as the world literally burns around this family, "Land and Shade" continues to be about those moments of loyalty and love, albeit with the somber realization of their price. 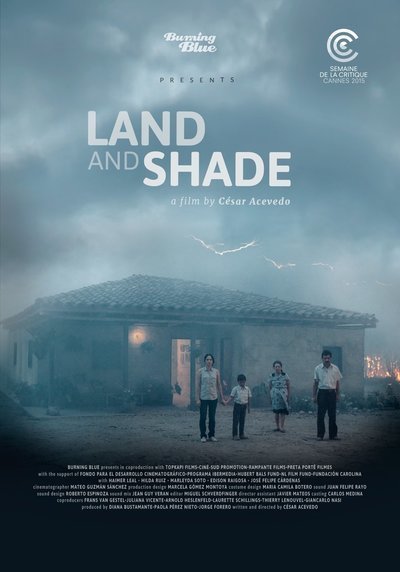