Some time in the first hour of “Labyrinth of Lies,” its lead character—a young, ambitious, late-'50s German prosecutor named Johann Radmann—begins to learn the scope of the crimes he’s decided to investigate in the hopes of breaking out of trying traffic violation cases. A former Nazi party member has been found to hold a teaching position nearby; this violates German law, although most of the bureaucrats overseeing this sort of thing have been happy to look the other way. It emerges that the school employee was a guard at a place called Auschwitz. Although the Nuremberg trials have already taken place, German reporting on the international court had apparently been sketchy; Radmann’s never heard of Auschwitz, and neither have many of his friends and colleagues.

Radmann soon finds out enough, and when doggedly pursues justice, never reflects on whether he might have bitten off more than he can chew. Neither does the movie itself, directed by Italian-born actor Giulio Ricciarelli, most of whose filmography is German-based. Ricciarelli co-wrote the script with Elisabeth Bartel, and while the movie’s lead character is what they call a composite, the movie is fact-based, concerning the first prosecutions of Nazi war criminals within Germany itself. There’s a compelling cinematic story here, perhaps, but Ricciarelli’s movie is too diffused and scattered and, especially in its first hour, too reliant on commonplaces. Radmann, played by the handsome but rather stiff Alexander Fehling, is an almost too-good-to-be-true fiction, the guy who stands in the hallway in an overhead shot while the rest of his colleagues are going to their offices, and then retrieves from a wastepaper basket a document about that Nazi “case” that none of his fellows want to touch with a ten-foot-pole. He collaborates with a fiery, feisty German journalist named Gnielka (André Szymanski) who introduces him to the world of postwar, pre-counterculture Euro bohemia, and these scenes have a certain charm. But crusaders, victims, and perpetrators are all painted with the standard contemporary brush; the bad guys have just enough banality of evil, the survivors have the clichéd mix of defeated slouch and stiff spines, and so on. It’s rather tiresome, with the bonus of making the viewer feel bad about finding it tiresome. Which means, finally, that it’s a betrayal of the reality it’s trying to portray, and one would be better of re-viewing “Shoah” again.

Radmann becomes obsessed with tracking down one particularly heinous Auschwitz denizen, one Dr. Josef Mengele. If you don’t know how that pursuit turns/turned out, well I won’t “spoil” it for you…but by the same token, you should be ashamed of yourself. As Radmann goes off on his own tangents, his boss, the Attorney General Bauer (Gert Voss) tries to straighten his focus, working an agenda of his own.

As the movie progresses, story themes emerge that are more actively interesting, although they’re not explored with any particular artistry. The deeper Radmann digs, the more Nazis he finds. Pursuing a line fleshed out in the controversial history account “Hitler’s Willing Executioners,” Radmann discovers that no one is innocent, not even those he once most admired. This proves tough to him to handle. There’s a potentially searing psychological drama in this kind of stuff, and while Ricciarelli does use the material to underscore an object lesson on what the true nature of investigation and justice ought to be, he doesn’t take any meaningful artistic advantage of the material. So the movie winds up being—to put it kindly—mildly intellectually satisfying while entirely emotionally flat. In an interesting side note, an American Army officer who oversees wartime archives, and reluctantly (at first) assists Radmann in his research, is played by one Tim Williams, whom American viewers may recognize as the somewhat smarmy dude in the ads for travel-discount website Trivago. He’s sarcastic but not particularly creepy here and he speaks excellent German, for what it’s worth. 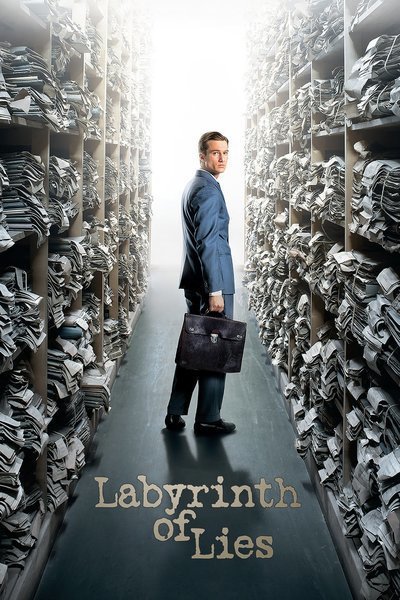 Rated R for a scene of sexuality